Knicks Head Up to Boston Looking for First Win 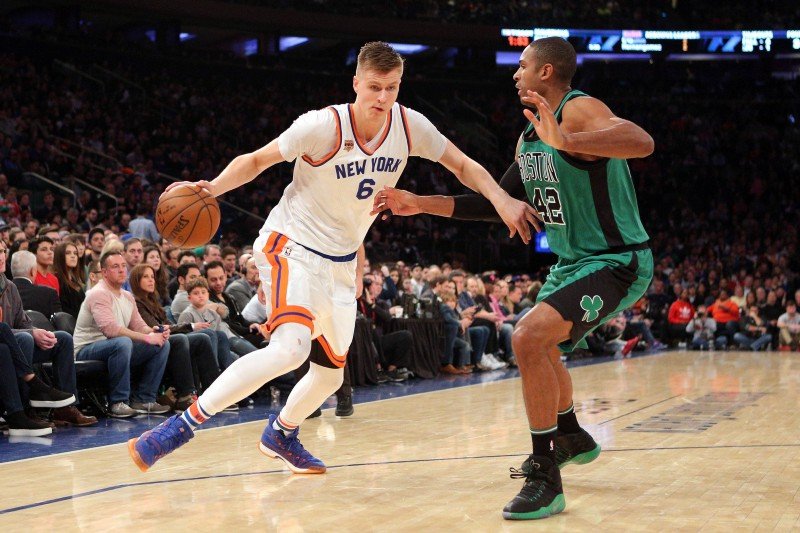 The Knicks head up to the other Garden to take on Kyrie Irving and the Boston Celtics.

The regular season has treated the Knicks as well as the preseason did. Kristaps Porzingis is looking for his first win to usher in his new era, though none of the fault can fall on his shoulders. KP has been on fire on the offensive end. Through two games he is averaging 32.0 points, 8.5 rebounds, and 1.0 blocks with an effective field goal percentage of 54.4.

His supporting cast on the other hand has been underwhelming. Stop me if you’ve seen that sentence before. Tim Hardaway Jr. has struggled shooting (36.5 eFG%), but his confidence remains unwavering. He is not the one Knicks fans should be worried about. Rookie Frank Ntilikina (and the point guard depth in general) is the main cause for concern, along with Willy Hernangómez playing four more minutes than you and me this season.

Tonight, Porzingis and the Knicks try and get in the win column against a divisional foe, the Boston Celtics. Gordon Hayward may very well be done for the season, but Kyrie Irving presents a match up nightmare for the backcourt. The mismatches do not stop at point guard. The Celtics should have the advantage on the wings as well, but the Knicks will have an advantage on the blocks.

As mentioned above, Willy has played just four minutes this season. Hornacek has cited defense as the reason for the lack of playing time. I call bullshit on that, and believe there are other reasons not being mentioned for his informal benching. Porzingis has not been good with Kanter and we already know he plays well with his close friend:

Whatever the case is, this is the perfect game to integrate Willy back into the fold. The Celtics are stacked at guard and along the wings. Down low is where the Knicks can take serious advantage of Al Horford and company. Enes Kanter will likely start, and Kyle O’Quinn has deservedly carved out minutes as the backup, but Willy remains the most talented of the three.

Hornacek has reportedly been impressed with Willy in practice. Does this mean we finally get to see a guy who should’ve been starting from the jump? Hopefully. Porzingis has subtly put the pressure on his coach.

From strictly a scoring perspective, Porzingis has not disappointed. KP has been pouring in buckets like he’s playing Pop-A-Shot. Despite his back-to-back 30-point performances, his team is 0–2. Welcome to life as the face of the Knicks. Somewhere in the sticks of OKC, Carmelo Anthony is grimacing.

Carmelo faced similar issues for the majority of his Knicks career, and Porzingis is now getting a taste. Defenses will only care about him. The Celtics will likely throw multiple people Porzingis’ way tonight. He has to use this to his advantage. So far he has made a concerted effort to move the ball. His assist percentage is at a career-high 9.8, but only has three assists on the season.

His wing players missing has not helped. Hardaway Jr., Courtney Lee, and Doug McDermott are currently struggling from the field. When those shots start dropping, Porzingis’ assist total will start to bump. As long as the Knicks are without a true facilitator on the floor, KP’s continued development as a passer will be important.

Matchup of the Night: Jaylen Brown vs. Tim Hardaway Jr.

Following strong shooting in the preseason, Hardaway Jr. has had trouble tickling the twine. He is currently shooting 29.4 percent from three and 26.9 percent from the floor. That’s not going to cut it for a second option, and Timmy knows that. Last game against the Pistons he managed to score 14 points but needed 16 shots to get there. André Roberson and Avery Bradley represent difficult matchups for THJ thus far, but his struggles can’t be overlooked.

Tonight, life does not get any easier. Marcus Smart is going to be a game-time call, which means the lanky Jaylen Brown will be tasked with defending the Knicks’ starting shooting guard. Brown projected as a terror on defense as a rookie and has done nothing to dispel that assumption. Buckets have been hard to come by for his counterparts, so Hardaway will have to exhaust his full repertoire. He’s already proven that he will not stop shooting, which is a positive, but shooting with a variety and purpose is what we are looking for tonight.

To score on Brown he will have scratch and claw and attack the hoop. THJ has not been to the free-throw stripe nearly enough this year, a place that will allow him to diversify his scoring. Brown is still young, so pump fakes could be THJ’s best friend. Porzingis needs help, and he must become that reliable second option.

Tip off is set for 7:30PM tonight on MSG Network. Rookie Frank Ntilikina will not play tonight with a sore ankle.