Knicks Head to Miami For Second Game of Two-Game Series 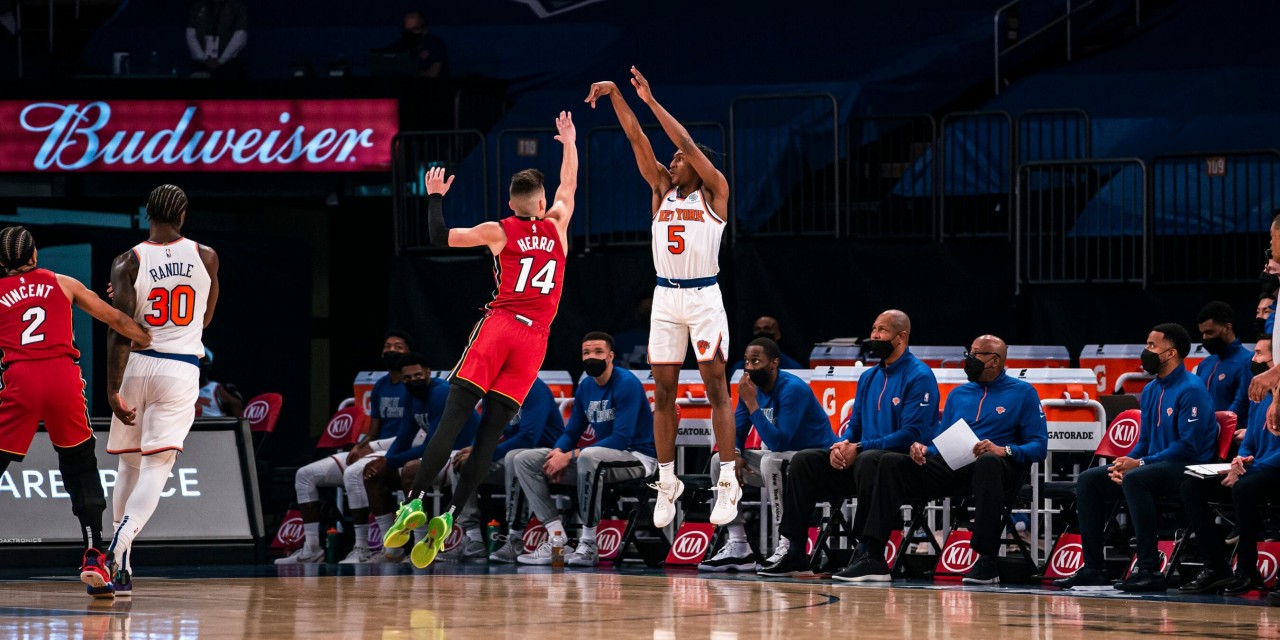 After folding down the stretch in New York, the Knicks travel to Miami for a rematch with Jimmy Butler and the reigning East champs Heat.

The New York Knicks (11-14) will play the Miami Heat (9-14) for the second game straight, this time at American Airlines Arena, on Tuesday at 7:30 p.m. ET. On Sunday at Madison Square Garden, the Knicks snapped a two-game winning streak with a loss to the Heat, 109-103.

Julius Randle had another All-Star-like performance scoring 26 points on 10-of-18 shooting to go along with 13 rebounds and seven assists. However, R.J. Barrett had one of his worst games of the season, scoring just three points in 19 minutes—a major reason for the Knicks losing the game. For the Heat, center Bam Adebayo had 24 points, 11 rebounds, and seven assists, while Jimmy Butler had 17 points, 10 rebounds, and nine assists.

Currently, the Knicks sit outside eighth in the Eastern Conference by a half-game. The Heat are 12th, two games back in the win column. However, Miami’s record and defensive stats are a bit deceiving, as Butler has only played in 11 of 23 games this season. Furthermore, point guard Goran Dragic has only played in 17 games and second-year guard Tyler Herro has only played in 16. Dragic didn’t play Sunday against the Knicks and won’t play again on Tuesday with an ankle injury. Avery Bradley is the only other Heat player that receives significant minutes who will miss Tuesday’s game. He has a calf injury.

Even with these injuries, expect the Heat to make a charge up the conference, as they’re still a team that can compete with the best of the Eastern Conference as long as Bam Adebayo and Jimmy Butler are on the court. That being said, here are three storylines to look out for during Tuesday’s game.

Reggie Bullock led the way in that categories hitting seven of his 14 three-point attempts. Both Alec Burks and Julius Randle poured in a trio of threes each. With Bam Adebayo clogging up the paint, making outside shots is crucial when you play the Heat. Since the Knicks don’t shoot a lot of treys, the Heat are a matchup nightmare for them.

BIG 3 FROM BURKS THE BUCKET pic.twitter.com/onuVbCMWLo

Players like R.J. Barrett, Immanuel Quickley, and Austin Rivers are going to have to have good shooting games in addition to the three players who hit multiple threes on Sunday in order to get a win in Miami.

Other than the actual game played, the big storyline on Sunday was the Knicks’ trade for Derrick Rose. It is currently unknown whether Derrick Rose will be making his Knicks debut on Tuesday or not.

Rose, the 32-year-old point guard, averaged 14.2 points per game and 4.2 assists per game on 42.9% from the field, 33.3% from three with the Pistons in 15 games this season. With Elfrid Payton and Immanuel Quickley getting all the point guard minutes, it will be interesting to see how that changes with Rose now in the fold. Rose may see minutes at shooting guard, affecting Rivers’ minutes more than Payton and Quickley. However, Tom Thibodeau obviously has a history of playing Rose significant minutes at point guard.

Excluding the Rose news, there will be a lot to watch with the rotations after Sunday’s game against the Heat. In that game, Payton played 31 minutes compared to Quickley’s 17, and Barrett only played 19 minutes compared to Bullock and Burks, who got 31 and 29 minutes, respectively.

The Barrett minutes were likely just a one-game fluke, as he’s averaging 35.1 minutes on the season, and Bullock was having the best game of the season. However, Payton has played 33.6 minutes per game over the Knicks last 3, compared to Quickley, who’s only played 14.4. With Quickley averaging 22.9 points per game per 36 minutes, it’s hard to imagine him somehow doing anything more to change this pattern going forward. Quickley’s first stint in each game will determine how many minutes he plays unless Payton is traded anytime soon.

RJ finally gets on the board with a 3 pic.twitter.com/0hIfDIjwHk

Per the Marc Berman of the New York Post, Nerlens Noel is questionable for Tuesday’s game with a sore knee. Noel has missed the last two games and, as a result, Taj Gibson is seeing backup center minutes.

C Nerlens Noel, who has missed the last two games with a sore knee, has been upgraded to questionable for tomorrow's game vs. Miami, per NBA official.