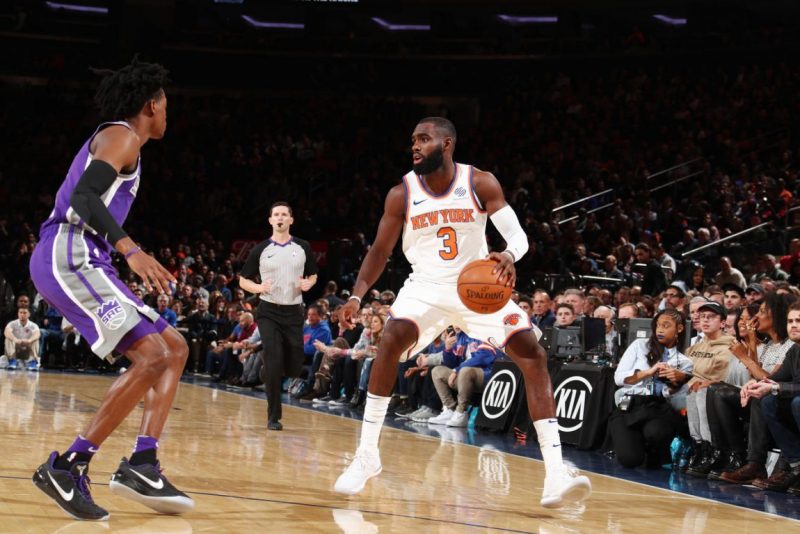 In a matchup between two listless squads, the Knicks head to California to take on De’Aaron Fox and the Kings.

The Knicks (24-39) venture to Sacramento Sunday night in a classic March tank-off. The Knicks are 1-9 in their last 10, and enter The Golden 1 Center on a three-game losing streak as the team embraces “play the young guys” mode. Not to be outdone, the Kings are 2-8 in their last 10, and have won just nine of 30 home games this season.

The Kings (19-44) rank second to last in points per game, 27th in pace, 27th in assists, last in offensive rating, and 29th in defensive rating (good work, Vlade!). Their leading scorer is friggin’ Zach Randolph, putting up just 14.8 point per game, though rookie De’Aaron Fox (15.4 point per game since the All-Star Break) and rookie-game MVP Bogdan Bogdanovic have been the team’s best bucket-getters recently.

The Knicks, meanwhile, have performed (relatively) well since they’ve allowed a younger, more athletic bunch to see heavy minutes. They’ve hung tight with the Celtics, Warriors, and Clippers before ultimately falling behind in second-halves.

There won’t be a whole lot at stake in this one, but here are a few other notes on tonight’s affair:

• The Knicks’ young guys have been in intriguing to watch, and their wonky lineups have been fun experiments to see play out, unless you’re Michael Beasley. Beas has been struggling mightily in recent weeks, and called out his teammates for, ironically, not passing the ball more. He also tweaked his ankle, so we’ll see if he sees the floor tonight, or if the team’s ball movement improves.

• This could be a randomly fun point guard game. Allen Iverson Trey Burke (20.5 points per game over his last four games), Emmanuel Mudiay, and Frank Ntilikina are getting plenty of run as they aim to carve out a role for next season. Fox, meanwhile, has elite speed and athleticism for his position, and fellow rookie Frank Mason Jr. has shown some promising signs at times.

• The Knicks re-upped Troy Williams for the rest of the season, much to the delight of Knicks fans. Williams has played well since being promoted from the G League, and, more importantly, he’s the only Knicks player capable of doing stuff like this:

• 41-year-old Vince Carter is still playing heavy minutes for Sacramento (17.4 minutes per game this season!), which makes me happy.

• Lady Bird is a lovely and authentic coming-of-age story about a young woman coping with her relationship to the city of Sacramento, written and directed by Sac-native Greta Gerwig. We’ll see if it gets some Oscars love tonight, but if you’re looking for a current Sacramento product to watch for two hours, I highly recommend this film over the Kings in general.