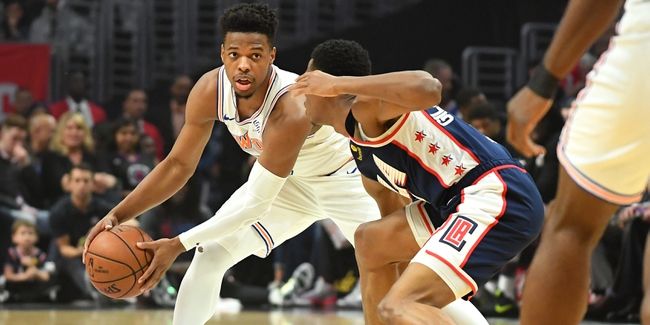 The Knicks were thoroughly decimated, giving up 82 first-half points in L.A. to the Clippers, losing in a final score of 128-107.

The New York Knicks (13-50) were demolished by the Los Angeles Clippers (36-29) in a Sunday matinee that everyone would sooner forget. Here are the key notes from New York’s second straight loss, this one from Staples Center.

Landry Shamet and the First Quarter

Rookie Landry Shamet lit the Knicks up in the first quarter, shooting 6-of-8 from three in the opening minutes. For some reason, the Knicks never quite got to him on the perimeter. And when they did, it was a bit too late.

The rest of the Clipper team had success as well. Los Angeles notched 12 assists in the first quarter alone.

Deficit Growth in the Second

The Clippers continued to demoralize the Knicks by getting inside and then dishing to the perimeter, killing the Knicks on inside shots and from three. Former Knick Danilo Gallinari had a strong first half, shooting 7-of-10, while the rookie guard Shai Gilgeous-Alexander looked like a pro, shooting 4-of-5 from the field and 2-for-2 from three.

Mudiay was the only double-digit scorer for the Knicks in the half. He had 11.

The 82-46 halftime deficit was enough to turn the game off and reluctantly spend time with your family.

The third quarter was a bit more successful for New York, with Noah Vonleh bringing a lot of energy; he scored their first eight points on an inside shot, an and-1, and a three-pointer. For a while he looked like his old self.

The Knicks even looked lively. Near the end of the third quarter, the Knicks went on a 13-0 run led by second-year guard Damyean Dotson to bring the lead to a (manageable) 22 points.

Allonzo Trier, Mitchell Robinson, and Vonleh somehow made the fourth quarter watchable, a feat greater than any comeback (okay, not really, but I was still interested in the game).

Undrafted rookie Allonzo Trier was 3-of-3 from three for most of the fourth quarter—shooting uncharacteristically well from beyond the arc. The former Arizona Wildcat had some nice finds including a Mitchell Robinson lob. Iso Zo finished with 16 points and four assists.

ZO TO MITCH, INJECT IT INTO MY VEINS pic.twitter.com/D1jI6P6kB4

Mitchell Robinson made his game-changing impact later than usual. Robinson picked up three fouls early in the game and that partially explains the early deficit. However, when he returned, oh boy did he return. Robinson notched two of his four blocks early on, asserting himself on the court. Robinson grabbed a slammed a couple of lobs, but the blocks were just as impressive, if not more. His two swats on Harrell, especially the last was his way of announcing to the big men, “I have arrived.”

Noah Vonleh’s third quarter outburst felt like a scene out of Space Jam 2 where LeBron James gets his powers taken by Vonleh and Vonleh terrorizes a Clippers team. In all seriousness, it appeared like he’d found the peak performance he had earlier this season. Vonleh ended the game with 17 points, 12 rebounds, three assists, and one block. It’s hard to argue against paying Vonleh good money this summer when he does a bit of everything on offense and gives you an honest to goodness effort on defense.

Once again defense led the way in this #KnicksTank game. Often times, the Knicks’ defensive rotations left a man open in the corner. The Clippers penetrated with ease and had excellent spacing on the perimeter. The inexperienced and sluggish Knicks couldn’t keep up, so the Clippers looked like the Golden State Warriors as they kept their playoff hopes alive.

There wasn’t a lot to cheer for in this game. Two of the three rookies played well, but it was still an embarrassing loss. The Knicks play Sacramento on the back end of this back-to-back. If they can match their fourth quarter intensity, perhaps they’ll stand a chance.