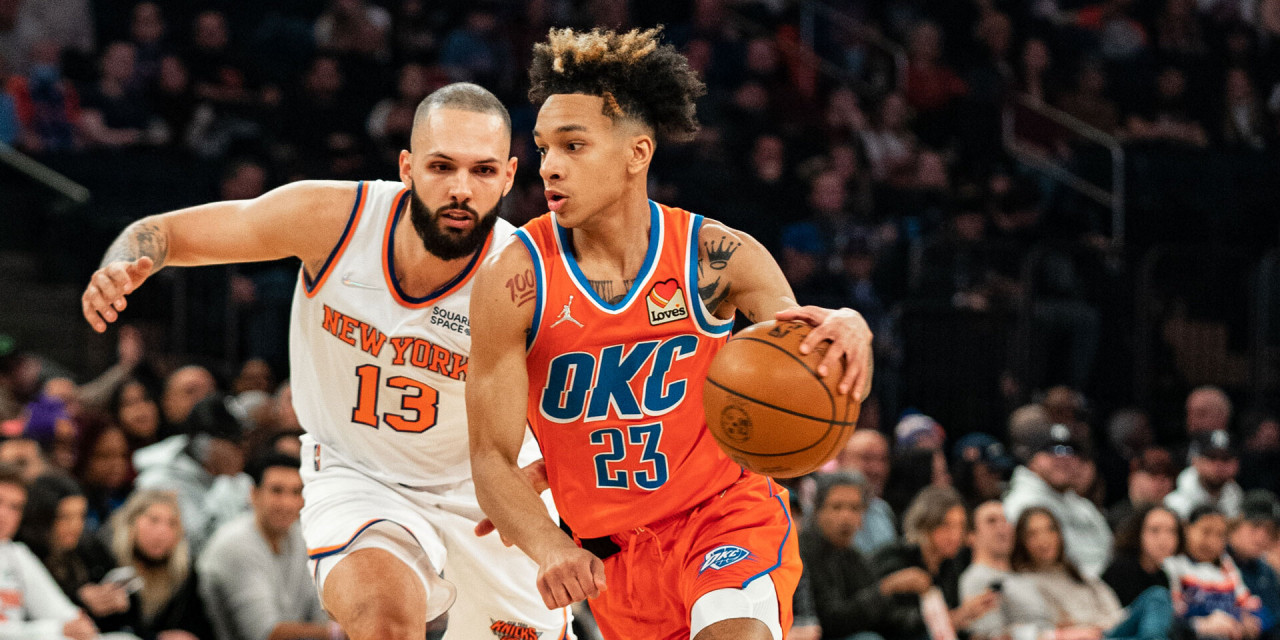 Despite the season’s first triple-double from Julius Randle, the Knicks defense was paper-thin against Josh Giddey and the shorthanded visiting Thunder.

The New York Knicks (25-33) were defeated at home by the Oklahoma City Thunder (18-39) on Valentine’s Day, 127-123, featuring much love lost due to the performance of the ‘Bockers squad. It was a dogfight throughout, as a typically inefficient OKC team was able to respond to anything New York did offensively while playing much tighter defense than the home team ever did during this OT loss.

The Knicks were looking to right the ship after a lackluster road trip and dropping eight of the last 10 games. Even so, they were just 1.5 games back of the Atlanta Hawks and Washington Wizards for the 10th seed, which would be needed to get into the play-in tournament. RJ Barrett sat out again with an ankle injury, and Quentin Grimes was tapped to start in his place for a third game in a row.

The first quarter began with a bang in the form of a three from Kemba Walker, who was coming off a 23-point performance on Saturday night. After that, though, Josh Giddey showed off his passing and scoring skills with the Thunder quickly going up by eight on New York with just over eight minutes to go in the first period. It took a while for New York’s defense to come to life at the start of the game, but once it did, the starting unit began to click. Evan Fournier (10 first-quarter points) was especially effective, and Mitchell Robinson (seven points, three rebounds, and two steals in the first quarter) looked free of discomfort as he showed off some handles and his finishing skills in the paint. However, the Knicks’ defensive intensity leveled out as the quarter finished up, and they were only up two leading into the second.

The Knicks went with their bench to start the second quarter. It was a back-and-forth scoring affair for both teams, which featured a highlight dunk from Obi Toppin off a feed from Immanuel Quickley. Once the starters for New York trickled back onto the court, their ball movement and cohesiveness seemed to return. But they were still allowing the 30th-ranked offense of the Thunder to answer all of the Knicks’ shots. Giddey continued to slice up any defensive front the Knicks showed he and OKC, but New York continued to battle. Robinson was especially dominant with 11 points and eight rebounds as he and Julius Randle were pushing the pace. The quarter winded down with answer after answer from both squads, but the Knicks were able to hold on to a one-point lead after two quarters of fast-paced play.

Out of the halftime break, New York came out shooting. Fournier and Grimes hit back-to-back three-pointers, forcing an OKC timeout early on into the third quarter. Grimes continued to get hot from beyond the arc and helped extend the Knicks’ lead to double digits nearly halfway through the period before the Thunder and Giddey came right back into it with unselfish ball movement and paint penetration to pull back to within two points of the sputtering ‘Bockers. As the quarter was finishing, the Thunder had regained the lead off of a handful of made threes and sequence after sequence of no offense from the Knicks. Some late quarter heroics from Randle and a buzzer-beating layup from Fournier helped New York take the lead to wrap up the third, but the Knicks needed to step up their defense if they wanted to close it out against the Thunder.

New York began the fourth much like the last three quarters: their ball movement providing a spark, followed by an answer from OKC at the other end of the floor. They desperately needed to string together some stops to try and get any separation between themselves and the battling Oklahoma City youngsters. It was starting to feel more like Groundhog Day than Valentine’s Day at the Garden as the Knicks kept failing to maintain a lead for more than a possession or two. Randle was able to record his first triple-double of the season with just over six minutes left in regulation, and the Knicks had some luck on their side down the stretch with the Thunder missing several clutch free throws that would have tied the contest up or given OKC the lead. It was a close game until the last second of regulation, with Grimes hitting a fast-break layup, which was responded to by a Darius Bazley layup for OKC. The game remained tied after an attempted game-winner by Randle hit the front of the rim as the contest headed into overtime.

In overtime, New York’s offensive struggles continued. Shots were simply not falling and they were becoming stagnant with OKC getting anything they wanted and quickly going up by four with three minutes to go in extra time. Even with some big shots from Evan Fournier, the Knicks were simply plagued by their inability to close out on any Thunder players. Randle, who had another fantastic offensive showing, had a costly turnover with thirty seconds left in OT while being down four. With five seconds left, New York needed a three-pointer to tie it up again and force double-overtime. A play was set for Immanuel Quickley, who had a nice look from the corner but could not get the three to fall. The Knicks ultimately lost by four in another close game to a team they should have been able to put away.

Randle led all scorers for the Knicks with 30 points and also recorded 13 rebounds and 10 assists while Thunder guard Tre Mann scored a new-career-high 30, too. Fournier had a late explosion for 29 points. He also had four rebounds, five assists, and two steals. Giddey finished with a triple-double for the young Australian—28, 11, and 12. Grimes had another good start for New York, scoring 19 points and grabbing seven rebounds. Mitchell Robinson was dominant after a poor showing during the Knicks’ Saturday loss to the Blazers, scoring 14 points and grabbing an obscene 17 rebounds. Kemba Walker looked solid to start but waned as the game progressed and finished up with nine points and five assists.

Alec Burks scored 11 points and collected six rebounds off the bench. Obi Toppin had seven points and two rebounds in just eight minutes on the court. Cam Reddish and Taj Gibson had two points each, with Gibson able to grab four boards as well. Quickley had a solid night facilitating for his teammates, dishing out five assists. However, he did not score at all—another blemish on his sophomore campaign.

The Knicks will be at home again on Wednesday to face off against their crosstown rival Brooklyn Nets. The Nets have also been struggling as of late, but they will be coming off a victory against the Sacramento Kings behind a stellar debut from newly acquired guard Seth Curry.