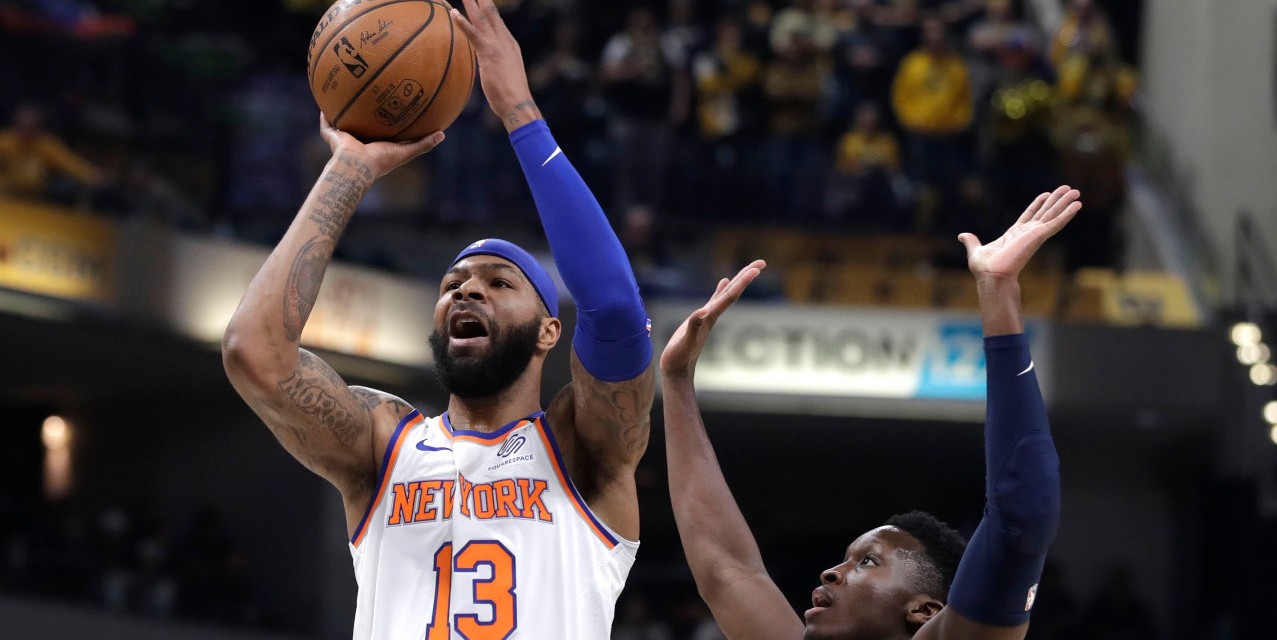 Ball movement, offensive motion, and a hot handed Marcus Morris were key to the shorthanded Knicks victory over the Pacers on the road.

Coming off an ugly home loss, the Knicks bounced back at Bankers Life Fieldhouse, defeating the Indiana Pacers 92-85. New York squandered a huge lead but kept their composure down the stretch and came out on top.

Idk what to do with my hands pic.twitter.com/Mw8405IPtS

The Knicks’ bench unit continued the beat down to begin the second quarter, pushing the lead to 17 points. The Pacers attacked the rim with Bobby Portis playing center, drawing three shooting fouls in the first two minutes of the second quarter.

Domantas Sabonis dropped 11 points in the second period, but Indiana wasn’t able to reduce New York’s lead by much. The ‘Bockers ended the second quarter with an 11-point lead, preventing Indiana from leading at any point in the first half.

The Pacers opened up the second half by making their first three-pointer of the game to cut the lead to six points less than three minutes in. Indiana’s offense finally started to find its groove, but Julius Randle helped keep the lead in New York’s favor with a flurry of buckets.

The Knicks began the fourth quarter up by just one point after getting outscored 32-22 in the third quarter. Just 30 seconds into the final period, the Pacers gained the lead off of a Turner three-pointer, but the Knicks defense regrouped and held Indiana scoreless for over two minutes.

Indiana tied the game at 80 points apiece with 6:06 left, prompting a New York timeout. Marcus Morris regained the lead for New York right out of the timeout. He hit two more jumpers to help extend the lead further, but also committed a dumb foul, smacking Sabonis on the arm from behind as he dunked with 36 seconds remaining. Sabonis hit the foul shot to cut the Knicks’ lead to three.

Morris redeemed himself on the next possession, hitting a 15-foot jumper to push the lead back to five, before making a pair of free throws to secure the win. Morris finished with 28 points on 10-of-21 shooting and six rebounds.

Julius Randle recorded a season-high in rebounds with 18 to go along with 16 points. Taj Gibson finished with 10 points and seven rebounds on 5-6 shooting.

As expected, Sabonis feasted. The first-time All-Star dropped 25 points and eight rebounds on 10-of-15 shooting. Malcolm Brogdon recorded a game-high 12 assists, as well as eight points and seven rebounds.

Dennis Smith Jr. was named tonight’s starting point guard with Frank Ntilkina (sore groin) and Elfrid Payton (suspension) unavailable. In Smith’s only prior start of this season, he recorded four points and three assists in 26 minutes against the Milwaukee Bucks.

Smith looked to get touches for others rather than shots for himself. He recorded three assists in the game’s first four minutes.

Smith still shot poorly, and did not record a field goal until the fourth quarter. In 27 minutes of action, Smith tallied six points and six assists on 2-of-9 shooting with two turnovers.

Two-way player Kadeem Allen served as the backup point guard. As soon as Allen entered the game, he drew a foul on Sabonis and hit a floater on the ensuing offensive possession. He later connected with Mitchell Robinson on an alley-oop from just inside halfcourt.

Allen closed the game out, holding his own on the defensive end. He finished with six points and two assists in 21 minutes.

The Knicks’ offense, which often resembles a computer crash, operated like a well-oiled machine tonight. The offense was constantly in motion, setting off-ball screens and utilizing the pick-and-roll well.

Consider the play below. Smith gives the ball to Gibson and sets a screen for Damyean Dotson. Gibson hands off the ball to Dotson while setting a screen, and Dotson drills the open triple.

Dot has been balling lately pic.twitter.com/xaU39fs9iy

Motions like these seemed more bountiful tonight than in previous games, where each Knick often takes a turn going 1-on-1 with their defender and kicking the ball back out if they can’t get the shot they want. The Knicks also looked for fast-break opportunities, which proved effective against the slower Pacers.

Admittedly, though, the rhythm was lacking when Julius Randle started to command the ball. Randle kept up his typical bully-balling, scoring 16 points on 5-of-14 shooting. Randle’s aggression helped put Sabonis in foul trouble. Sabonis recorded his third and fourth fouls of the game guarding Randle midway through the third quarter.

The ball movement ceased in crunch time, when Mike Miller put the ball in Marcus Morris’ hands and let him go to work. Morris recorded 12 points on 5-for-9 shooting in the fourth quarter.

The Knicks conclude their road trip Monday night against the Cleveland Cavaliers at 7:00 p.m. ET.