Knicks’ Home Opener Spoiled By Familiar Weakness Against the Pistons 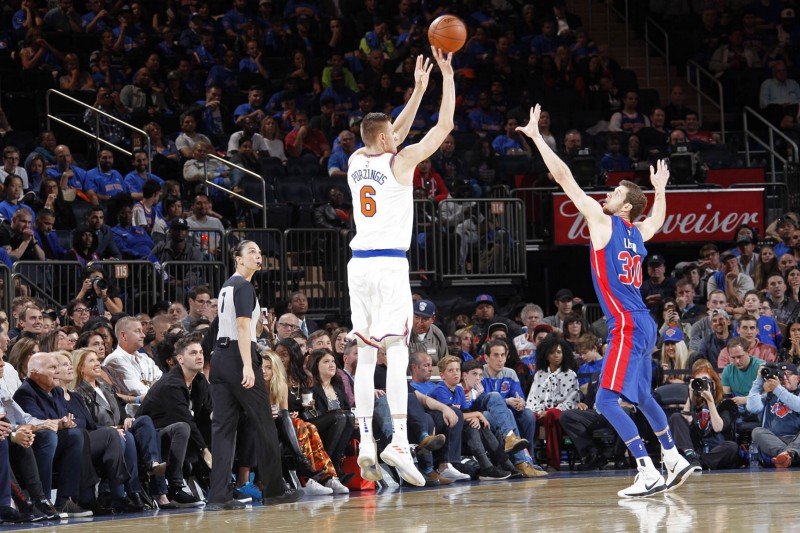 The Knicks were defeated by the Pistons on Saturday night by a score of 111–107.

On paper, when you look at this roster, you wonder where the additional offense will come from. Kristaps Porzingis will carry it all on his shoulders and he’s proven he’s ready for it. But winning can’t be done solely by one player, no matter how great he is. It takes his teammates doing the little things and executing the bigger plan while he goes to work.

Tonight, KP had the upper-hand as he found the smaller forward, Stanley Johnson, guarding him on defensive switches early. Whether this was intentional to preserve Tobias Harris for offense or just the nature of the game, KP made the Pistons pay over and over. While the game started out somewhat sloppy for both teams, KP had no problem getting the shots to fall in the mismatch:

KP can shoot over Stanley Johnson every time.

KP was on fire in the first half, scoring 23 of the team’s 64 points. The Knicks lead at the half, but we’ve seen this before. The Knicks start a game on level 10. Defensively, they’re in sync. They’re sealing off the perimeter. Guys are helping along the baseline and in the paint. They’re forcing turnovers and making shots on the other end. Then they come out in the third and it all falls apart.

Third quarters used to be where Melo would go on runs to keep the Knicks within striking distance. Without that pure scoring weapon, the team is left to rely on their opponents’ mistakes rather than having at least a secondary scorer to replace the deficit.

In the second half, the Knicks had no answer for Anthony Tolliver off the Pistons’ bench. He came in and added nine points, all from long distance. Ish Smith, who has found a place that suits his skill set as a guard who can split defenses, also contributed 10 points and three dimes of his own.

A lot of games will be like this because the Knicks are allergic to consistency. Hornacek is dealing with new players but the game plan hasn’t changed. And realistically when the Knicks are playing teams like Detroit, the execution isn’t sophisticated. These are the losses that Knicks fans have come to live with, but it doesn’t make it any less frustrating to see.