Knicks Hope for Revenge Against Nets in Sunday Matinee 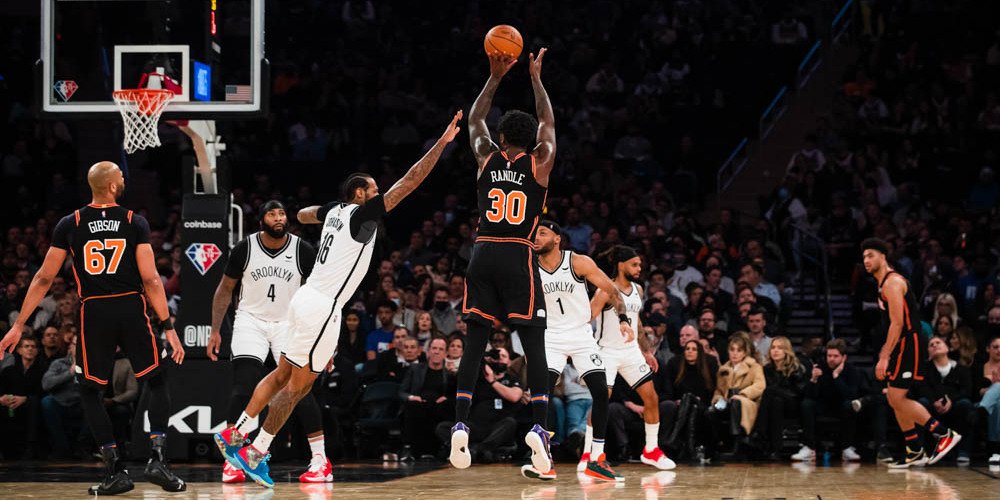 Seeing their winning streak snapped in Memphis, the Knicks are back in New York to rematch with the Nets, who have beat them twice by a combined seven points.

The last time the New York Knicks (28-39) faced the Brooklyn Nets (34-33) featured an epic collapse. Cam Thomas erupted for 16 points in the fourth quarter to cap off a second half in which the Nets outscored the Knicks 67-41 to erase a 21-point halftime deficit. The Knicks went ice-cold from deep in the second half, shooting 3-for-20 from three, while the Nets shot a much more efficient 7-for-15, led by Seth Curry’s four three-pointers.

The collapse hurt for more reasons than the obvious. There was no Kevin Durant, no Kyrie Irving. The Knicks should have won that game. Instead, they came apart, similar to Friday night’s fourth quarter in Memphis. The team shot 27.3% from the field while Ja Morant went super Saiyan and the result was another loss after having a double-digit lead.

On Sunday, Durant will be on the court Sunday and is coming off an impressive “don’t you know who the f–k I am” performance in Philadelphia. Durant and Irving made practice of the Sixers, showing how lethal the Nets are when they are locked in.

The midday matinee should hopefully bring the best out of Julius Randle, RJ Barrett, and of course, National Television Evan. It will take a group effort to take down Durant, who will never shy away at the chance to clown Knicks fans.

Here’s what to look out for ahead of the game.

Julius Randle has been on a mission to make Marc Berman look like a fool. Okay, maybe that’s not the reason, but the point is, Don Julio has returned to form.

Since the “Who reported it, Marc?” incident, Julius Randle is averaging:

Randle has been able to take a backseat of sorts to RJ Barrett while bringing the type of production he grew accustomed to last year. Friday night was another strong outing. Randle led the team with 36 points, pulled in 12 rebounds, dished six assists to go along with a pair of steals and blocks.

Had Barrett not been cold, the Knicks likely hold on. If the team is going to have any success against the top teams, this is the Randle they need. Stopping Durant will be part of a tough assignment, and if Obi Toppin is out yet again, foul trouble can be the deciding factor for Randle and by effect, the Knicks.

Mitch’s Chance to Make a Statement

Mitchell Robinson’s stellar play has kind of flown under the radar. Robinson has the third-best True Shooting percentage in the league at 72.9% and has developed quite a rapport with Barrett.

The reawakening of Robinson as a lob threat has helped Robinson make a compelling argument for the team to hammer out an extension. Health would have to be the only concern from the team, because, on the court, Robinson has only given reasons to open up the checkbook.

Robinson will be faced up against Andre Drummond and Nic Claxton, two solid players no doubt, but guys that should not hold Robinson down. Robinson has had a double-double in four of his last five games and has a chance to make his case for a new contract, if not to the Knicks then to the rest of the league.

Obi Toppin is the notable name with a chance to play. Toppin has missed time with a hamstring, missing the last five games.

Derrick Rose and Quentin Grimes remain out with their respective foot and knee injuries. Nerlens Noel will miss yet another game with a foot injury, which means more minutes for Jericho Sims, Taj Gibson, and perhaps a game where Randle plays the full way.

The Nets will of course be without Kyrie Irving, who can watch the game from the stands but remains banned from the floor until Eric Adams waives the private mandate vaccine mandate. Ben Simmons will also be out as he does whatever he is doing, and LaMarcus Aldridge will miss this one with a hip injury.