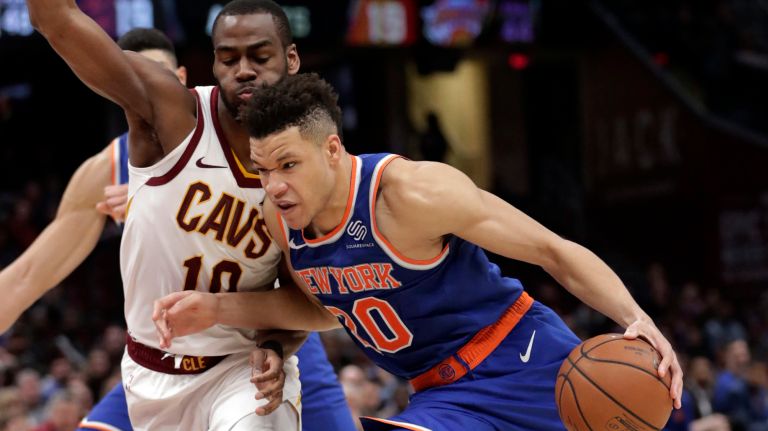 The New York Knicks travel to Cleveland to face Kevin Love and a struggling Cavaliers team.

Following a close 104-99 loss to the Toronto Raptors, the Knicks are back in action Monday night with a matchup against the Cleveland Cavaliers.

With the Knicks currently 10-45 on the season and the Cavaliers 11-45, the two bottom feeders of the East square off in a game with significant tanking implications on the quest for Zion Williamson.

If you’re sitting down and watching this game tonight, you’re a true, loyal, and die-hard Knicks fan. If your significant other ever questions your loyalty, just tell her what you’re watching tonight.

Let’s take a peek at what to expect in tonight’s contest.

The New York Giants will be one of the most intriguing parts of the game tonight, and I’m not talking about the football Giants. I’m talking about the big men in orange and blue—DeAndre Jordan and Mitchell Robinson.

In just four games together, the tandem is off to a hot start. In the last contest, Jordan posted a double-double with 10 points and 18 boards. Robinson put up a career-high 15 points while adding seven rebounds and three blocks, increasing his rookie-high and top-10 in the league average of 2.03 blocks per game. Jordan’s impact both on the court and in helping develop Robinson has been noticeable in such a short period of time. Expect Jordan to start tonight and Robinson to provide a spark off the bench. With Kevin Love just returning from injury and likely facing a minutes restriction, expect Jordan and Robinson to put on a show.

“Having @DeAndre around, he helps me out at practice, and I just translate that to the game.”

Tonight’s point guard matchup showcases two of the more exciting offensive-minded point guards in the league. After posting 25 and 31 points, Dennis Smith Jr. looks to bounce back from his worst game in a Knicks uniform, when he posted 13 points against Toronto while shooting a dismal 4-17 from the field.

Collin Sexton has had a solid rookie season in terms of scoring production, averaging 14.8 points per game and shooting just above 40 percent from the field. However, his contributions outside of scoring haven’t been as noticeable—Sexton is averaging just 3.1 rebounds and 2.8 assists per game. Expect Smith and Sexton to put on a scoring show tonight, trading baskets back and forth throughout the game.

DSJ looking good. In his first week as a Knick, @Dennis1SmithJr averaged 23 points, 6.7 assists and 1.7 steals per game, making him our @draftkings Player of the Week. pic.twitter.com/TU7JATWHjt

He’s back. After appearing in just the first four games of the season before being sidelined with a foot injury, Kevin Love returned to game action in Friday’s loss to Washington. Playing just six minutes, Love posted four points, one assist, and one rebound while shooting 1-5 from the field. Love rested the following game and is expected to be back in the lineup tonight, making his first home appearance since early in the season.

Record On the Line

The Knicks are on the brink of a record-breaking achievement, and as you might imagine, it’s not one to be proud of. With their loss to Toronto, the Knicks tied a franchise-worst 16th consecutive loss, matching a feat the 2015 Knicks accomplished. With a loss to Cleveland tonight, the Knicks would reach a franchise-record 17th straight loss in a single season.

Is it really a loss if it brings you one step closer to Zion? I don’t think so.