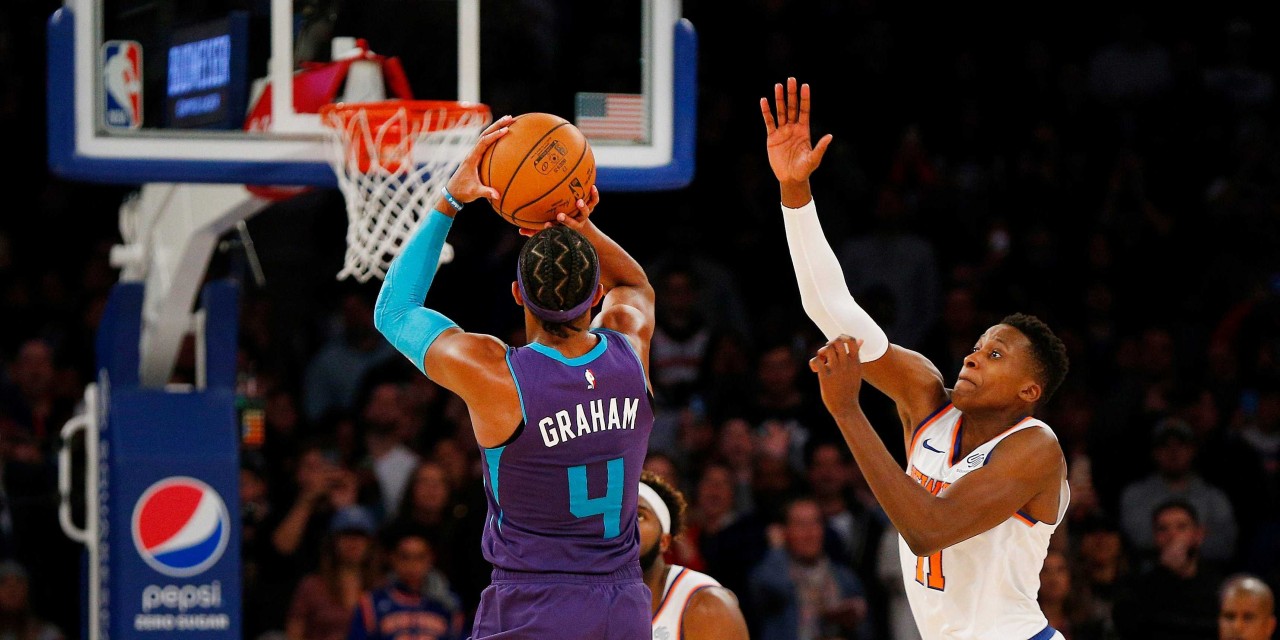 The tragic loss of Kobe Bryant is still very fresh of players and coaches’ minds, but the Knicks and Hornets have to play ball anyway.

Basketball just hasn’t been the same since the tragic passing of Kobe Bryant, his daughter Gianna, and seven others in a helicopter crash two days ago.

With heavy hearts, the New York Knicks (13-34) beat crosstown rival Brooklyn Nets on Sunday, but the final score didn’t matter. There was a slate of other games that day, as well as Monday, but all of that didn’t even come close to the weight the world felt after Bryant’s passing. Those games felt trivial.

48 hours isn’t nearly enough time to mourn an icon and the lives lost, but the Knicks will try to return to a degree of normalcy when they take the court against the Charlotte Hornets (15-31).

The Knicks lost their previous matchup against the Hornets back on November 16th, after Devonte’ Graham sank the game-winning shot to give Charlotte a 103-102 win.

While New York looks to win consecutive games for the first time since January 1st, Charlotte is looking to end an eight-game losing streak. The Hornets recently lost to the Milwaukee Bucks on Friday, as Giannis Antentokoumpo and Co. handed Charlotte its fifth loss by double figures amid this losing stretch.

With this being Charlotte’s first home game since Sunday’s tragedy, the Hornets will be giving their own salute and tribute to Bryant, who they famously had for two weeks before trading him away to Los Angeles.

Tip-off is scheduled for Tuesday night, at 7 p.m. ET.

Devonte’ Graham had one of his best games against the Knicks. Not only did he provide the late-game heroics to give Charlotte the win over New York in their previous meeting, but that was just the finishing touch to a strong 29-point performance.

Now that we’re halfway through the season, it’s clear that Graham’s hot start was no fluke. It’s looking more like a breakout year.

While Terry Rozier, the Hornets’ top offseason acquisition, still plays a big role, Graham has emerged as the top player on the Hornets’ team. Graham is currently Charlotte’s leading scorer and distributor. While he can be a volume scorer at times, his three-point stroke is dangerous when he’s able to get going, as the Knicks saw back in November. He’s been one of the top surprises around the league.

Rozier is right behind Graham, with 17.8 points and 4.4 assists per game. He remains a solid two-way guard. The Hornets mainly play through their guard tandem, but also keep an eye out for rookie forward P.J. Washington, who gave the Knicks fits last time with a 19-point outing (7-of-9 shooting).

With rumors surfacing last week regarding potential Knicks’ interest in trading for Malik Monk, they will get an up-close and personal look at the third-year guard.

Once a scoring machine at Kentucky and potential New York draft target coming out of college, the Knicks ultimately went with Frank Ntilikina in the 2017 NBA Draft.

Will the Knicks continue their trend of acquiring missed prospects years after their time in the NBA draft?

With R.J. Barrett still out, the Knicks will have to do it without their rookie swingman, who had a team-high 22 points in the previous loss to the Hornets. They’ll have to look elsewhere for production.

Big man Julius Randle is coming off back-to-back double-double performances. He played a big role in the win against the Nets, with a 22-point, 15-rebound performance. Before that, he had 20 points, 11 boards, and three blocks in a six-point loss to Toronto.

New York’s top scorer, Marcus Morris, is currently having one of his best months of the season, scoring-wise. So far, in the month of January, he’s averaging 22.1 points and shooting 48.0% overall—beating out his monthly averages this season.

Lastly, Sunday’s game feels a bit like an outlier, so maybe Damyean Dotson will be able to the recent form he showcased last week. Against the Nets, he only had four points and went 2-of-3.

In the three previous games before that, he was having his best stretch of the year, especially since he was finally getting consistent minutes for consecutive games. He averaged 16.6 points per game and shot a combined 18-of-31 (58.0%) overall during that three-game stretch.