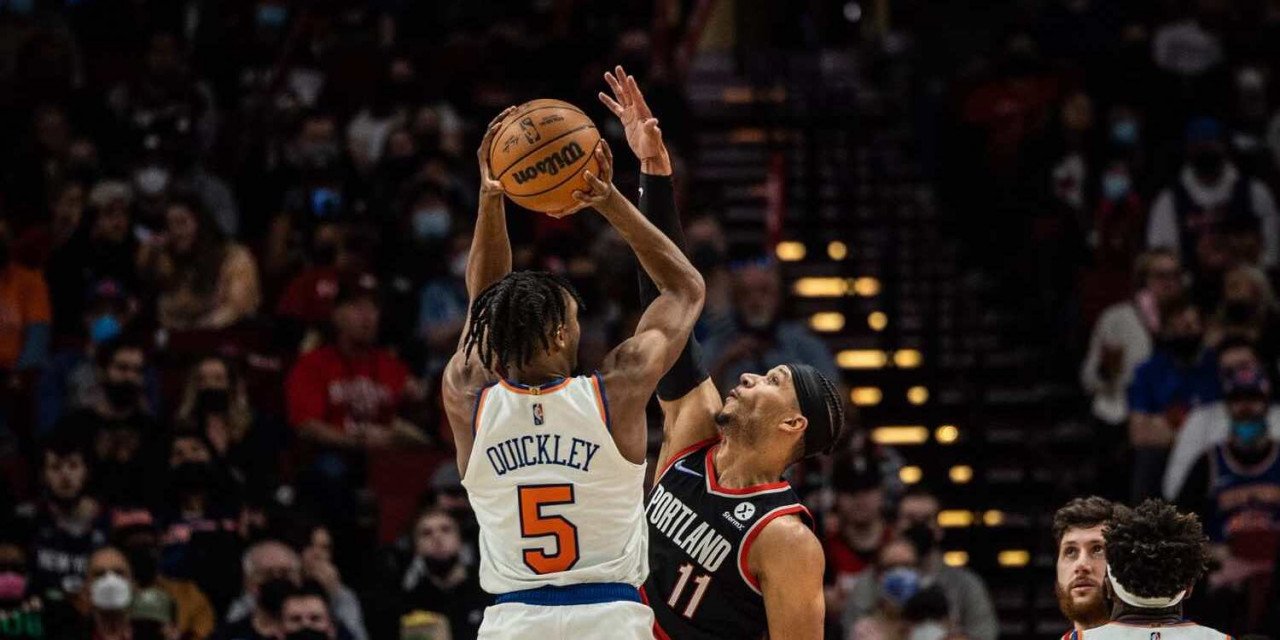 After two close losses to playoff contenders, the Knicks will face a team that is much more their speed: the Trail Blazers.

The New York Knicks (28-40) host the Portland Trail Blazers (26-41) in a matchup between two lottery teams. The last time these two teams faced each other, Portland erased a 23-point third-quarter deficit and New York had 11 points in the fourth quarter, giving up the lead and game to the Blazers 112-103. New York enters the game with three wins in their last 10 games.

The Knicks are, for a lack of better words, whatever. After a brief, three-game winning streak, New York lost to Memphis after a sizable lead in the third quarter and then lost a back-and-forth affair to the Brooklyn Nets with Kyrie Irving on the sidelines. Outside of the kids playing, this team continues to have the same issues with no escape in sight—the veterans are playing a pinch too much and Tom Thibodeau relies on them just enough to drive everyone crazy. At this stage, it is what it is.

And let’s talk about the kids, briefly. Jericho Sims is getting a bit more trust from Thibodeau and despite a perfect performance, Sims looked good on the glass and, as always, his athleticism stands out. Immanuel Quickley has to get back in rhythm after two down performances against Brooklyn and Memphis. Both feel like solid rotation players for next season’s team, but their offseasons are key. Quickley should get more reps playing point guard, while Sims is someone who needs more offensive moves outside of dunks. If they can both improve, they fit the mold of cheap rotation players who could play in a multitude of spots on the 2022–23 Knicks.

IQ with the nasty move 🔥🔥 pic.twitter.com/VZ64WS8jj2

On the other side, the Blazers are a mess? On one hand, the Blazers do have cap space for next summer to help build around Damian Lillard, two first-round draft picks, both projected to be in the lottery, and Anfernee Simons has come along from another young player to an established guard who could get a sizable deal in restricted free agency this summer. The question mark stands because all of their recent moves suggest they will move Lillard and start over, but if they go the other way, moving picks and assets to further extend the Lillard era, I’m not a fan.

With the Blazers dealing with injuries, they’re playing several unknown players. The likes of Drew Eubanks, Trendon Watford, and CJ Ellerby led Portland in their last game against the Atlanta Hawks—young players who would be fighting for roster spots, getting upward of 20 minutes per game. The hope is that someone pops; maybe Ellerby is a rotational wing, or Watford becomes a solid bench big. Maybe Keon Johnson, the asset from the Norman Powell trade, could emerge as a viable wing. Whatever happens, Portland is giving a few 21-year-olds shots to stick in the league, and there’s value in that.

What does that mean for the Knicks? It honestly should mean a blowout victory for New York. Julius Randle should be the best player on the floor when these two teams meet, RJ Barrett the second, but you never quite know what you’re going to get with the Knicks, which makes every game a bit of an adventure.