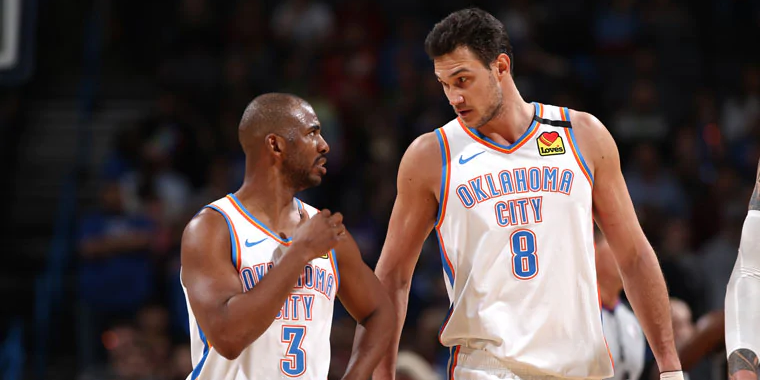 The Knicks try to correct course after a bad home loss to the Jazz as Chris Paul and the surprisingly fun Thunder come to town for a Friday tilt.

The New York Knicks (19-43) take on the Oklahoma City Thunder (38-24) on another potentially disappointing Friday Night Knicks showing at the Garden. OKC is favored -290 to beat the Knicks, per SBD’s odds.

New York has lost seven of their last 10, and the end of the season could not come soon enough. The Knicks and James Dolan’s complete mismanagement of the Spike Lee debacle unfolded in the public eye, leading to the team inexplicably sending out interim head coach Mike Miller to answer all media questions on the matter and releasing an absolutely ridiculous statement. Now, the most popular and beloved Knicks fan won’t be in his seat for the foreseeable future, and fans are being thrown out of the Garden for chanting “Sell The Team.” I’m not sure at what point Adam Silver decides to step in and use some of his powers for good, but now seems like a decent time.

There isn’t much sense to be made on the court, either. Young Knicks Allonzo Trier and Damyean Dotson have seen their minutes dwindle to zero. Dotson riding the bench is specifically painful, considering he’s one of the only true 3-and-D wings the team has, and fits the mold for the type of players who make sense around R.J. Barrett and Mitchell Robinson. Frank Ntilikina continues to play second fiddle to Elfrid Payton, who very likely won’t be on the team next season. Ntilikina has become one of the lone bright spots on the team, a player who can impact a game without the ball.

At least we have Frank pic.twitter.com/hJ8DrDv7Jm

The Thunder are one of the most interesting teams this NBA season. Paul has had an incredible run in Oklahoma City, answering a lot of his haters’ questions about how far his performance would drop off as he ages into his mid-30’s. He’s still the same player from before, handling the ball on a string, faking out defenders in the paint, and draining threes from deep.

The Thunder are a well constructed force, with a balance of scoring and defense at every position. Former Knick Danilo Gallinari has become a stretch four scoring beast, hitting 41.0% of his threes at 7.1 per game. Phenom Shai Gilgeous-Alexander has taken the leap from promising rookie to fringe-All-Star levels of play. Watching him play so well already is incredible, but with the added sting that he was drafted just two slots behind Kevin Knox. Knox was considered at the time to be the more desirable prospect out of Kentucky, but Shai’s evolution has proved that wrong.

There’s a reason to like newest Knick Maurice Harkless’ game, and there’s a chance he could return in a Knicks uniform next season. He can hit threes at a league-average rate, and doesn’t get lost on defense, something rare in New York. It wasn’t so long ago that Harkless was going to be the main piece of the original Carmelo Anthony trade, which would’ve sent ‘Melo to Portland in 2017.

The Knicks need more wings like Harkless, and moving into next season, Leon Rose and the refurbished Knicks management should monitor the New York native’s situation in free agency.

The Knicks and Thunder tip at 7:30 p.m. ET tonight from the Garden.