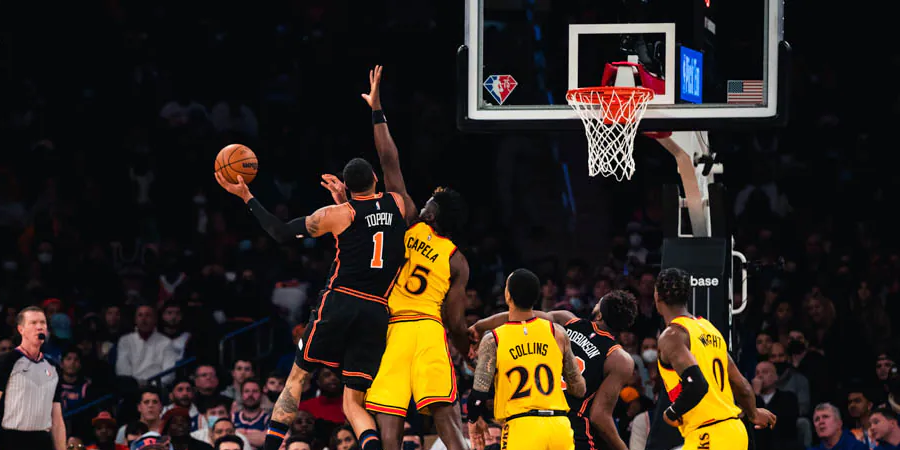 Julius Randle is out as the Knicks gear up to host Trae Young and the Hawks, possessing the final play-in spot in the Eastern Conference.

The Knicks will look to bounce back from a loss to Utah and complete the regular-season series sweep over Atlanta. The Hawks are trying to cling onto their play-in postseason spot, having won four of their last six games, but lost in their most recent outing against New Orleans on Sunday.

Tip-off is scheduled for 7:30 p.m. ET at Madison Square Garden on Tuesday night. The game will also be broadcast on TNT.

Ever since Fournier eclipsed the 200 threes mark this season in the 128-98 win over Portland on March 16th, he’s been letting it fly from long range and knocking them down at a solid rate.

He’s made 211 three-point shots this season and is just six long-range buckets away from tying John Starks’ franchise-record 217 threes, which he set in the 1994–95 season.

Fournier has made five threes in each of the last two games, shooting a combined 10-of-21 from downtown during this stretch. He’s gotten off to hot shooting starts in both games, and it looks like he wants that record as soon as possible.

At this rate, this Atlanta game would be his last chance to be able to tie or break the record at home, otherwise, it would likely happen in any of the Knicks’ three road games after Tuesday night.

While making six threes to tie, or seven to break the record, would be a stretch, it’s not completely out of the question. Fournier previously made six or more threes in a single game on six occasions this season, last doing so against Philadelphia on February 27th. He made a career-high 10 three-pointers against the Celtics on January 6th.

The play-in spot hopes are gradually fading away, but it isn’t time for Knicks players to sag off. The development and continued solid play of RJ Barrett are much appreciated, as he continues to be a bright spot for the Knicks in this half of the season.

He struggled in his first two games against the Hawks, scoring an O.K. 15 points and seven rebounds on November 27th, but then an even quieter nine points on 4-of-15 shooting in the Christmas Day rematch.

The Hawks did get a taste of the new-and-improved post–New Year’s Barrett, when he dropped 26 points to lead the Knicks in January, and Barrett has only continued to elevate his game since then.

He’s averaging 24.1 points per game this month, and his average for the season is steadily approaching 20.0 points per game, which would be a career-best. With Julius Randle out, Barrett will have to set the tone for New York.

Tightening up on Trae Young

The All-Star point guard has cooled down a bit since dropping 40 points in back-to-back games, but maybe he’ll be able to get back on track against the Knicks.

Young is coming off of an improved 21-point, 10-assist performance, which included a 5-of-14 shooting performance and seven turnovers. Before that, he was limited to just nine points in a loss to Charlotte.

Also keep an eye on Bogdan Bogdanovic, who’s been playing well recently. He’s provided a scoring punch off the bench, combining for 51 points and shooting for 7-of-15 from deep over the last two games.

On Tuesday morning, the Knicks announced Randle will not play against the Hawks due to a sore right quadriceps tendon. Feron Hunt, Nerlens Noel, Cam Reddish, Derrick Rose, and Luka Samanic remain out.