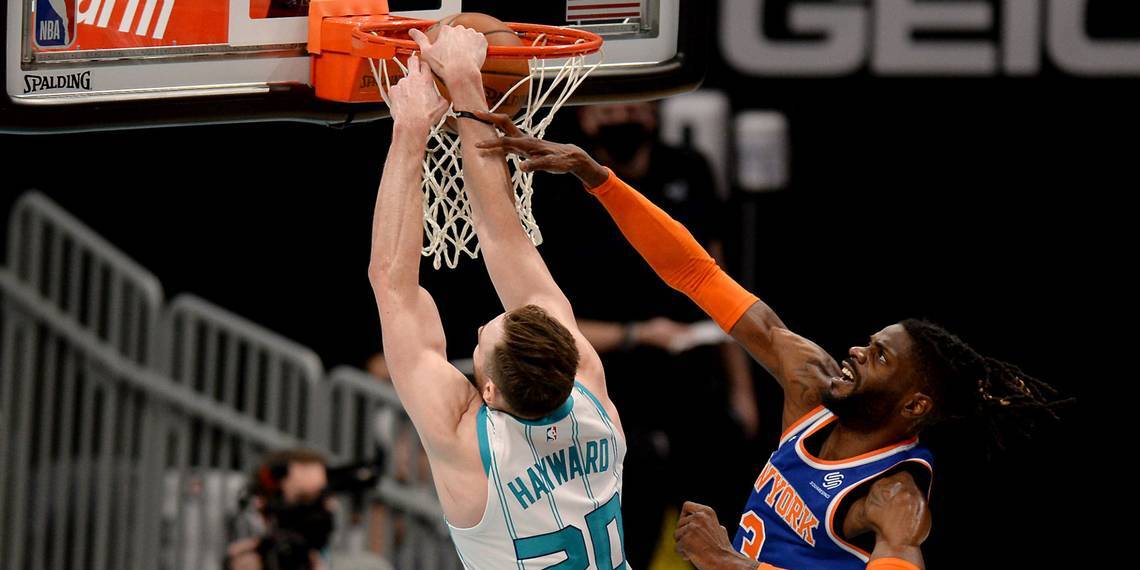 The Knicks are the hottest team in the NBA right now. Led by Julius Randle, they stay at home and try to build momentum against the Hornets.

The New York Knicks (31-27) have been on an absolute tear recently, rattling off six straight victories. New York aims for their seventh straight win against the Charlotte Hornets (28-28), who are not too far behind them in the Eastern Conference standings. Charlotte has lost four of its last five and are looking to tread water until rookie phenom LaMelo Ball, who recently resumed basketball activities, returns in about a week to 10 days, per ESPN’s Adrian Wojnarowski.

James Borrego’s squad has had a pretty solid year, considering the plethora of injuries and low expectations. Ball, Devonte’ Graham, Malik Monk, and Gordon Hayward have all missed chunks of time this year due to injuries, but still, the Hornets find themselves in the thick of a playoff race. For this evening, Monk (ankle) and Graham (quad) are questionable to play, while Hayward remains out.

A lot of credit for the Hornets’ success this season should be given to Terry Rozier, who has emerged as a legitimate starting point guard in this league, averaging a career-high 20.7 points per game, per ESPN Stats. Rozier is coming off a 34-point performance against the Blazers and will be looking to replicate that performance tonight at the Mecca. Alongside Rozier, Miles Bridges and P.J. Washington have been solid this season, providing some toughness and excitement to a very feisty Hornets squad. Bridges has broken the Internet on a few occasions this season with his highlight-reel dunks and insane athleticism.

Charlotte is a dangerous team with legitimate offensive firepower. This team gave the Knicks fits back on January 11th in a 109-88 Hornets victory. Julius Randle and R.J. Barrett both had rough outings, shooting a combined 7-for-27. Look for the Knicks’ stars to bounce back this evening.

After taking home the Eastern Conference Player of the Week honor, Julius Randle looks to continue his MVP-like play. Four straight 30-point performances have propelled Randle into the lead in the Most Improved Player discussion, as well as some rumblings in the MVP discussion.

Charlotte is in the middle of the pack defensively in terms of points allowed but did a great job containing Randle in the aforementioned matchup a few months back, as he scored only 11 points in one of his worst offensive outings of the season. With this game meaning so much more, due to playoff implications and the fact that Randle is on a mission right now, expect the former Kentucky Wildcat to come out of the gates firing and continue to lead the Knicks.

Leading the @nyknicks to a 4-0 record in Week 17, Julius Randle (@J30_RANDLE) was named Eastern Conference Player of the Week! #BestOfNBA

A significant, yet underrated aspect of the Knicks’ recent success has been the play of their big men, Nerlens Noel and Taj Gibson. Noel and Gibson’s impact has not necessarily been reflected in the box score recently, but if you watch the games, they have had a big-time effect on winning ways. Nerlens Noel, after bouncing around the league his first few seasons, has established himself as a great fit on this team, especially with Mitchell Robinson sidelined.

In Noel’s last contest against the Pelicans, he did an excellent job of boxing out, securing key boards, and even met Brandon Ingram at the rim with a ferocious block. Gibson did an excellent job as well, using his strength and veteran savvy to make life for Zion Williamson difficult.

Both Gibson and Noel will play a key role in tonight’s game, as they have to deal with the more athletic frontcourt talent that Charlotte boasts. The bigs will look to set the tone, like they have been so good at recently, and hopefully, they can avoid being on a Miles Bridges poster.