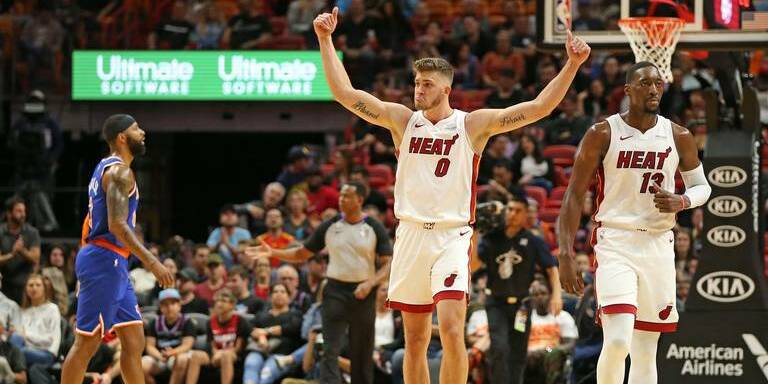 On a five-game losing streak, can the shorthanded New York Knicks stand the Heat at Madison Square Garden?

The New York Knicks (10-29) host the scorching hot Miami Heat (27-11) this afternoon in Madison Square Garden. The last time these two teams played the Heat got the better of the Knicks, winning 129-114 in South Beach.

The Miami Heat remain one of the league’s surprise teams as they vastly outperform expectations coming into this season. They have contributions from undrafted rookies Kendrick Nunn, who played in the G League last year, and sharpshooting forward Duncan Robinson. Butler has proven he can lead a team, and center Bam Adebayo took the next step in his progression to All-Star-caliber play.

It appears the Heat have all hands on deck and are healthy heading into this game. For the Knicks, not so much.

For tomorrow: Julius Randle is probable. He has missed last two games following a death in the family. Marcus Morris is questionable with a neck strain.

The Knicks are dealing with a plethora of injuries, but that’s no excuse. Last night the extremely shorthanded Lakers manhandled one of the hottest teams in the league (Oklahoma City) without LeBron James, Anthony Davis, or Danny Green.

The Knicks’ last win was on New Year’s Day against the Portland Trail Blazers. Now on a five-game skid, most games haven’t been that competitive. Kevin Knox through this stretch is playing some of the worst basketball of his career, for example. Randle has been out after a nice start to the Mike Miller era, and Robinson still isn’t starting.

Needless to say, to start this new year there have not been many positives for Knicks fans. It might be wise for the Knicks to let Knox get his flow back by assigning him to the G League affiliate Westchester Knicks.

But with that said, here are some ways the Knicks can pick up a win today and get back on a positive track against a tough opponent.

The Knicks may be without Randle and Morris again—their two leading scorers. On a team like New York, the scoring output simply won’t be matched by a single player. Recently we have seen Frank Ntilikina have a few nice scoring games, standout rookie R.J. Barrett has remained aggressive, and some journeymen like Bullock, Bobby Portis, and Taj Gibson have contributed much-needed scoring. If Ntilikina and Bullock end up not playing today, scoring will be that much harder.

Let’s hope that Julius Randle and Marcus Morris are able to play.

Recently Knicks fans have become extremely frustrated with Knox’s poor play on the court, and his body language. His shot is struggling, his minutes are down, and he’s in the midst of a sophomore slump, but he hasn’t provided anything else on the other end: neither rebounding nor making plays for teammates.

In a game like today’s where half the roster is probable or questionable, Knox is by default thrust into a starting role playing starting minutes. This could be a positive for him to get his mind right and play himself back into form, or it could go the complete opposite direction, as the Miami Heat have one of the league’s best defenses.

As mentioned earlier, it would not hurt the Knicks, nor Knox, to spend some time in Westchester this second half of the season. He wasn’t picked ninth by accident; the potential is there and he’s only 20 years old.

What Knicks Fans Should Like to See, Win or Lose

The Knicks are shorthanded against a very good team, so a win is probably not in the cards. But with young rebuilding teams, you have to find little wins in the losses. Here’s a few Knicks fans should be looking for:

Even if New York loses today, seeing those little things throughout the game would be encouraging.

After today’s game the Knicks travel to Milwaukee to take on the league-best Bucks and the reigning MVP. Let’s hope to catch a good team sleeping this afternoon.

Julius Randle returns on Sunday after missing the past two games; however, Marcus Morris, Dennis Smith Jr., and now Frank Ntilikina are all out against the Heat.