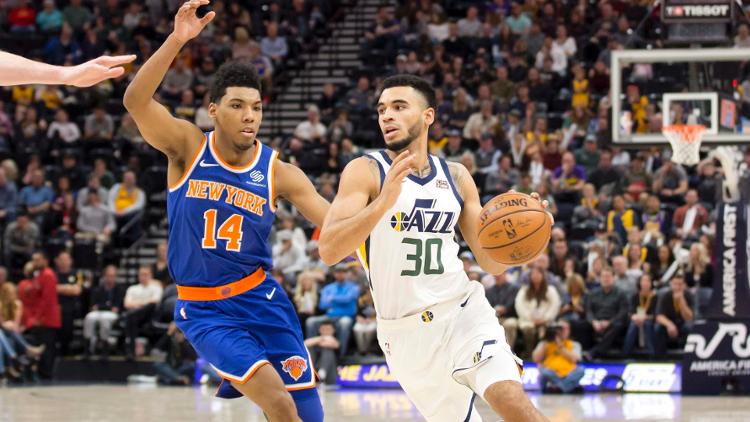 The New York Knicks kick off a six-game home stand, looking to avoid a season series sweep at hands of Donovan Mitchell and the Utah Jazz.

Ever since their fluky two-game winning “streak” in late February, the Knicks (14-57) have returned to form, losing nine of 10 games with their sights set on the upcoming draft lottery. Tonight, they welcome in the Utah Jazz (41-29) to the Garden. The Jazz are currently slotted as the seventh seed in the competitive Western Conference.

Utah is led by second-year stud shooting guard and native New Yorker Donovan Mitchell, who is averaging 23.5 points per game and has been the straw that stirs the drink in Salt Lake City. Mitchell is a supremely gifted and athletic scorer, and has demonstrated the ability to knock down threes at a decent rate. With his friends and family in attendance, the 22-year-old has the capability to erupt and torch the Knicks tonight.

Mitchell’s running mate, Rudy Gobert, has had an excellent season down low, averaging 15.4 points, 13 rebounds, and 2.3 blocks, per NBA Stats. Gobert is one of the most intimidating defensive players we have in today’s game, using his gigantic 7’9″ wingspan to swat and alter shots. In Utah’s previous matchup against the Knicks on December 29th, (a 129-97 Jazz blowout victory) the Frenchman put up 25 points and 16 rebounds.

A staple of Quin Snyder’s Jazz team this year is its incredible defensive prowess. Utah ranks fifth in the NBA in points allowed per game (106.2) and has three players in the top 10 in Defensive Win Shares, per NBA Stats: Joe Ingles, Mitchell, and Gobert. Additionally, role player Royce O’Neale is one of the more underrated perimeter defenders in basketball, and Jae Crowder is no slouch on that end either. Utah’s defensive ability combined with the Knicks’ offensive ineptitude could spell disaster tonight.

With Dennis Smith, Jr. sidelined due to a back injury and Frank Ntilikina questionable with a groin injury, the Knicks’ depth at the one is currently very thin. If we see Frank back tonight, it will likely be in a limited role, which means the Emmanuel Mudiay show will be on display for yet another night.

Mudiay has been in the Knicks fans’ dog house all season due to his poor decision making and inconsistencies. Mudiay seemingly doesn’t factor into the Knicks’ future plans but seems to be the most viable option at this point considering recent injuries.

In order for the Knicks to be competitive this evening, they must get production from Mudiay. In the most recent Knicks win, a 124-123 victory over the Lakers, the 23-year-old was money, posting 28 points and dishing out eight assists. Mudiay will be likely asked to shoulder a lot of the offensive load tonight, which will be challenging against the Jazz’s excellent perimeter defense.

Tonight’s matchup of big men will be one of the more interesting aspects of the game, with two of the premier shot blockers going at it in MSG. Rudy Gobert is a bona fide defensive star who disrupts opposing offenses with his length. Mitchell Robinson will have his hands full trying to guard and score against Gobert; these type of challenges will be learning experiences as Robinson looks to develop into a Gobert-esque player.

In a previous matchup against Myles Turner, another elite shot blocker, Robinson complemented Turner, but made it clear he wasn’t going to back down, and enjoyed the challenge of going at one of the game’s best. Robinson logged seven points and three blocks in a decent 13-minute showing. Expect Robinson to embrace the showdown with Gobert this evening and get more opportunities to compete than he did against Turner and the Pacers.