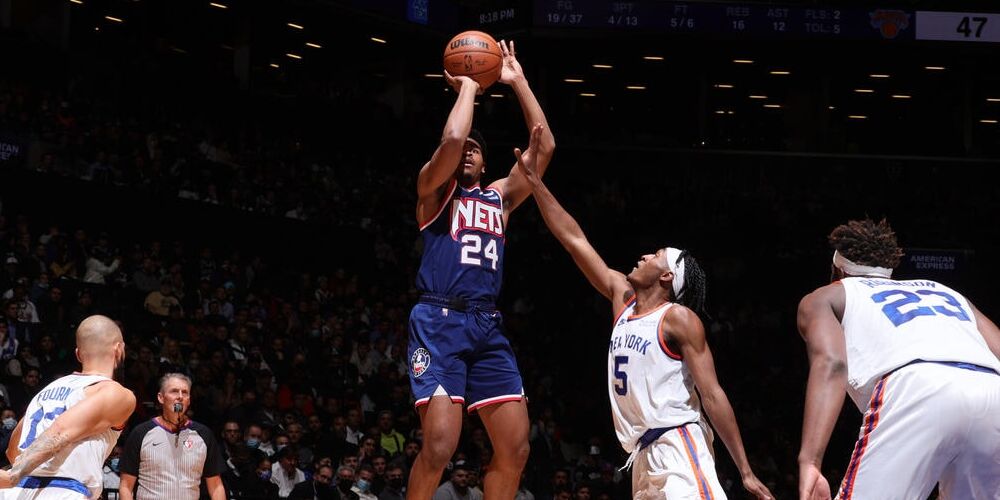 The Knicks will take on the Nets for the first time since November. New York will see a different Brooklyn team this time around.

When the New York Knicks (25-32) and Brooklyn Nets (30-27) met earlier in the season, there was still plenty of promise and still plenty of basketball ahead for both squads. Now, nearly three months since their November 30th meeting, there’s just dread surrounding New York City basketball.

It’s not all doom and gloom though. Nets fans can at least get excited over their blockbuster trade that involved James Harden and Ben Simmons, as they try to cling onto a play-in postseason spot. Brooklyn broke an 11-game losing streak with a comfortable 109-85 win over Sacramento on Monday night.

The Knicks have been embarrassing and Tom Thibodeau has been inexcusable. pic.twitter.com/UZPtHtwHvX

As for the Knicks, they’ll look to regroup after another stinging loss. On Tuesday night, they let one slip away in overtime against the Oklahoma City Thunder, marking their 12th loss in the last 15 games to sink further below .500.

The Knicks are searching for their first win over the Nets since January 26th, 2020. Since then, they have lost all four meetings by seven or fewer points, including a 112-110 loss at the Barclays Center earlier this season.

The crosstown foes will meet on Wednesday night at 7:30 p.m. ET. If you can’t make it to Madison Square Garden, the game will be on ESPN and YES.

Brooklyn’s newest trade acquisitions are already making an impact. Although Ben Simmons’ first game with his new team is still to be determined, the other trade pieces from the trade deadline earthquake—Seth Curry and Andre Drummond—helped break the Nets’ 11-game slump in their Brooklyn debuts.

Curry tallied a team-high 23 points, with seven boards and five assists in the win over Sacramento. Drummond chipped in 11 points, nine rebounds, four assists, and a pair of steals.

They’ll try to help hold things down, as the Nets deal with various absences. Kevin Durant, who had 27 points and nine assists against the Knicks on November 30th, remains out with a knee injury. Also, since the game is in New York, Kyrie Irving is ineligible to play.

Until Simmons plays, it’ll also be up to the other Philly transplants and role players like LaMarcus Aldridge, Cam Thomas, and Bruce Brown to carry the load for Brooklyn.

Aldridge is a bit streaky but the 36-year-old vet is still dangerous when he gets going. He had 19 points and eight boards on 8-of-11 shooting in 19 minutes against the Kings. Thomas, a rookie out of LSU, has shown that he can be trusted with big minutes off the bench and has been gradually carving out a bigger role for himself as the season unwinds. He can score at all three levels of the floor. Thomas has eclipsed the 20-point mark in four of his last six games.

As for Brown, he’s coming off of his best all-around performance of the season. The 6-foot-4 wing had a season-high 19 points on 8-of-12 shooting, with six boards, six assists, three blocks, five steals, and no turnovers. That could be a building block for him moving forward.

A couple steps forward, many steps back

There were some bumps to reach this point this season, but it might be safe to stay Julius Randle is back. Just before RJ Barrett sustained his recent ankle injury, Randle started turning up his play on the court. While Barrett has missed the last couple of games to nurse his injury, Randle continues to elevate and lead the way.

Randle had a triple-double with 30 points, 13 boards, and 10 assists, his first of the year to top off his best seven-game stretch of the season. Over the last seven games, he’s averaging 27.3 points, 12.7 boards, and 6.7 assists.

Evan Fournier also enjoyed a nice bounce-back game after a dud against the Portland Trail Blazers on Saturday, surpassing the 20-point mark for the third time in the last four games. Rookie Quentin Grimes has also been a bright spot as of late. After a rocky transition to the starting role during Barrett’s absence, Grimes is relishing in bigger minutes over the last couple of games.

While these three try to continue their promising play, it clearly hasn’t all been great for the Knicks.

The recent loss to Oklahoma City was the latest entry in winnable games that got away. The Thunder came in with an even worse record and overall season. It’s great that a couple of Knicks are playing better individually, but there were plenty of team-wide issues from the personnel on the floor, defense, and coaching decisions.

Credit Thunder rookies Josh Giddey and Tre Mann for putting up impressive performances to help the Thunder gut it out over New York. But on the other hand, the Knicks should not be allowing the opposing team—especially one as bad as OKC—to shoot 50% overall and knock down 13 three-pointers and shoot at a 38.2% clip from beyond the arc.

Despite their massive struggles this season, the Knicks’ defense had usually been an area to fall back on even when individual players or the team might be slumping. New York is still one of the better-performing teams on defense in the league, statistically. This Brooklyn game should be an opportunity to get back on course.

The Knicks Wall’s exclusive partnership with PrizePicks presents the picks of the night. Tonight, we’re going with Nets guard Patty Mills, as Brooklyn is without Kevin Durant, Kyrie Irving, and newly acquired Ben Simmons. We’re choosing “over” on Mills’ projected 19.0 combined points, rebounds, and assists. As for the Knicks, we’re sticking with Julius Randle, going “over” on his projected 41.5 combined points, rebounds, and assists.