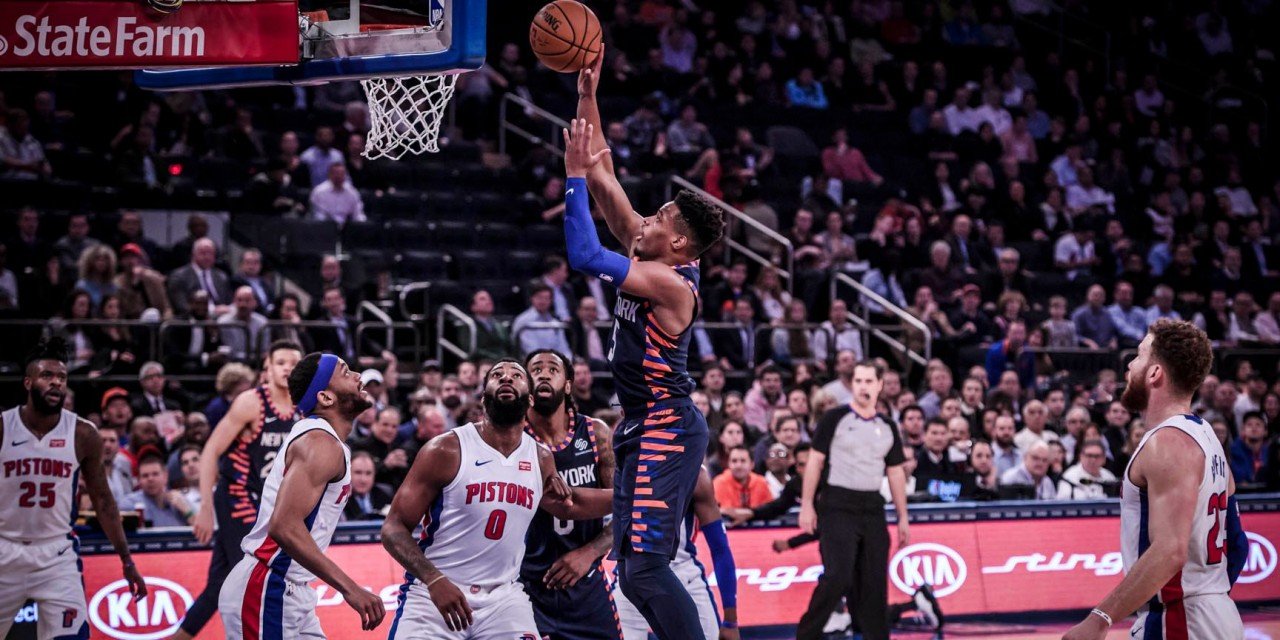 In their final game of the season, the league-worst New York Knicks host a Detroit Pistons team attempting to claw its way into the playoffs.

A long and tumultuous season comes to a close this evening for the New York Knicks, capped off with a home showdown against the Detroit Pistons (40-41). Whether the Knicks finish 18-64 or 17-65 doesn’t really matter—they have locked up the league’s worst record, and have a 14% chance of securing the first overall selection in the upcoming draft.

Despite the fact that this game has zero immediate impact on the Knicks, there is a lot at stake for their opponent. The Pistons are clinging for dear life to the eighth seed in the Eastern Conference. Fortunately for Detroit, they control their own destiny, and a victory over the putrid Knicks tonight will secure their spot. However, if the Pistons stumble, the Charlotte Hornets could overtake them for the final playoff spot in the East with a win versus the Magic.

Given the motivation for New York to play the role of spoiler tonight, a lot of eyes will be on this game to see who will come out on top.

The Pistons have struggled mightily down the stretch this season, losing four of their last five games and seem to be doing everything they can to choke away their playoff spot. Despite their recent woes, Detroit has dominated the Knicks this season, winning all three previous matchups, and have averaged 113.3 points per game against New York, per ESPN Stats.

Detroit boasts an All-Star caliber frontcourt in Andre Drummond and Blake Griffin, who have carried the Pistons into postseason contention.

Drummond, who is a man amongst boys down low, has killed the Knicks, averaging 17.3 points and nearly 17 rebounds per game, per ESPN Stats. Drummond could spell disaster for the young Knicks big men who have had trouble containing him in the past.

Griffin, who is questionable this evening, has had his fair share of success against the Knicks over the years, throwing down many poster dunks in his time with the Clippers. BG is averaging 28.3 points per game against the Knicks this year, well above his season average.

The Pistons under head coach Dwane Casey have had a very up-and-down year, looking tremendous on some nights and hapless on others. Tonight, a hungry Detroit team comes to town looking to reach the postseason for the first time since the 2015–16 season.

The Knicks have endured a rash of injuries down the stretch and have shut some guys down for the final game—making tonight’s bench a short one. Dennis Smith Jr. has battled the injury bug, and fortunately he will be back in action once again tonight against a Pistons team he dropped 31 on a few months prior. Smith is averaging 25.3 points per game against the Pistons this season, and is the only bona fide offensive weapon at the Knicks’ disposal tonight.

For some strange reason, Mario Hezonja decided to wait until garbage time games to decide to play well. Hezonja put up a triple double and looks like a new player since being given the lead guard role due to injuries and a shakeup by Coach Fizdale.

After being drafted fifth overall in 2015, Hezonja has been a disappointment both in his time in Orlando and this season with the Knicks. The Croatian’s recent performances have made Knicks brass at least consider bringing him back next season, after it looked like he was a goner a few weeks ago.

Hezonja will be highly motivated to put up another good performance tonight, leaving a lasting positive image when the Knicks’ front office evaluates the season.

Most Knicks fans will be asking one important, optimistic question: will this be the final game for the foreseeable future without Zion, KD, and Kyrie?

One can only hope.