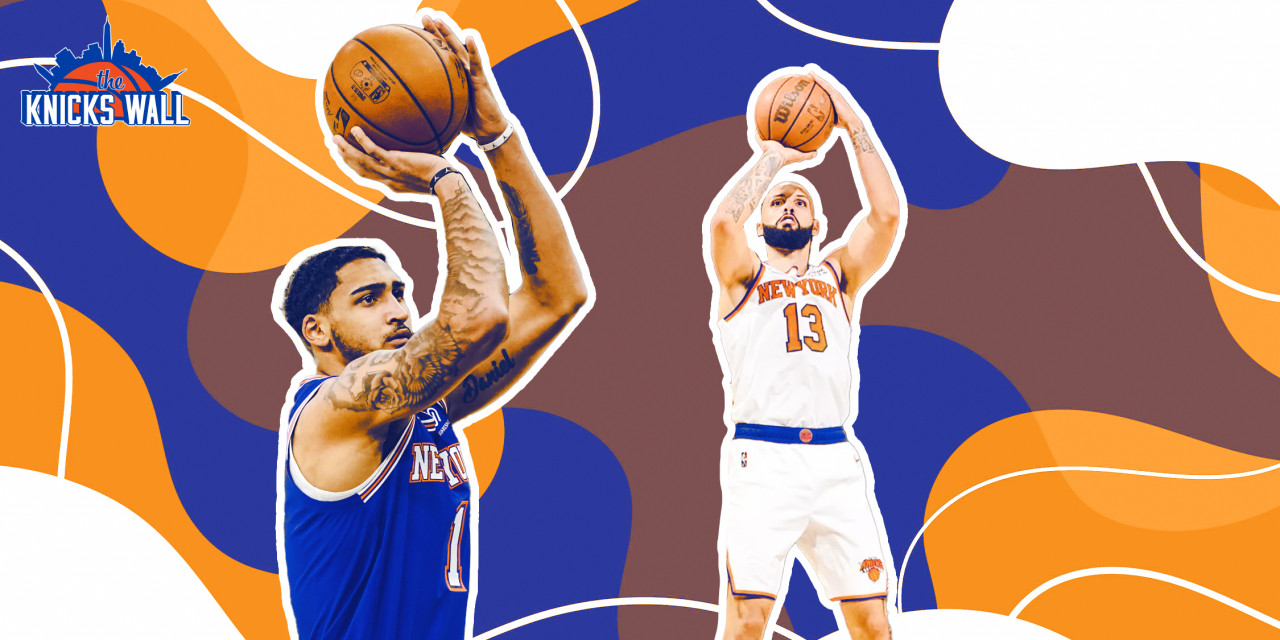 New York’s offense has been reshaped by the advent of the three-point shot. The Knicks have leaned into volume jump shooting to get their buckets.


When Derrick Rose suggested that the 2021–22 New York Knicks take somewhere between 37 and 40 three-point attempts per game in the offseason, my first thought went to the historic 1988–89 Knicks, a cult classic team known as the Bomb Squad. A team with Rick Pitino as the head coach and Patrick Ewing as the centerpiece, the Knicks built a young and electric team that launched a ton of threes. In total, New York launched 1,147 threes, 400 more than the next team. Though the success was fleeting, that team was largely the future of basketball, even if it took another 25 years to get there.

Fast forward to the 2021–22 season and the Knicks want to emulate the same thing. Last year’s Julius Randle-led offense was good, but not good enough; they were 22nd in the NBA in offensive efficiency but lacked any punches when Randle was off and ultimately was exposed when it mattered against the Atlanta Hawks last June. RJ Barrett wasn’t ready for the moment, the Derrick Rose gas tank hit E, and the supporting cast couldn’t get it done when the lights got bright. New York needed more.

That five-game series loss forced a change in the Knicks roster. Originally built around grit and positive defensive tendencies with players like Elfrid Payton and Reggie Bullock, head coach Tom Thibodeau and team president Leon Rose loosened the reigns to the roster and added some offensive-minded players, bringing in Kemba Walker and Evan Fournier, both from Boston, while retaining Alec Burks and Derrick Rose, plus showing trust in Julius Randle with a contract extension worthy of a budding star.

The Knicks have the best of both worlds—an updated and modernized offense within the shell of a Thibodeau team. A team that can shoot you out of the gym while remaining a group of kids who Thibodeau had to force out of the gym last season.

In New York’s first three games of the regular season, New York has eclipsed the 40 threes mark in each game. Currently first in the league with 49.0 threes per game and first in percentage of their field goals being threes at 50.2%. Again, three games aren’t enough to call it a trend, but it seems like the Knicks, a team that improved their roster with more shooters and an offensive curveball outside of Randle, have found some success in launching the ball from the outside.

Not only has the Knicks undefeated at the moment but perhaps the expectations of a middle-of-the-pack eastern conference team were maybe a bit light.

It still starts with Randle

Even with all the upgrades on the roster, the Knicks still operate with Randle as their talisman. With Randle at the top, it allows the offense to continue to flow. Averaging 28.9 points per game to start the year, Randle hasn’t shot the ball well at 29.2% but continues to launch them (8.0 attempts per game), offering a sizable amount of spacing and gravity. Throw in his ability to create at 6.3 assists per game and the combination of gravity and creation allows his teammates to find easier shots than normal.

Sometimes, it’s as simple as being in the paint and waiting just long enough to launch a pass to an open shooter. Here, Randle gets inside, gets three Celtics around, and gets into the air before passing it off to Barrett for an easy three. After an All-Star season that saw him improve as a three-point shooter and mid-range shooter, Boston crashed down on him in the paint, but Randle’s vision allowed him to find Barrett for an easy finish.

With Randle at the top of the offensive food chain, it allows other players to flourish. Rose’s ability to play even on all three levels (the three, the mid-range, and the paint) allows him to work off Randle well. Meanwhile, Walker’s shiftiness has been apparent in spurts so far in his Knicks tenure, and much like his days in Boston, he should be able to work and operate well without having to be the no. 1 option.

Signed as an upgrade over Bullock, many doubted Fournier after being much of an afterthought in Orlando, and his trade to Boston was mired by a positive COVID-19 diagnosis. Signing him to a four-year, $78 million contract was seen as a slight overpay by the Knicks. However, it seems like the Knicks got the proper player matched with Randle to help their offense.

In Orlando, Fournier played with an offensive hub like Randle in center Nikola Vuecvic but never had proper point guard play and didn’t have ideal offensive players around him. The team was largely built around the idea of defense first with coaches like Frank Vogel and Steve Clifford at the helm. In return, Fournier was operating and generating offense for himself. In New York, Fournier gets to lean back and get some more of his offense created for him, while also being a dangerous safety valve for their offense.

The biggest difference between Bullock and Fournier is their movement and ball-handling. Bullock, who tethered well with Randle last season, was a classic “3-and-D” player, capable of hitting big outside shots when created and defending other team’s best wing player. However, as the floor got smaller in the playoffs and teams didn’t give him that proper space, Bullock’s limitations were exposed.

Fournier is not on Bullock’s level as a defender, leaving third-year wing Barrett to assume the mantle of the lead defender. However, Fournier makes up for it in spurts offensively. Sporting an assist rate at 14.8% and assists per 36 minutes average of 3.4 for his career, Fournier is the exact player needed to take pressure off of Randle and Barrett as we move forward into the tougher stages of the schedule.

The adage “you live by the three, you die by the three” was on display on Sunday as New York fell to the Orlando Magic 110-104 to fall to 2-1 on the season. The Knicks went 13-of-48 from the outside and rested on their laurels after building a double-digit lead and the Magic attacked from there. The once-positive outside shot failed to fall for the Knicks and Orlando got back into the game and stole one from there.

However, the Knicks are embarking on a period of success, led by Thibodeau’s defensive system and an improved three-point shot—fully modernized basketball. It may take a bit more time to solidify, but the Knicks are running and launching threes at a rate not seen since the 2012–13 team when the likes of Carmelo Anthony, J.R. Smith, Jason Kidd, Iman Shumpert, and the likes won 53 games and earned the second seed in the Eastern Conference.

But the 2021–22 Knicks have upgraded with several shooters on the roster in Evan Fournier, Kemba Walker, Julius Randle, Derrick Rose, Alec Burks, R.J. Barrett, and Immanuel Quickley and they have the green light, making for one of the more exciting seasons in franchise history and with a bit of luck, one of the more successful ones as well.