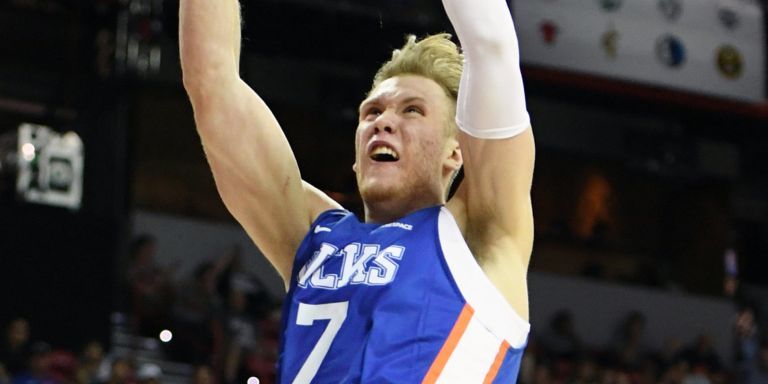 The New York Knicks have signed their 2019 second-round pick Ignas Brazdeikis to a three-year contract set at the rookie minimum, per the New York Post.

Brazdeikis, selected with the 47th overall pick in June, was drafted by the Sacramento Kings and agreed in principle to a trade to the Knicks in exchange for New York’s second-round pick, the 55th overall one, and $1 million.

The Lithuanian-born Brazdeikis, 20, grew up in Canada and played with the youth team alongside Knicks first-round choice R.J. Barrett. The 6-foot-7 forward nicknamed Iggy played one season at the University of Michigan, where he won Big Ten’s Rookie of the Year award for the 2018–19 NCAA season.

Brazdeikis is currently competing on New York’s Summer League team in Las Vegas, Nevada. He scored 30 points in the team’s Sunday night loss to the Phoenix Suns, shooting 11-of-19 from the floor, chipping in two assists, and coughing up the ball five times.

The Knicks last week announced that they signed their 19-year-old first-round selection Barrett.

Brazdeikis will earn the rookie minimum in 2019–20 (worth $900,000) and $1.5 million the next year. The Knicks possess a team option on Iggy’s partially guaranteed third year. Should New York exercise its option prior to the 2021–22 season, Brazdeikis would earn $2.4 million.

The second-round selection will fight for minutes at the forward position for the Knicks this year along with rising sophomore Kevin Knox, third-year swingman Damyean Dotson, and recent free-agent signings in Reggie Bullock, Taj Gibson, and Julius Randle. Brazdeikis is a tweener and excellent cutter and can play the power forward role for the Knicks when head coach David Fizdale decides to play small-ball.

»READ: Knicks Summer League what to watch for in Vegas

»READ: It could be worse: the Knicks might be onto something with these two-year deals