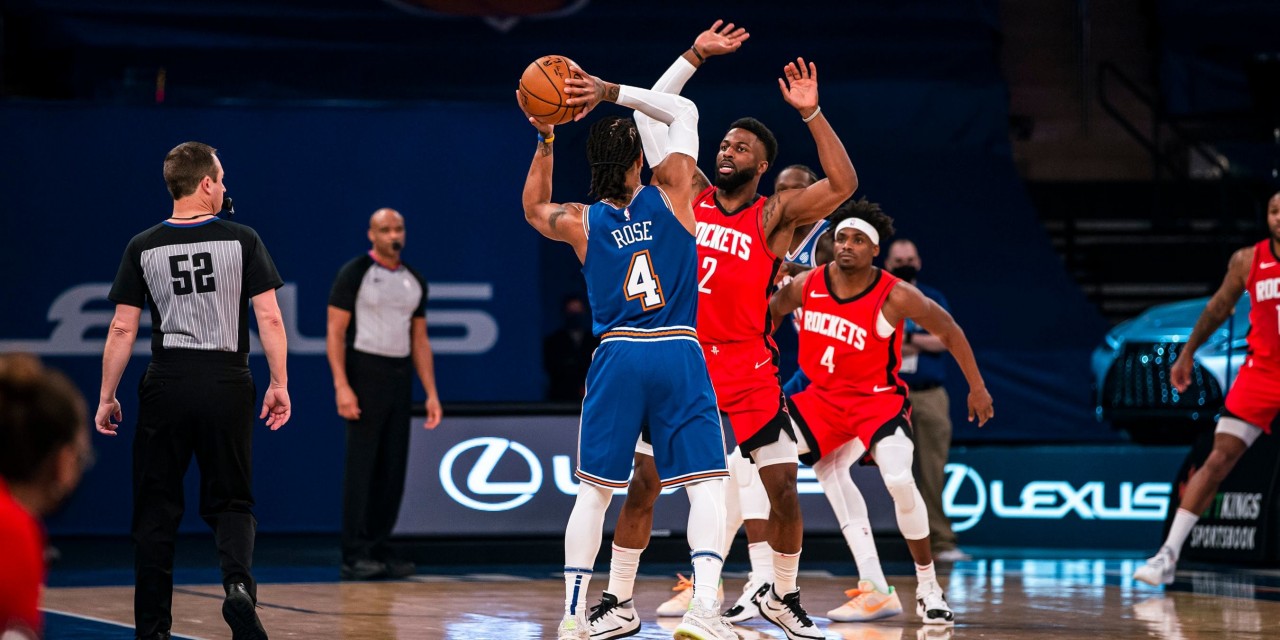 The Knicks have six consecutive games on the road, starting with the Rockets, that may make or break the final seeding for the playoffs.

Following a 5-1 homestand that has them in sole possession of fourth place in the Eastern Conference and on the verge of their first winning season since 2012–13, the New York Knicks (35-28) hit the road for a six-game west coast swing, starting tonight against the Houston Rockets (16-48).

This is a meeting of two teams that have traded places rather quickly. A year ago it was the Rockets thinking about the playoffs and the Knicks about the lottery. Now, the Rockets own the worst record in the NBA and are about to undertake a massive rebuild. It is for that reason that this is as close to a must-win for the Knicks as it gets.

After tonight, the Knicks embark on a five-game stretch that progressively gets tougher. If they want to not only avoid the play-in games but secure homecourt for the first round of the playoffs, a 3-3 record from their final road trip of the season is a bare minimum.

Here are some things to look out for tonight.

Beat the Teams You Are Supposed to Beat

The Knicks have done a great job beating the teams they are supposed to beat. It has been a rare sight for the team to play down to competition. They cannot afford to buck that trend tonight. As the Milwaukee Bucks learned Friday, the Rockets can still sneak a win in if you let your guard down.

Kevin Porter Jr. exploded for 50 points, Christian Wood had 31, and the Bucks dropped a game they really didn’t want to lose. The Knicks cannot allow an offensive explosion to happen on Sunday night.

This is where Tom Thibodeau’s personality and coaching style becomes valuable. He will yell if the team is up 20 or down 20. If the team does have a sluggish you can bet Thibodeau will not hesitate to ruffle feathers.

Obi Toppin has quietly put together a nice string of games even if the box score doesn’t totally reflect it. Toppin looks much more comfortable on the floor, thanks in large part to finding consistent minutes with the bench mob.

He has developed strong chemistry with Derrick Rose and Immanuel Quickley and improved his rebounding. He has an offensive board in his last four games and has put together a couple of six-rebound outings, which is impressive given the brief floor time.

The next step for Toppin getting that bump in floor time. He has not played more than 15 minutes over the past 11 games. Randle needs more rest as games get more intense, Toppin could be progressing at the perfect time, why not find out? Tonight is a great opportunity for Thibodeau to do just that.

Matchup of the Night: Julius Randle vs. Christian Wood

Let’s see if some of R.J. Barrett’s pettiness has rubbed off on Julius Randle. Christian Wood was a name that was heavily connected to New York, with the intention of replacing Randle. Wood missed the previous game at the Garden, so Randle was unable to show his cards.

Tonight Wood will be in the lineup and matched up against Randle. In addition to the Wood to New York rumors, Wood was also in the running for Most Improved Player. Randle has already locked the award up, however, it could be an opportunity to flex his superiority.