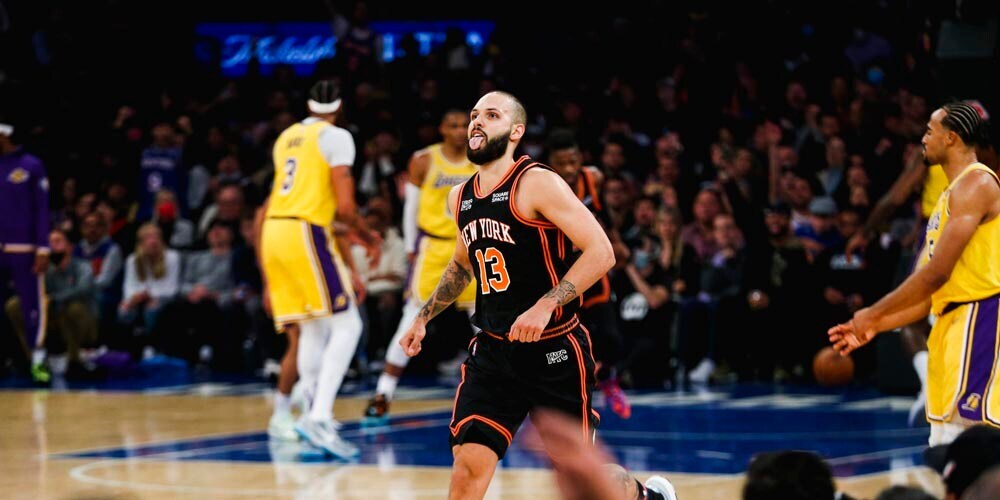 The Knicks are in La La Land to play a LeBron and the Lakers. Reinforced with Anthony Davis and Russell Westbrook, New York looks to tally a win before they face behemoths in the West.

The New York Knicks (24-28) are on the precipice of a brutal stretch on the west coast, but before that, they touch down in Los Angeles to take on the Lakers (25-28) in the newly named Crypto.com Arena.

In their first meeting of the season in Madison Square Garden, the Knicks came out victorious, beating the Lakers 106-100 back in November despite a Russell Westbrook triple-double. The Lakers, much like the Knicks, are having an enormously disappointing season and, per reports, are desperately trying to make trades to turn their fortunes around.

Things for Los Angeles are in dire straits as LeBron James continues to miss games. James has not played in the Lakers’ last five games—they are 1-4 in those tilts. In total, the Lakers are 6-11 in the 17 games James has missed this season. If James misses this game as well he would have missed the season series against New York; in the first meeting, he was serving a one-game suspension for an on-court altercation involving the Detroit Pistons’ Isaiah Stewart. James was recently voted to his 18th All-Star Game and will be serving as his team’s captain for the fourth year in a row. He is now tied for second place with fellow Laker great, the late Kobe Bryant, in All-Star Game appearances, and just one behind another legendary Laker, Kareem Abdul-Jabbar, who holds the record with 19 appearances.

Los Angeles will also be without former Knick Carmelo Anthony, who strained his right hamstring in his team’s loss versus their “hallway rival” Los Angeles Clippers. The Lakers still have plenty of firepower in the tank. Anthony Davis is coming off a monster game versus the Clippers, as he scored 30 points and grabbed 17 rebounds. Westbrook, who is having a down season by his standards, is always liable for a big night, especially if some of L.A.’s other top guns are out.

As for New York, they haven’t fared much better. The Knicks are 3-7 in their last 10 games. Like the Lakers, they are also 1-4 in their last five games and are coming off a home loss to Ja Morant’s Memphis Grizzlies. It’s not all bad for New York though. RJ Barrett continues to play well in the new year; after averaging 21.8 points in January (the most of any month of his career) he scored 23 points against the Grizzlies to kick off February. Barrett has pushed his game into another gear since hitting that game-winner versus the Boston Celtics back on January 6th.

BLOCKED BY ROBINSON!! AND AN RJ SLAM ON THE OTHER END!! 🗣 pic.twitter.com/zxA1wH2WVm

Another Knick who got comfortable in January was Evan Fournier. After a rough start to his tenure in New York, Fournier seems to have found his stroke; he shot 45.7% from three-point distance last month and started the new month off with a 30-point performance, which included eight made three-pointers versus Memphis. Mitchell Robinson hopes to build on an excellent game after recording eight blocks against the Grizzlies. These are encouraging signs as the trade deadline looms close and New York possibly gears up to make a move to propel them back into playoff contention. With the recent news of the Knicks’ interest in Sacramento Kings guard De’Aaron Fox, it would benefit New York to be playing well to make Fox’s transition easier if the Knicks were to acquire him.

The road is about to get real tough for New York after this west coast warm-up in Los Angeles. After this winnable one, they face a Western Conference gauntlet that will include two of the top four seeds in the Utah Jazz and the Golden State Warriors—who have added a healthy Klay Thompson since their previous meeting wherein Stephen Curry broke the all-time three-point record at Madison Square Garden (because of course he did). Anyway, the Knicks need to do everything they can to secure this victory against a possibly depleted Lakers squad.

PRIZEPICKS OF THE NIGHT

The Knicks Wall’s exclusive partnership with PrizePicks presents the picks of the night. Tonight’s picks are Russell Westbrook, the maligned Lakers star on his fourth team in as many years, and Knicks center Mitchell Robinson, who’s having a productive 2022 thus far. Robinson’s first-half points projection is set at 4.0—we’re hitting “over” on that. Westbrook’s full-game points, rebounds, and assists tally is projected at 33.5. That’s another “over” pick.

Nothing to report from the Knicks’ side. Derrick Rose is out until after the All-Star break.

For the Lakers, LeBron James is listed as doubtful while Anthony Davis is probable. ‘Melo is out along with Kendrick Nunn.

James, who was doubtful earlier today, was activated and plans to play tonight after a game-time decision, per the Lakers’ Mike Trudell.