Knicks’ Kids Struck With COVID-19 Outbreak at the Worst Time 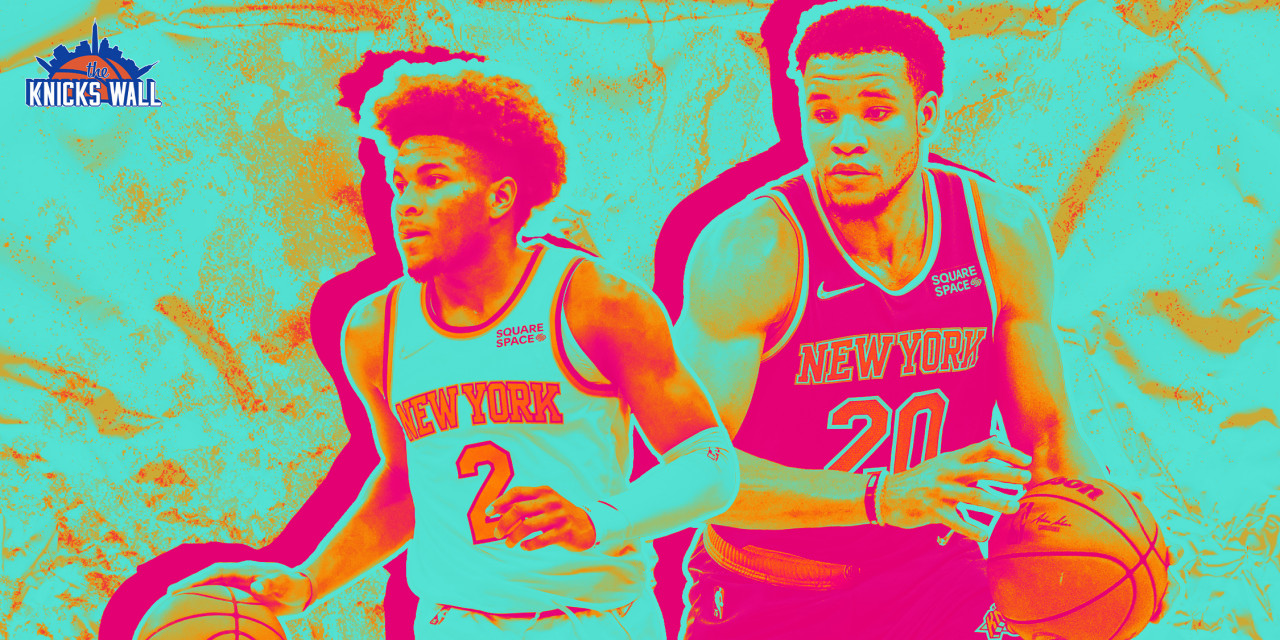 The rise in COVID-19 cases across the country struck the Knicks hard, too—especially taking down the young players just as they saw action.

The New York Knicks and the rest of the NBA are currently being ravaged by a spike in COVID-19 cases. A double-digit number of players are entering healthy and safety protocols daily and games are getting postponed. It’s been a rough couple of weeks for the Knicks especially, with key players continuing to go down, they’re extremely shorthanded and 3-7 in December so far. There are currently six Knicks in healthy and safety protocols: Obi Toppin, RJ Barrett, Quentin Grimes, Kevin Knox, Immanuel Quickley, and Miles “Deuce” McBride.

If you can glean anything bright from these unfortunate circumstances, it’s that it has taught the Knicks one thing: at the very least, the kids need to play—all of them. Every time a player goes down, one of the younger guys steps up and takes advantage of his opportunity; unfortunately, after playing well, said younger players also go into health and safety protocols.

It’s a strange happenstance. Once a young up-and-comer for the Knicks has a career performance, they immediately test positive for COVID-19. Starting with Obi Toppin, in the last game he played versus the Toronto Raptors, he immediately went into protocols following a career-best 19 points. RJ Barrett followed Toppin into protocols. In his first career start, in place for Barrett, Grimes proved why the Knicks selected him with their first-round pick in the 2021 NBA Draft. He scored 27 points and drilled seven three-pointers. Unfortunately, the encore will have to wait. After his master class, Grimes joined Toppin and Barrett in COVID protocols before having a chance to build off an early career-best effort.

Up next, it was forgotten man and fourth-year pro Kevin Knox, who gave the Knicks two solid back-to-back performances. In one game, he hit five three-pointers. It was the best version of Knox anyone has seen in a while before he also joined the others on the COVID list. Immanuel Quickley, who had been having an up-and-down sophomore season was starting to get back into form following his career-best seven made three-pointers in a game against the Houston Rockets. He would be ruled out the following games after his career night.

And finally, the youngest Knick and rookie, Deuce McBride had the best game of his young career—15 points, nine assists and four steals, and zero turnovers. It was a performance that could raise questions and answer them at the point guard position for the Knicks. In a game where he played more minutes than he had played combined for the entire season, McBride was impressive and made his mark before entering his quarantine.

McBride possibly has the most to gain of all the players currently out. He looked like what the Knicks have been missing and searching for in perpetuity—that elusive modern NBA point guard. In his 35 minutes in Houston, McBride looked nothing short of the floor general the Knicks have been sorely lacking. He controlled the tempo of the game, pushed the ball, moved the ball to his open teammates, and scored when it was necessary. He’s no slouch on defense either, it seems like he’s guarding his man for 94 feet. McBride’s prowess on the court is no surprise. In his time with the Westchester Knicks, he’s been impressive. In his G League stint, Deuce was averaging 26.8 points, 9.5 assists, and 6.0 rebounds.

Tom Thibodeau has been pretty set in his lineups and rotations, and it usually takes a lot to crack it … for example, a COVID-19 outbreak forcing his hand. As we’ve mentioned from time to time, it’s important to see through your investment. The Knicks need all the help they can get, and these kids are hungry to show what they’ve got.

McBride could be the answer to a question that has eluded the Knicks for decades: find a franchise point guard. Even though it’s only one game and he’s currently in healthy and safety protocol, McBride has done something only two other Knicks have done before. Mark Jackson did it twice, the first time in a game in 1987 versus the Phoenix Suns he scored 21 points, nine assists, and four steals, and a second time in 1988 versus the Chicago Bulls he scored 16 points, 14 assists, and four steals.

By no means should McBride be starting, but his role should be increased and he should be playing far more significant minutes as soon as he returns from protocols. McBride has shown how effective he can be on both ends of the court and he plays the kind of hard-nosed basketball the head coach preaches. The Knicks have two veteran point guards on the roster; Kemba Walker, who’s recently been brought back into the fold and playing well, and Derrick Rose. The issue, however, is Thibodeau can’t depend on them to play heavy minutes. Both players were signed for limited roles and that’s where a young player like McBride can fill those unmanned minutes. Deuce has proven to be effective and can help older guys like Walker and Rose stay fresh during a grinding NBA season in which they both have already missed extended time.

The Knicks have no shortages of young players, like Kevin Knox, who is 22 years old despite his fourth NBA season and is the longest-tenured Knick. Knox’s future and role on the team are still uncertain, but in the short period, his play recently showed how he can help a team. At the very least, Knox can be showcased and used as a trade chip later on, or he can carve out a role for himself on the Knicks going forward.

Once the team is fully healthy, wholesale changes need to be made to the lineup. The fact is the Knicks are not a contending team at the time being and they need to figure out who they are and what they have going forward. The best way to do that is to see what the likes of Grimes and McBride are made of and the early returns have been encouraging. Grimes and McBride are very reminiscent of Toppin and Quickley from last year—they both broke out in their rookie campaigns and showed they could help the Knicks win. The former two are trying to show how they can do the same.