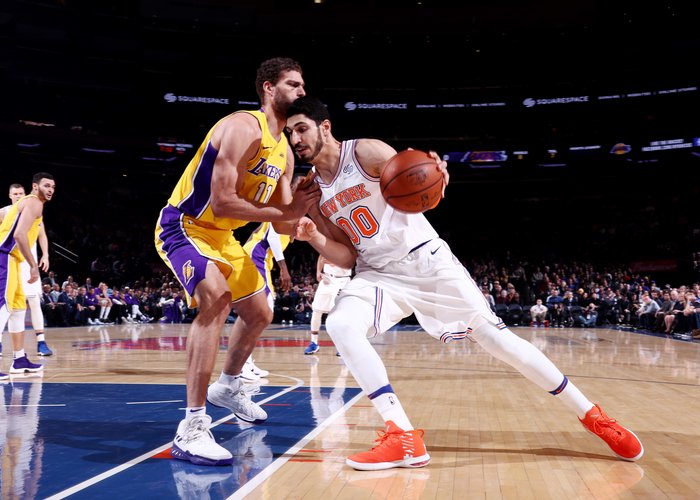 The Knicks are back in action in a matinee contest against the Los Angeles Lakers, looking to string together some wins on the road.

After a dire result against the Memphis Grizzlies, the New York Knicks were able to come out with offensive tenacity and squeeze out a win against the Utah Jazz behind a 31 point performance from Tim Hardaway Jr.

Now, having gone 1-1 thus far on their road trip, the Knicks will attempt to garner momentum from their last win and apply it against a shorthanded Los Angeles Lakers team.

Heading into Sunday’s matchup, Luke Walton’s team will be without Lonzo Ball, while Kentavious Caldwell-Pope and Brandon Ingram remain questionable. This will be the fourth straight game Ball has missed with his lingering knee injury. The Lakers won their first game with Ball out this season after losing the previous seven when they beat the Indiana Pacers 99-86 on Friday. Coming off of the bench and absorbing some of Ball’s minutes, Jordan Clarkson was able to put on a show for a depleted Lakers squad as he poured in 34 points, seven assists, and seven rebounds in their win against Indiana.

The Lakers are currently 16-29 on the year and sit tied with the Grizzlies for 12th place in a competitive Western Conference. The Knicks currently sit 2.5 games out of the eighth seed with a 21-25 record, and matchups such as this remain critical to their success this season.

Here’s what to watch for when the Knicks and Lakers square off:

With the Lakers shorthanded, missing Ball and potentially Ingram and Caldwell-Pope, there is clearly going to be a hole in the defense. That hole is going to be on the wing, and for a hot Hardaway Jr., we might see him become the go-to option on Sunday afternoon. With Kristaps Porzingis taking a backseat against the Jazz, Rodney Hood and Donovan Mitchell struggled to defend the Michigan alumni as he notched 31 points, five rebounds, and three assists.

The Lakers free-throw shooting woes have been well documented, but against the Pacers, they truly flopped as they made just 14.3 percent of their attempts (2-14). Against them, the Knicks might benefit from applying pressure inside, and not being concerned with sending them to the line. Shorthanded, the Lakers could be missing their best free-throw shooter in Caldwell-Pope (76 percent), and with the team shooting 68.8 percent from the charity stripe, the Knicks interior duo of Enes Kanter and Porzingis might prove to be too much.

Against the Jazz, Porzingis was tied with Courtney Lee for points (18) with Lee shooting more efficiently. That cannot happen again. As the bona fide star of the team, Porzingis and Hardaway Jr. are the two focal points of this suddenly exciting Knicks offense, and if they are able to build off of one another’s performances, this Knicks team can possibly do something big in the second half of this season. The common trend seems to be that Hardaway Jr. and Porzingis trade off productive performances, but for the Knicks to truly be a playoff team, both need to function together as a unit. Facing a shorthanded Lakers team, this might be the perfect time for it to click.

Ball and Caldwell-Pope are officially out while Brandon Ingram is a game time decision for L.A. (via Daily News‘ Stefan Bondy).

Ingram will play, according to Bill Oram of So Cal News Group.