The two New York basketball franchises share identical records and a notable player sidelined for extended time due to injury. Can Hardaway and the Knicks shoot the chaotic Nets out of the gym?

Coming off a disappointing 128-100 loss to the Boston Celtics, the Knicks are back in action on Friday against their crosstown rival.

Both teams enter the game at 8-18 on the season and look to face off for the third time in the Battle of the Boroughs. With the series currently split 1-1, high stakes are on the line heading into this matchup.

Here’s what to look for in tonight’s episode of Friday Night Knicks.

Thursday’s loss to the Boston Celtics marked the third straight DNP-CD for Knicks second-year guard Frank Ntilikina. It’s been a frustrating past week for him, as it appears the Knicks have entirely given up on the 20-year-old prospect.

After starting a few games earlier this season and showing flashes of potential, Ntilikina has fallen into a deep slump over the course of November. On the season, he is currently averaging 5.9 points, 2.7 assists, and 1.9 rebounds per game while shooting a dismal 33 percent from the field. On a rebuilding team where the youth movement is fully embraced, it’s quite a concern that Ntilikina has been benched the past three games. Ntilikina and Ron Baker remain the lone Knicks to have not sniffed the court in December. The only difference is Ntilikina is a lottery pick from a year ago while Ron Baker…is Ron Baker.

With speculation and rumors circulating the league regarding a trade centered around Ntilikina, it will be interesting to see if he returns to the court tonight. In a recent interview with reporters, Ntilikina became “testy” with reporters over questions surrounding his lack of play time. This situation has a chance to get out of control quick. The longer the Knicks keep Ntilikina on the bench, the more likely it is we have seen the last of his career in New York.

When you see Fizdale give Frank Ntilikina another DNP-CD pic.twitter.com/v2SalxS2aC

After a red-hot start to the season, Tim Hardaway Jr. has started to slow down throughout November. Averaging 26 points per game while shooting 43 percent from the field in October, Timmy has averaged just 20 points per game with a field goal percentage under 40 percent in November.

With Hardaway Jr. being the top scoring option for the Knicks due to Kristaps Porzingis’ absence, it’s clear that his play is beginning to fall back to reality. Although he has consistently struggled of late, Hardaway has posted 20+ points in the last three contests, while shooting almost 40 percent during the course of those games.

Keep an eye on THJ in this matchup to see if he builds off the momentum of the past few games and starts to return to early-season form.

Matchup by the Numbers

With both teams sharing the same record, it’s not surprising that their season statistics are so similar. However, it is quite remarkable how similar some of these differentials are, with three of them (points per game, offensive rebounds per game, turnovers per game) being a difference of just 0.1. 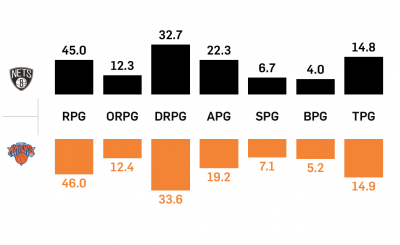 Knicks Seek Rare Over-.500 Record With Pistons Matchup on Tap

Knicks in Prime Position to Capitalize Over Slumping Kings