Knicks Look to Bounce Back With Pistons Rematch 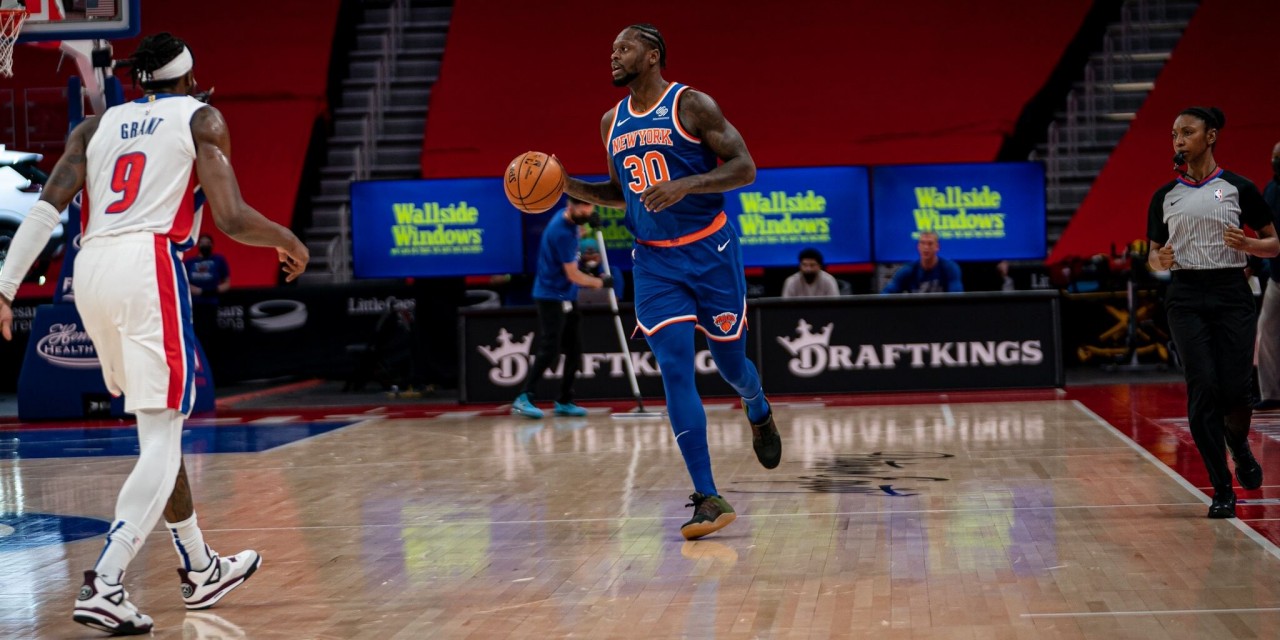 The Knicks play the Pistons for the second time in three games to close out the first-half schedule of the 2020–21 NBA season.

The New York Knicks (18-18) look to begin a new winning streak against the bottom-dweller Detroit Pistons (10-25).

The Knicks had a short-lived run of living above .500 as the San Antonio Spurs trounced them on Tuesday night in Texas, bringing New York back to reality. The opportunity to get back above .500 presents itself tonight against the woeful Pistons, however, but it may not be as easy as New York would hope.

Derrick Rose (healthy and safety protocols), Taj Gibson (sprained left ankle), and Elfrid Payton (sore right hamstring) all missed the last contest against the Spurs, and Rose is the only one expected to return to the lineup.

With three rotation players out (Payton, Gibson, and Mitchell Robinson), the Knicks will again rely on players like rookie Obi Toppin, Frank Ntilikina, and Kevin Knox to step up and play bigger roles than they are accustomed to this season while also relying on their key starters to log more efficient minutes.

The last time these two teams met, the Knicks win made them above .500, can history repeat itself a week later?

Tip-off is scheduled for 7:30 p.m. ET at Madison Square Garden with Detroit playing the second night of a back-to-back after defeating the COVID-depleted Toronto Raptors on Wednesday.

Getting off to a better start

New York struggled against the Spurs to score, with only 23 first-quarter points and 93 total for the contest. The offense stalled and saw stagnant movement without the orchestration of Derrick Rose or Elfrid Payton. Knicks head coach Tom Thibodeau elected to start the Frenchman Frank Ntilikina over standout first-round pick Immanuel Quickley. Thibs may get his wish should Rose return and again fill Payton’s spot in the starting lineup—and Quickley maintaining control of the second unit.

6 more of these from IQ and we are RIGHT back in this pic.twitter.com/MjgUJD7G42

Ntilikina was decent in that starting role last game, but the Knicks are a unique team. The majority of the playmaking comes from their All-Star forward Julius Randle, and with opponents not treating Ntilikina as a threat to score, spacing was an issue all night. Quickley is a threat to shoot, make plays off the dribble, and is a third pick-and-roll ball-handler along with R.J. Barrett and Randle. Against a weak Pistons defense, Quickley could take a lot of pressure off those guys.

The importance of taking care of business

It’s fair to say the Knicks have exceeded any expectations placed upon them this season, but as good as these first 36 games have felt, they must continue to take care of the bad teams. The All-Star break is fast approaching and the Knicks possess the sixth-hardest second-half schedule of the NBA, per Tankathon. March will be a huge test to the boys in orange and blue as they face the Milwaukee Bucks once, the Brooklyn Nets once, the Miami Heat once, and the current top-seeded Philadelphia 76ers twice. The margin for error is thin in the East where the sixth and 10th seeds are separated by only 1.5 games. So what can New York do to ensure a victory over Detroit?

Keys to the game

After tonight the Knicks will enjoy some time off due to All-Star Weekend. When they return to play their first three games will be against the Bucks, Oklahoma City Thunder, and crosstown rival Nets.

UPDATE: There are several pending availabilities for Knicks-Pistons tonight. First, Pistons forward and Most Improved Player candidate Jerami Grant is out (left quad), along with Josh Jackson, per James Edwards III of The Athletic. Derrick Rose (health and safety protocols) is out, too, per the Knicks.