Knicks Look to Build Off Home Win With Wizards Visit 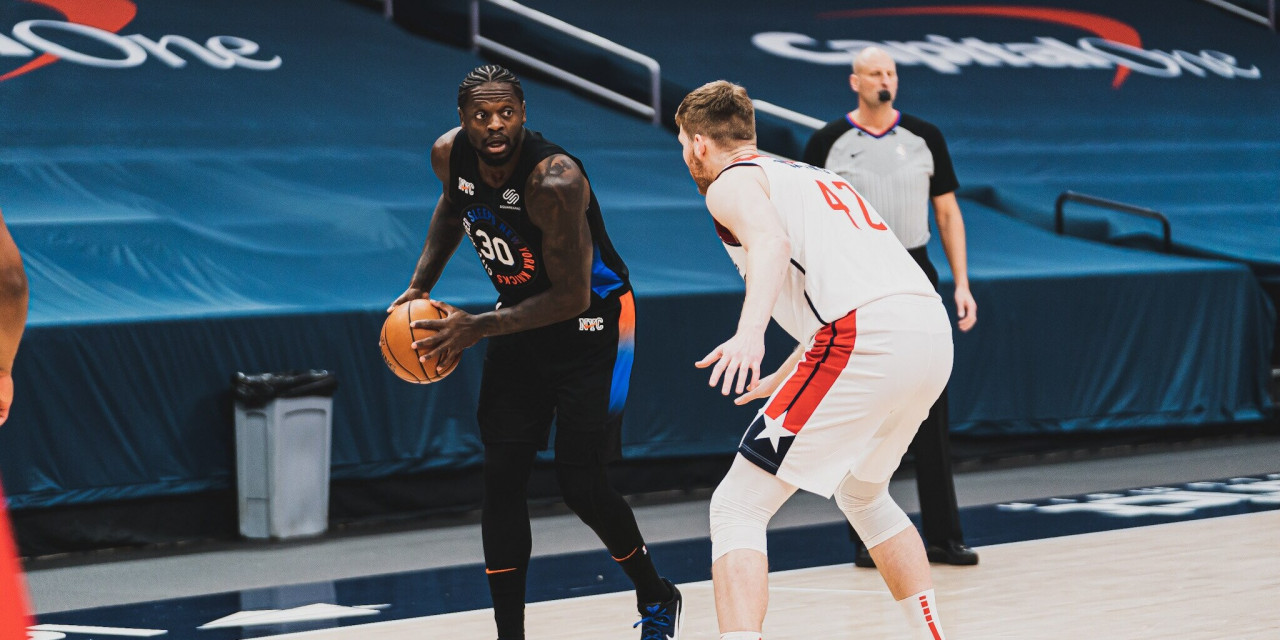 The Knicks, with several contributors out, face a rested Wizards team at Madison Square Garden ahead of the Christmas Day tilt.

The undermanned New York Knicks (14-17) snapped a five-game losing streak at Madison Square Garden last time out against the Detroit Pistons in what was the breakout Mitchell Robinson performance (17 points, 14 rebounds, three blocks) many had been waiting to see.

Aside from Robinson looking like a man amongst boys, the Knickerbockers opening night backcourt had another strong outing, with Kemba Walker for the second consecutive and Evan Fournier for the third consecutive game eclipsing the 20-point mark.

New York continues to have players sidelined in the NBA’s health and safety protocols with Nerlens Noel being the latest casualty. He joins Kevin Knox, Miles McBride, and Immanuel Quickley in isolation.

News also broke Derrick Rose faces, in the Knicks’ eyes, a devastatingly long stint on the sidelines after undergoing successful right ankle surgery. He will be re-evaluated in eight weeks, although there is hope it will be closer to six weeks. As a result, Kemba Walker will continue to get all the minutes he can handle meaning the redemption tour continues.

However, New York will be potentially buoyed by the return of sophomore sensation Obi Toppin who has cleared protocols and has returned to the team. It is unclear if the 23-year-old will play or if faces time on the sidelines to regain conditioning. Joining Toppin is RJ Barrett, cleared earlier today from protocols.

The Washington Wizards (16-15) will be without Rui Hachimura, who has re-joined the team but is questionable (conditioning) while Thomas Bryant (ACL) remains out. The Wizards have been mostly unscathed to this point by COVID-19, with wing Kentavious Caldwell-Pope their only player in protocols.

The Wizards have had a short sabbatical from play with their game Tuesday against Brooklyn being postponed. Washington most recently played on Saturday in Utah and got a big win against the Jazz behind Bradley Beal’s 37 points.

Washington’s season has followed a similar trajectory to the Knicks. They came out of the gates blistering hot this season, sitting atop the Eastern Conference with a 10-3 record; however, they have slowed down since, going 3-7 in their last 10 games. Rookie coach Wes Unseld Jr.’s team is no longer the offensive juggernaut they once were. The Wizards average 105.2 points per game (24th in the NBA) and make the least amount of three-pointers per game, at 8.7, on the sixth-worst mark (32.2%).

In their recent 3-7 stretch, Washington has had a porous defense with a 115.6 Defensive Rating, which ranks 28th, and has allowed opponents to score at a 45.3% clip.

Bradley Beal has, of course, been the Wizards’ offensive focal point, but the three-time All-Star has struggled shooting this season. Beal’s 23.3 points per game is his worst average in the past four seasons while he is shooting a career-low 28.3% from three-point range on 5.4 attempts. His shot attempts are also down but Beal has been a willing facilitator, dishing out 5.9 assists per game, the second-best mark of his career.

Washington has a formidable sixth man in Montrezl Harrell, who has overcome his last season struggles with the Los Angeles Lakers. The 2019–20 NBA Sixth Man of the Year is averaging 14.5 points per game on 64.2% shooting along with 7.5 rebounds per night, 2.2 of which come on the offensive glass.

The Knicks have struggled to control the defensive glass in periods this season and have been outmatched by physical big men too. New York will have their collective hands full with the former Louisville Cardinal.

New York will be down several guards once again, so it will be important for Walker and Fournier to have another strong performance. Walker, in his return to play and the starting five, has put up 50 points, 14 rebounds, and eight assists (to three turnovers) on 16-for-41 from the field and 8-for-20 from the land of plenty.

After being much maligned, Evan Fournier has bounced back after five consecutive single-digit scoring outputs to put together three consecutive 22+ point games, his first such streak of the season. He has broken even from the field going 30-for-60 overall and 11-for-27 from behind the arc. The two guards have picked up the offensive slack in the absence of Quickley and Barrett, the latter of whom was cleared to return today.

Julius Randle, despite some frustrations and inconsistencies, has scored 20 or more in four consecutive games, the first time he has done so all season. The reigning Most Improved Player is yet to find the range with any consistency this season, but he has converted 34.7% of his threes in the past two weeks. It is still not great, but an improvement—even if only ever so slight.

Despite the points per game being down at 105.4 per game, the ‘Bockers have made up for it by being lights out from the parking lot in this stretch. They’ve made 14.8 three-pointers at a 39.2% clip, which are both good for fifth-best in the Association.

The Knicks will need to be keyed in against the Wizards defensively as their lapses in concentration are evident in the number of second-chance points and opponents’ points off turnovers they are conceding. New York is giving up 14.8 second-chance points per game in their last five games, which ranks in the bottom third, as does their points allowed on giveaways.

The Knicks will be severely shorthanded for the sixth consecutive game with center stocks being hurt by Noel’s absence along with the significant amount of guard outs. Washington is not a team vertically gifted so there may be an opportunity for the Knicks to play small with Randle at the 5 with Toppin at power forward. If not, things could get funky with a four-guard set plus Julius.

The Knicks will be looking to improve their ghastly 6-10 home record when they face Washington at 7:30 p.m. ET.

Quentin Grimes has been cleared from health and safety protocols and rejoined the team.