Knicks Look to Build Off Opener as They Welcome Wizards 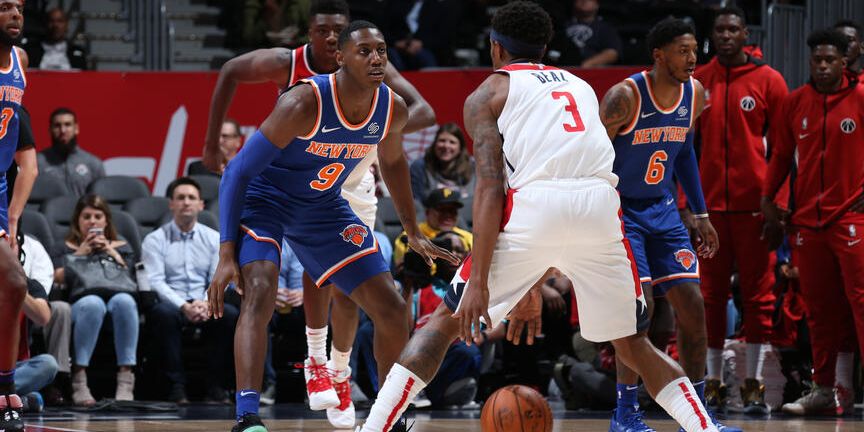 For the second time in a row, the Knicks will play the Washington Wizards in preseason. Here’s what to expect from RJ Barrett and company.

Following a strong start to their preseason, the Knicks will complete a home-and-home with the Washington Wizards at Madison Square Garden. In the opener, the big signing, Julius Randle, and the prized rookie, R.J. Barrett, both shined.

Randle put up a solid 11 points, seven rebounds, and seven assists. Barrett fought off a rough start to finish with a team-high 17 points to go along with seven rebounds and three assists. Marcus Morris added to the good news and managed to steal the show with a non-basketball, but very funny, play that ended in an ejection.

lmao Mook is ready at a drop of a hat pic.twitter.com/VC2glIFy6B

As we look forward to tonight David Fizdale will look for a repeat effort by his refurbished crew, and hopefully get some looks from guys who didn’t see the floor in the opener.

Here is what to look out for tonight.

Fizdale kept a pretty tight rotation to start the preseason. Only 1- guys played, with a couple “DNP – Coach’s Decision”s. The most notable of these DNPs was Iggy Braz (Ignas Brazdeikis) who was a Summer League breakout player. It would be an odd move to not see Fizdale hold Brazdeikis out of action once again.

Fellow Summer League standout Kenny Wooten didn’t see the floor either which was a little more puzzling with Bobby Portis out with a rib contusion. Wooten is now dealing with a sprained ankle so might have to wait yet another game before he debuts.

Stop me when you heard this before—a veteran player is being considered for starting job over two younger players.

What am I referring to? Elfrid Payton, a former Scott Perry draft pick signed over the summer, played “fantastic” according to Fizdale, and many believe is in line to win the starting job. To throw some cold water on this, Dennis Smith Jr. was out with a back injury so he still has time to win the job. The issue is Frank Ntilikina’s performance being thrown to the wayside again.

The offense flowed nicely with Payton, there is no denying that. There is also no denying that when Ntilikina was in the team played better, shown in his +16 versus Payton’s -11. He looked as confident as he ever looked and the lineup of him, Barrett, Kevin Knox, Randle, and Mitchell Robinson looked the best.

If there is a repeat performance by Ntilikina and the needle continues to remain where it is, it’s time to wonder if Fizdale is blind or being asked to favor the veteran players.

One thing has become clear with R.J. Barrett: he gets stronger as the game goes on. He had a suspect first half but finished the night with 17 points on a respectable 46.2% from the field.

The next step in his development is adjusting. He will face the same team in fewer than five days who now know what to look for. How does Barrett alter his game to keep them on their toes? Will he force the action in his first home game? Does he continue to search for a reliable outside shot? If Bradley Beal ends up suiting up, does he improve on the defensive end?

These are the things we want to see from Barrett. Fizdale said he will treat Barrett exactly the way he treated Knox. In other words, Barrett will likely start the whole preseason, begin the season on the bench, before re-entering the starting lineup for good.

Until then, everything Barrett does will be dissected. Tonight will be no different.