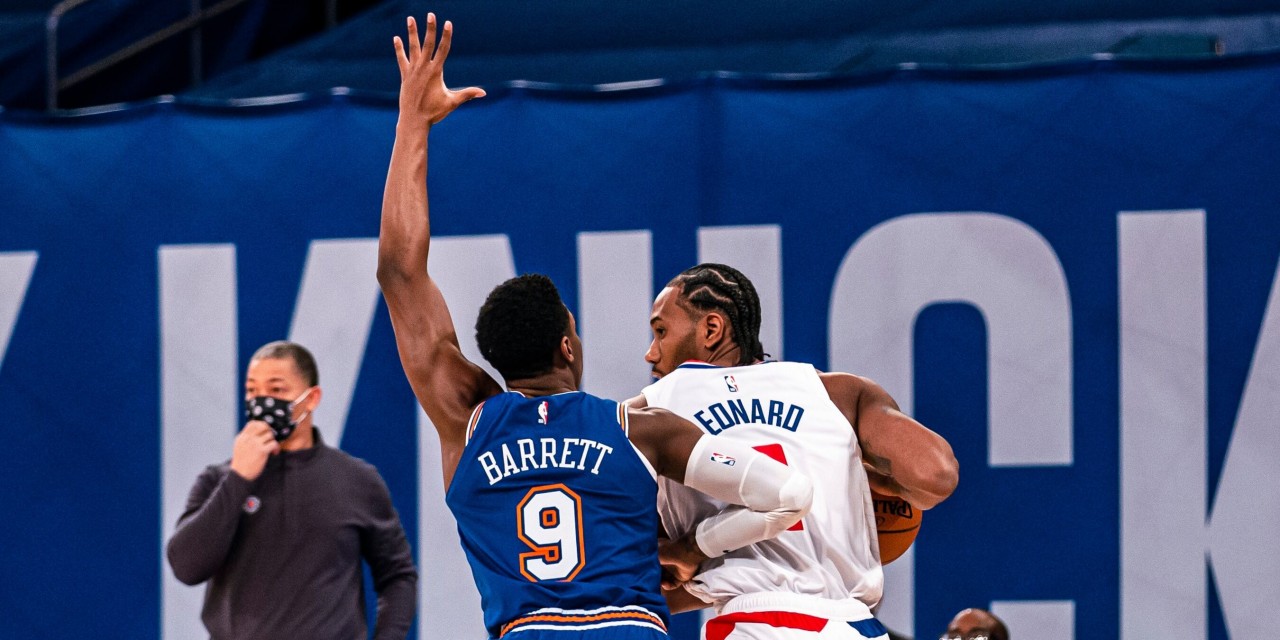 The Knicks look to hold on to the fourth seed and regain their form as they travel for a two-game swing in Los Angeles. It starts with Kawhi Leonard and the Clippers.

With just four games left in the regular season, the New York Knicks (37-30) are putting the finishing touches on one of the more refreshing seasons in franchise history. With muddled expectations in the preseason, the Knicks quickly broke through, thanks to the remarkable play of first-time All-Star Julius Randle, second-year swingman R.J. Barrett, and first-year head coach Tom Thibodeau.

But recently, the Knicks have fallen out of form. After starting their road trip with wins against the Rockets and Grizzlies, New York was slapped back down to earth by two Western Conference powerhouses, the Denver Nuggets and Phoenix Suns, in back-to-back games. Injuries are a part of the blame, but New York visibly struggled to keep up with the top teams in the West.

New York should look to rebound with just two games remaining on their road trip before heading back home to the Garden.

Whether they start their playoff journey with a home game or not is up to them. With the race for the fourth seed in the Eastern Conference razor-thin, the Knicks control their destiny: Win out and claim the fourth seed. No one predicted that the Knicks would make the playoffs in the preseason, let alone homecourt advantage in the first round. The Atlanta Hawks and Miami Heat remain within striking distance, meaning New York can’t let up now.

It doesn’t get easier as New York continues their trip against another top team in the Western Conference—the Los Angeles Clippers (45-22).

For the Clippers, it starts with their top two players: Kawhi Leonard and Paul George. Leonard and George are the best two-way wing combination in the NBA. Their combination of shot creation, outside shooting, and defensive versatility could dismantle most defenses and made Los Angeles an instant contender.

But it doesn’t stop there. First-year coach Tyronn Lue has stabilized the defense, with Los Angeles ranking 10th in the league in defensive efficiency. Marcus Morris and Serge Ibaka offer experience frontcourt depth. Reggie Jackson is shooting 43.8% from the outside this season. Guys like Rajon Rondo, Luke Kennard, Ivica Zubac, and a returning Patrick Beverley gives Los Angeles the depth to compete for a championship.

The last time the Clippers and Knicks went at it was January 31st, where the Clippers took care of a business 129-115. Leonard finished with 28 points and four rebounds while Barrett totaled 23 points. After the game, Leonard had some positive words about Barrett’s performance. Julius Randle finished with a stellar 27 points, 15 rebounds, and five assists, while George backed Leonard up with 17 points, eight rebounds, and five assists.

The game went back and forth with very few errors; both teams combined for just 14 turnovers. The difference was Los Angeles’ offense having a bit more firepower than New York. The Clippers finished with 54.3% shooting from the field for the night, including a staggering 44.7% from the outside. Even a shocking performance from Quickley (25 points off the bench) couldn’t boost New York enough to surpass Los Angeles’ offensive power.

The Knicks are in trouble without Quickley and Burks. Burks’ ability to score off the dribble and generate his own offense was greatly missed in the second unit, as New York’s offense has leaned on Derrick Rose in recent weeks. Between the scoring ability and Thibodeau’s reliance on Burks to handle the point guard position in spurts, the Knicks have played mostly the last two weeks without a key contributor off the bench.

As for Quickley, this setback comes just as soon as he was heating up. The game began to slow down for him. He continues to launch long-range threes and offers defense-bending spacing, but recently, he was becoming a bit more comfortable as a ball-handler and became more advantageous when attacking the rim. Burks’ absence hurts, but Quickley’s skill set is missed more, as the Knicks lack players on the roster who offer the gravity Quickley does when his shot is falling.

Stifling the role players: Leonard and George will beat you; that’s a given. However, the Knicks have to stifle the likes of Morris, Ibaka, and the likes. In their last encounter, Jackson had 18 points, Ibaka had 15, and Morris had 11. Attempting to keep pressure on them and forcing Leonard and George to beat you is the way to go.

Tightening up the defense: I’m sure Knicks head coach Tom Thibodeau feels frustrated after allowing 128 points to Phoenix. This won’t be a game where the Knicks completely shut down the Clippers, but a good game to reinforce their defensive game plan. One thing is the stop allowing so many corner threes. Even as Leonard and George heat up, the Knicks must remain active to avoid the likes of Morris and Kennard getting wide-open looks from the outside.