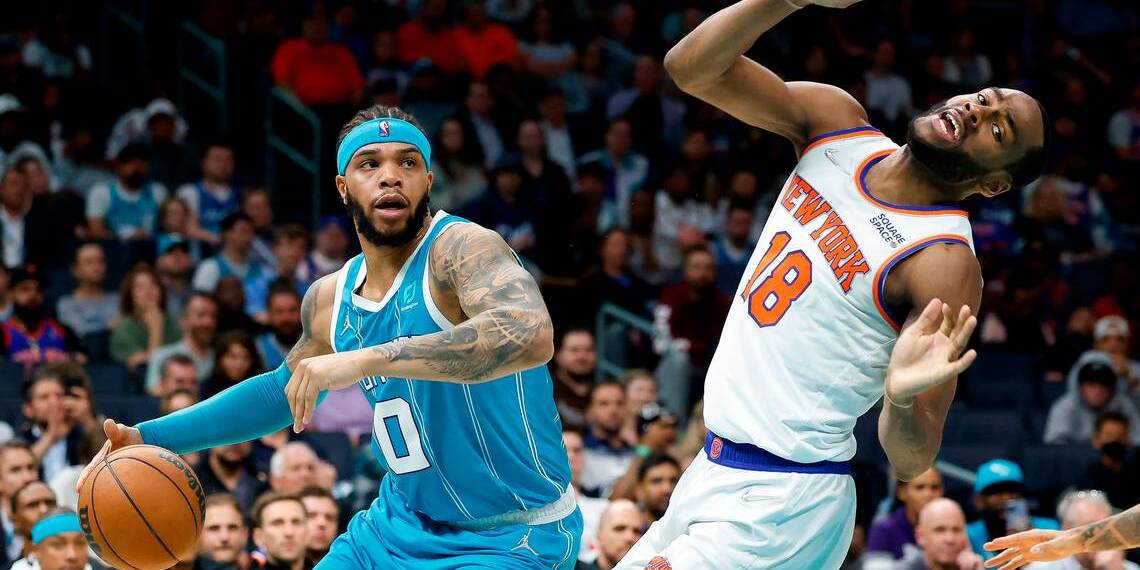 The Knicks are looking to win their fifth consecutive game as they look to keep their playoff hopes alive. The Hornets stand in their way.

The 2021–22 regular season is winding down, and the New York Knicks (34-42) are gearing up for one last game to close the month of March.

New York will welcome the Charlotte Hornets (39-37) to Madison Square Garden for the final time this season. Although their play-in spot hopes are fading away, the Knicks don’t plan on going away quietly to end the year. They are currently riding a four-game winning streak, their longest of the season, and they’ll get a rematch against Charlotte, who was the first victory that sparked this stretch.

Wednesday’s game is scheduled to tip off at 7:30 p.m. ET on MSG Network and Bally Sports Southeast – Charlotte.

RJ Barrett turning it up for the second half of the season has been well-documented and in the latest win over the Chicago Bulls, he officially became a 20 points-per-game scorer for the first time in his career. He’ll try to sustain that season mark with the last few remaining games of the year. He feasted for 30 points on 10-of-19 shooting in the previous meeting against Charlotte and will be looking for an encore.

RJ is getting everything right now 💪💪 pic.twitter.com/AIwunsoycX

There’s no doubt he’s generated most of the buzz and optimism at this point of the year, but let’s also highlight a couple of secondary players that have also been on a roll as of late and will try to keep it up on Wednesday night: Alec Burks and Obi Toppin.

Burks hit some big shots—including one in the final minute—but he played well from start to finish against Chicago. More importantly, he’s in the middle of the best three-point shooting stretch of his entire career.

For the first time ever, he’s drained at least three or more three-pointers in six straight games. There hasn’t been a stretch that comes close to this over his 11 years in the league. It’s not like he’s just been hacking away and carelessly shooting from beyond the arc, either. Burks is shooting a fairly efficient 20-of-42 (47.6%) from long range and averaging 17.5 points during this six-game streak.

Toppin is also enjoying one of his better stretches of the season. With Julius Randle missing a couple of games recently, the second-year forward has also stepped it up in the frontcourt. Tom Thibodeau has given him more opportunities to play, and he’s capitalized.

He’s scored in double figures in each of the last five games and came close on two separate occasions to eclipsing his career-high mark of 19 points. Toppin has also been flashing a much improved three-point stroke in recent games, and he heated up against the Bulls for a 3-of-6 shooting performance from the perimeter.

Toppin had an impressive 18-point, 11-rebound double-double while shooting 8-of-11 overall, with six assists and no turnovers in the previous game against Charlotte. With the way he’s been playing lately, it looks like he’s due for another big game against the Hornets.

The Hornets face New York in the midst of a tight race with the Brooklyn Nets and Atlanta Hawks, with these teams sitting in the no. 8-10 range in the Eastern Conference standings. The Cleveland Cavaliers, who sit in seventh, have some separation from this trio and are likely able to clinch at least a home play-in game unless it can spring ahead of the Chicago Bulls and Toronto Raptors and secure a playoff spot.

That leaves the other home play-in spot up for grabs. When it’s a do-or-die type of game, every advantage helps, so the Hornets will look to improve their standing. Alternatively, the Hornets could try to duck or manipulate seeding, but the margin is so close between the no. 5-7 teams, as well as the no. 8-10, so it’s still hard to predict matchups. The least they can do is try and get the right to host the play-in game.

The Knicks can potentially make it more difficult for them if they can extend their winning streak and hand Charlotte another loss. The Hornets are led by the trio of Miles Bridges, LaMelo Ball, and Terry Rozier. They’ve been Charlotte’s top scorers this season, but they’ve also tormented the Knicks in different ways.

Bridges is coming in hot, scoring at least 24 points in each of his last three games. Against the Knicks, he’s led his team in scoring in two out of three meetings this season, including an impressive 38-point, 12-rebound outing on January 17th. Even though he was kept quiet in their most recent meeting, Bridges still had 15 points on 7-of-12 shooting and had no problem deferring to others, piling up nine assists with just one turnover.

Rozier has been a consistent two-way presence in all three games against the Knicks, and he can be a bigger threat when he gets going from beyond the arc.

Last and far from least, LaMelo Ball, he’s played well against the Knicks in the two games he played in. In their first meeting, although he struggled to score and was limited to 12 points, he found other ways to contribute and nearly had a triple-double. He had 17 rebounds, nine assists, and even chipped in five steals on November 12th. In their most recent meeting, he tallied 32 points, nine boards, five assists, and knocked down six three-pointers.

Quentin Grimes will miss his third straight game with a sore knee. Evan Fournier is questionable due to personal reasons, per the team. Julius Randle will be playing tonight.