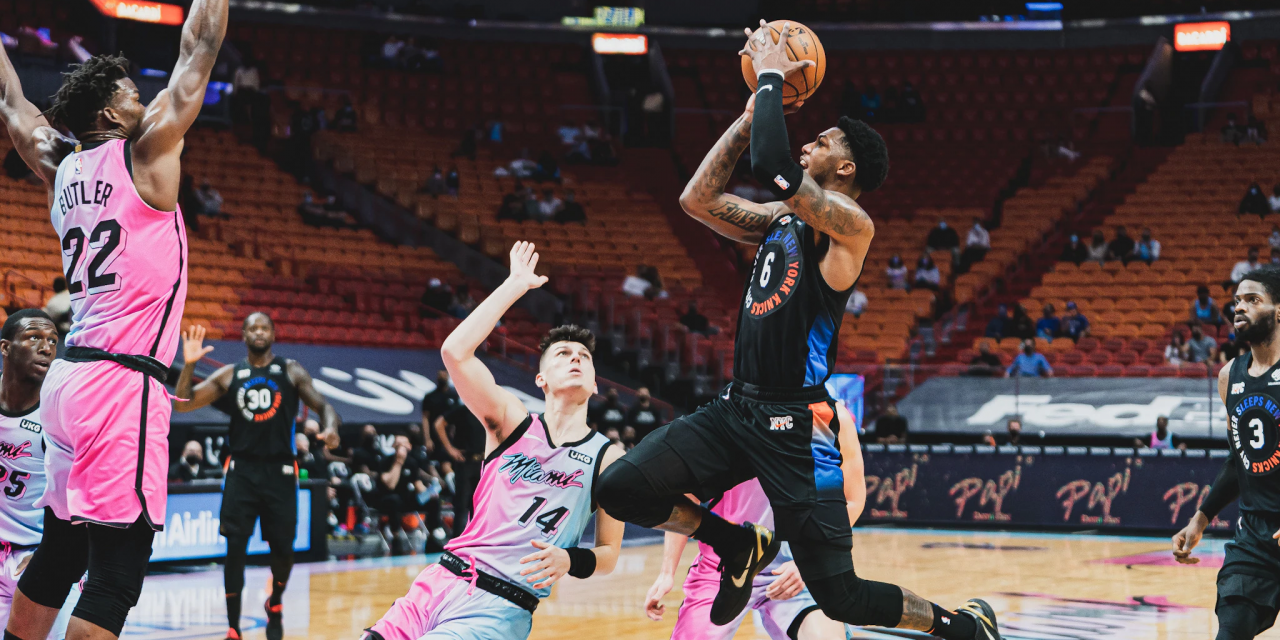 The Knicks have a chance to beat another Eastern Conference playoff hopeful in the Heat on Monday at the Garden.

The New York Knicks (24-22) will be back at Madison Square Garden to face the Miami Heat (22-24) on Monday at 7:30 p.m. ET. New York has won three straight games, catapulting them back up to fourth in the Eastern Conference standings while Miami has lost six straight, bumping them down to eighth in the East.

Julius Randle thrives in the paint and the Heat rank first in the NBA in opponent points in the paint per game at 40.0. Randle had 26 and 12 points in the Knicks’ two games against the Heat this season. No question playing against Bam Adebayo, one of the best centers in the NBA, will be tough for Randle. Looking to dish out to teammates will be key, which Randle has done well this season.

The Knicks will also be faced with the task of defending Jimmy Butler, who’s had a solid season for Miami in all categories. Butler is averaging 21.3 points, 7.8 rebounds, and 7.3 assists this season while shooting 47.9% from the field.

There’s no doubt that this will be an important game for both teams given the landscape of the Eastern Conference. Let’s take a look at some storylines to follow in this game.

The Knicks were mostly quiet at the deadline, moving Austin Rivers and Ignas Brazdeikis, none of whom have had an impact on the team this season. The Heat were extremely aggressive at the deadline: they traded for Victor Oladipo and Nemanja Bjelica while moving on from Avery Bradley, Kelly Olynyk, Maurice Harkless, and Chris Silva.

Oladipo and Bjelica haven’t made their Heat debuts yet. That won’t change for Oladipo, who will be out against the Knicks on Monday with illness. A former All-Star, Oladipo gives the Heat a much-needed additional scorer and creator. The 28-year-old veteran is averaging 20.8 points per game, five rebounds, and 4.7 assists on the season, shooting 41.1% from the field and 33.3% from beyond the arc.

Bjelica will make his debut for the Heat on Monday and is averaging 7.2 points per game, 3.8 rebounds, and 1.9 assists this season. He will likely see his role increase slightly with the Heat. Miami might be struggling, but don’t be surprised if this team turns it around sooner rather than later, especially given these deadline deals.

The Knicks might be riding high right now, but the team suffered a setback on Saturday night when Mitchell Robinson fractured his foot. The timetable for a potential return for Robinson this season hasn’t been announced yet.

Derrick Rose was CRUSHED finding out about @23savage____’s injury live on MSG pic.twitter.com/olsfopRvhS

Due to Robinson’s extensive injury absence this year, the Knicks are used to playing without him. Robinson missed 15 games from mid-February to mid-March with a broken hand. The good news is that backup center Nerlens Noel did a phenomenal job replacing Robinson during this time period. He averaged 6.6 points, 7.1 rebounds, and 2.0 blocks during the time Robinson was out.

Taj Gibson will take over Noel’s backup center role while Robinson is out as well, and it seems likely the Knicks will add another backup center. Noel and Gibson will have their work cut out for them against Adebayo, who’s averaging 19.4 points, 9.4 rebounds, and 5.3 assists this season while shooting 56.6% from the field.

R.J. Barrett is looking like the franchise cornerstone everyone hoped he’d become when the Knicks drafted him third overall. Over his last 13 games, Barrett is averaging 21.3 points, 6.2 rebounds, and 3.6 assists. Additionally, he’s shooting 48.4% from the field and 38.5% from three on four attempts per game.

Last season, it was clear that Barrett had what it took to be a productive NBA player due to his strength, ability to get to the rim, passing, and rebounding. His jump shot and three-point shot have come around this year, unlocking a new level for him and making his ceiling as a player much higher.

Derrick Rose returned Saturday night against the Bucks, after missing 10 games due to COVID-19. Averaging 12.5 points and 4.5 assists on 42.7% from the field, and 40.7% from three, Rose has been an integral part of offensive creation for the bench unit.

In Rose’s first game back, he scored 13 points in 29 minutes. His return will be helpful for the Knicks going forward.

As mentioned before, Victor Oladipo will be out for the Heat due to illness. Kendrick Nunn will miss the game with an ankle injury, per the Heat.