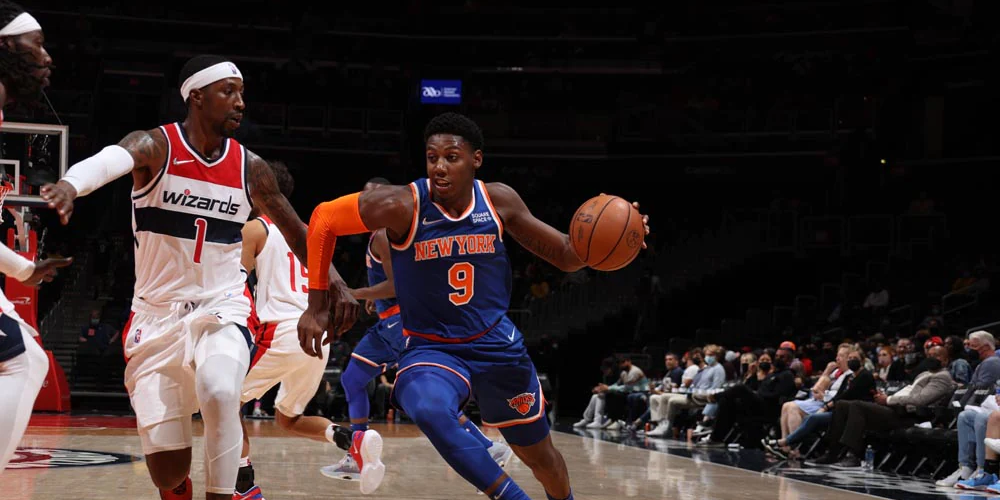 The Knicks play their final preseason game tonight, looking to finish the preseason 4-0 against a winless Washington Wizards team.

The New York Knicks (3-0) are preparing for a rematch with the Washington Wizards (0-3) in the preseason finale.

Although it’s difficult to get a complete read on both teams during the preseason, there are certainly some positive takeaways from the Knicks’ unbeaten stretch. They were able to squeeze by the Detroit Pistons on Wednesday night, although the Pistons were missing a few notable pieces.

Good morning to everyone but especially The Captain @J30_RANDLE pic.twitter.com/jWDsSSNx2z

Either way, there’s no doubt the Knicks have been enjoying a much better time in preseason play than the Wizards, who are winless.

Tip-off is scheduled for 7:30 p.m. ET at Madison Square Garden.

The last time these two teams played, the Knicks were without Julius Randle. They still demolished the Wizards, 117-99, with their new-look three-point barrage.

Head coach Tom Thibodeau is obviously a man that is set in his ways and his minutes distribution, but maybe this is finally the time to rest up the main rotational players and give rookies and fringe guys a chance.

New York released Myles Powell on Thursday morning, but still has other fringe guys like M.J. Walker, Brandon Goodwin, Wayne Selden Jr., and Aamir Simms to work out for their last couple of roster spots.

Simms did get more minutes than usual on Wednesday night, finishing with two points, four rebounds, and two assists through 11 minutes of action against the Pistons.

Apart from sorting out the last couple of roster spots, will Thibodeau loosen the leash on rookies Miles McBride and Quentin Grimes? While we can fully expect a tight leash for the regular season, based on last year’s experience, let’s see what they can do in a preseason game.

McBride and Grimes have only played a combined 17 minutes through the first three preseason games. We already have a sense of what the more established players can do, so let’s see some more of the new faces and younger guys out there.

RJ with the cross court feed to Quentin Grimes for THREE pic.twitter.com/ez1E1TSd5G

Washington has taken a different approach for the preseason. Although the Wizards shortened the rotation in their last clash, in part due to injuries and just trimming the lineup, they weren’t afraid to roll out 10 or more bench personnel in their first two games.

Against the Knicks the first time out, they played a total of 17 players—starters included. Montrezl Harrell seemed to be the only one who got it going against New York, piling up a team-high 18 points and 10 rebounds off the bench. Most of his production came from the free-throw line, where he was 10-for-13.

While he struggles, Harrell continues to play well off the bench. Kyle Kuzma had a great game in the five-point Tuesday loss to the Raptors, shooting 6-of-8 from deep en route to a 24-point, seven-rebound performance. Daniel Gafford hustled in the paint and finished with 14 points and 17 rebounds.

Regardless of what happens on Friday night, let’s enjoy the final preseason game and prepare for the real fun to begin when the regular season rolls around next week.

»READ: Even without Kyrie Irving, the Nets are still the Knicks’ toughest test