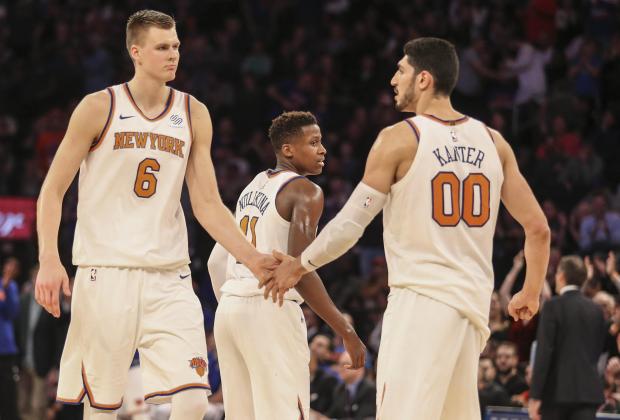 Kristaps Porzingis hopes to continue lighting New York on fire against the Charlotte Hornets tonight at the Garden.

Is it me or is it starting to feel like 2010 again? For you new Knicks fans, a little revisionist history: Amar’e Stoudemire, the “big” free agent from the summer, had just called out his teammates after a six game losing streak. Following that declaration, the team went on to win 13 of their next 14 games. They carried the momentum of Stoudemire lighting opposing power forwards up (sound familiar?) and turned what looked like a lost season into one which saw a huge trade (Carmelo Anthony’s arrival that February) and playoff basketball.

I’m not sure about a big trade, but playoff basketball sure looks good right about now. Kristaps Porzingis’ stock is rising rapidly at the moment. He has become must-see TV and is well on his way to a Most Improved Player award. The chain reaction has given the team a boost. Sunday night’s comeback win versus the Pacers was electric, with the Garden rocking and the Knicks balling.

Building off that momentum, the Knicks look to take down the Charlotte Hornets. On paper, the Hornets do not scare anyone. When you break it down a bit, facing Kemba Walker, a revitalized Dwight Howard, and possibly vengeful Malik Monk (Monk thought he was being selected by the Knicks this past draft) is no easy task.

The young Knicks have been up to the task recently. What will they have to do to keep the momentum going? Let’s break it down.

Last game’s fourth quarter was everything we could have hoped to see. Porzingis was saucing on any and everyone on the floor. Frank Ntilikina was in during crunch time and seemed to get better with each positive play. Then, with time winding down and the game tied, Porzingis trusted his new sidekick to hit the big shot. Frankie Ntillmatic came through. It may be way too early in the season for big moments, but that fourth quarter felt like a moment.

Now they must build off that moment. Frank can still come off the bench but when crunch time rolls around he needs to be out there again. The chemistry between him and Porzingis (as well as Tim Hardaway Jr., who also played well down the stretch last game) was evident. For this team to take a next step it’s those two who will have to gel. Tonight should be the start of Frank and KP sharing the floor for extended time.

Staying with that fourth quarter, let’s not forget how money Lance Thomas was. He put the clamps on Victor Oladipo, which doomed the Pacers. This should come to the shock of no one, but Hornacek relied on Thomas to defend the opposing team’s best threat, something he’s done many times before. That’s the perfect role for him on this team and one Hornacek should keep him in.

Tonight, Kemba Walker will be the main threat. He is craftier than Oladipo but is also considerably smaller. Hornacek could opt to give Frank the assignment. If things get tight late, Lance should be the one defending the Hornets’ top option.

Matchup of the Night: Enes Kanter vs. Dwight Howard

The battle of the boards. I’ve been a known Enes Kanter hater, but credit is overdue for him. He has gotten better each game and is developing chemistry with Porzingis on the way to carving out his role. That role is to crash the glass first and worry about everything else later. In his last two games, Kanter has pulled down 15 and 19 rebounds. Tonight, he draws a tough challenge in a rejuvenated Dwight Howard.

Kanter will not only have to win the rebounding battle against Dwight, but defend the pick-and-roll. The Hornets have been running a different type of offense in which Dwight is rolling without being the primary screener:

Instead of primary screener, Hornets rolling Howard to rim for oops. Great article by @rick_bonnell on this: https://t.co/ZwXArNo75V pic.twitter.com/el9qsED3jV

The Knicks and Kanter in particular will have to be aware of that. Communication on defense will be needed, but Kanter will have to avoid falling for the bait and helping on the ball. Instead of easy buckets for Dwight, the Knicks want more plays like this:

These are the plays Knicks hope to see tomorrow. Kemba high PnR with Howard a non-threat, turns into midrange jumper. (Kemba 11-34 on these) pic.twitter.com/bBpEXQWLIJ

Forcing mid-range jumpers should be the gameplan heading in. Kanter will play a pivotal role in that plan if he can stop Dwight from rolling to the rack for easy buckets.

Tip-off is set for 7:30PM tonight at MSG, with the Knicks looking to pick up their third straight win and sixth in seven tries.