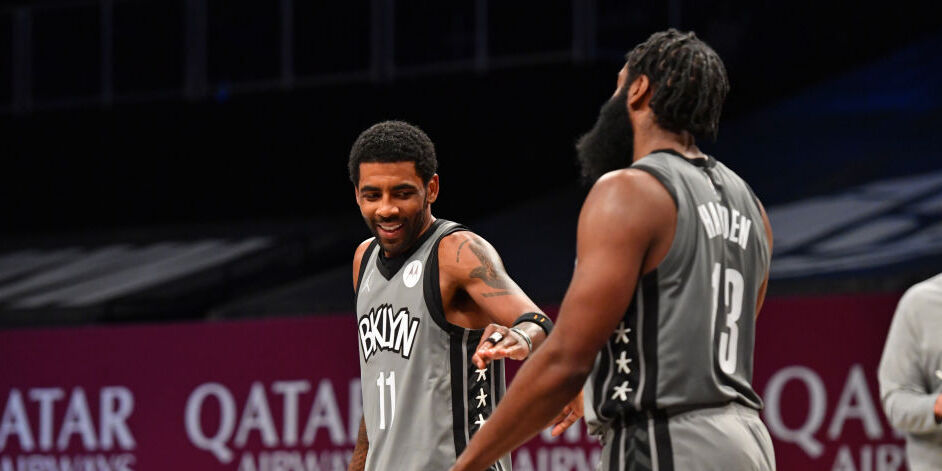 The Knicks face Kyrie Irving, James Harden, and the Nets in Brooklyn on Monday night on national television.

Tonight is a new chapter in the rivalry.


For the first time in quite a while, the Brooklyn Nets (26-13) and New York Knicks (20-19) will play a game that features two good teams. At full strength, this is a one-sided matchup: few teams have the firepower to match what the Nets possess. Tonight that will not be the case. The Nets will be without Kevin Durant, and probably Blake Griffin—but they will still have James Harden and Kyrie Irving.

Harden and Irving have been more than enough lately, with the Nets riding a four-game win streak entering tonight. Building off of the momentum from Saturday afternoon’s second half in Oklahoma City should be the goal. R.J. Barrett set a career-high, scoring 32 points to help avoid an embarrassing loss. Barrett wasn’t alone; Julius Randle bounced back from his worst performance of the season with 26 points, 12 rebounds, and 12 assists. Immanuel Quickley added 21 points off the bench.

The Knicks will need their top guns, or risk being drowned out by the storm of points from Harden and Irving.

Here are some other things to watch tonight.

Soft in the Middle

There is one weakness to this juggernaut Nets team: they’re soft in the middle. Randle will have a mismatch at every point of the game, with Nicolas Claxton presenting the only true challenge. Nerlens Noel is better at this point in time than DeAndre Jordan, tilting the battle for the paint further in the Knicks’ favor.

Relentlessly attacking the paint should be the sole focus, at least in the first half. Randle and Barrett can have tons of success if they soften the paint, opening up looks for Quickley and the other shooters.

Tom Thibodeau could craft a plan to limit one, or both, but not at the risk of allowing Joe Harris to spot-up like it’s practice. The best solution would be to stick Frank Ntilikina on one of them for 48 minutes. However, following the early foul trouble on Saturday, it is reasonable to assume Thibodeau lost some faith in Ntilikina.

That puts the onus on Barrett and Reggie Bullock to do their best to hold those scoring machines down. Surprisingly, the Knicks have not surrendered many high-scoring totals this season. Then again, they have yet to face Harden or Irving either.

All eyes are back on Barrett with his strong play over his last 11 games. Following an ugly performance against the Houston Rockets, Barrett is averaging 18.9 points per game on 53.3% shooting from the field, including a scorching 57.1% from three on a modest 3.2 attempts per game. Those are tangible results, and Barrett’s emergence has Knicks fans buzzing. A big night in Brooklyn, and the Knicks-Nets rivalry might be the best rivalry in the city.

This is more about Thibodeau than it is about Quickley, but enough is enough. It is clear that Quickley fits everything the starting lineup is missing at the guard position. If Quickley remained the backup to Derrick Rose, it would be easier to deal with, but backing up Elfrid Payton or Ntilikina to a lesser extent doesn’t make much sense.

The Knicks will have to score a lot of points tonight, so hopefully, Thibodeau yields and starts Quickley, or simply play Quickley for 30-plus minutes. Whatever works for Thibs, just make sure Quickley sees major minutes.