Knicks Look to Stay Hot Against Jazz at MSG 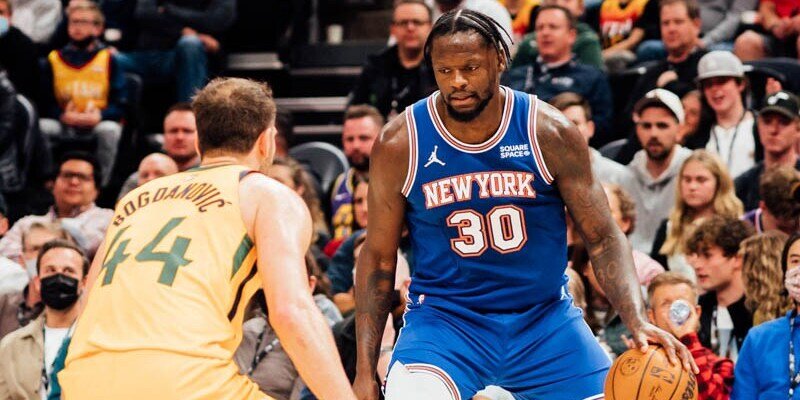 Winners of five of their last seven games, the Knicks will be tested at home on Sunday night against the surging Jazz, the fourth-best team in the West.

The New York Knicks (30-40) continue their successful four-game homestand on Sunday night against Donovan Mitchell and the visiting Utah Jazz (44-26).

The Knicks come into tonight’s matchup after a win in their last contest against the Wizards on Friday night. Led by a balanced scoring attack, they were able to squeak out of Washington with a three-point win. Julius Randle had 18 points to go along with 17 rebounds to lead the Knicks. After a rough stretch in the middle of the season, the Knicks have now won five out of their last seven games. They will need a little more of a scoring punch from either RJ Barrett or Randle tonight if they look to steal a win against a formidable opponent in the Jazz.

The Jazz come into tonight the winners of two straight, most recently against the Clippers on Friday night in Salt Lake City. The Jazz are led by the duo of Donovan Mitchell and Rudy Gobert. Mitchell is an electric guard averaging 25.7 points per game this year. He was out last game and will be playing tonight. Gobert, a perennial Defensive Player of the Year candidate who comes into tonight firmly in the race again this year, averages 2.2 blocks per game along with 14.8 rebounds a night. The Knicks will have their challenges laid out for them going into tonight.

RJ is that DUDE

Since the start of the new year, Barrett has been a different player. He has been playing with a much more noticeable drive and will to score. Lately, it feels like he can get to the rim whenever he pleases, even though he doesn’t get a lot of calls other NBA players get. Over his last 30 games, Barrett has averaged 23.8 points per game—by far the best stretch of his young career. He has made himself into a much more consistent player and looks to be taking over the role of the number one option by his play, not the decisions of the coaches. If the coaches do move the game plan to better suit RJ and not Randle, I think both players will continue to see improvement as well as the team.

RJ to Mitch lobs are so beautiful pic.twitter.com/1xrxLhkHeP

Tonight’s matchup to watch is going to be on the interior—a battle of the big men, Mitchell Robinson and Rudy Gobert. Robinson has been playing some of his best basketball of late with five double-doubles in his last full eight games played. If Robinson can hold his own against Gobert tonight and stay out of foul trouble, he will give the Knicks their best chance to win.

The Knicks are healthy besides the usual suspects out today: Derrick Rose, Kemba Walker, Cam Reddish, and Nerlens Noel.

For the Jazz, Bojan Bogdanovic, Mike Conley, Udoka Azubuike, and one-time Knick Danuel House Jr. are all out while Hassan Whiteside and Trent Forrest are questionable.

Tip-off is 7:30 p.m. ET from the Garden, airing on MSG Network and AT&T SportsNet Rocky Mountain.

»READ: 2022 NBA Draft: What to watch in the NCAA men’s tournament