Knicks Look to Build Off Big Win With Cavs Matchup 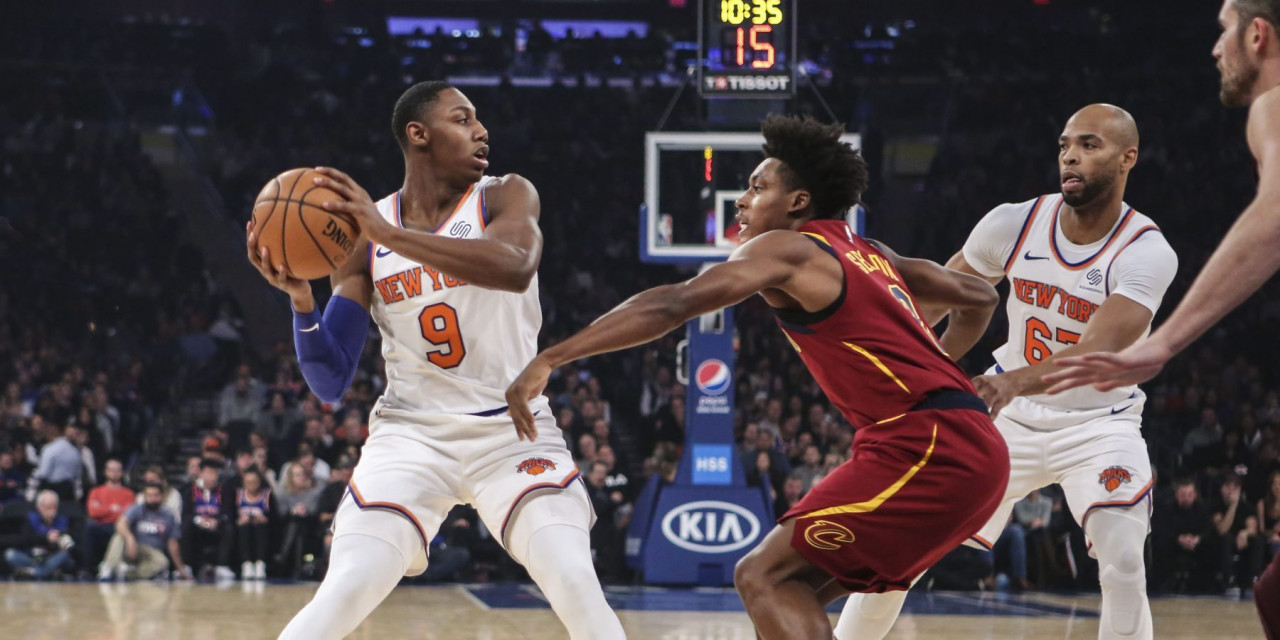 The Knicks return home after a momentum-building win over the Bucks to face a COVID-hobbled, surprisingly decent Cavs team.

After an epic comeback win at Milwaukee on Friday night, the New York Knicks (6-3) are looking to turn the page and prep for the first game of their first back-to-back of the 2021–22 season.

New York returns to action on Sunday and will host the Cleveland Cavaliers (6-4) in their first meeting of the season.

Last season, the Knicks won the regular-season series, taking two of three meetings with the Cavaliers.

While the Knicks are coming off their big come-from-behind win, the Cavs are also coming in with some momentum as well. Cleveland is entering with a three-game winning streak, gutting out close victories over Charlotte, Portland, and Toronto.

Tip-off is scheduled for Sunday night at 6 p.m. ET.

Cavs get it done by committee

It’s been an interesting start to the season for the Cavaliers. While they have some promising young pieces, they don’t have that one takeover-type of player that can carry them to victory. It’s been a very balanced approach for Cleveland, with eight different players averaging 9.9 points or more, and Collin Sexton leading the way with just 16.8 points per game.

Cleveland has a couple of players out due to COVID-19 health and safety protocols, like Kevin Love and Lauri Markkanen, but they’ve had other guys step up during this winning stretch.

Former Brooklyn Net Jarrett Allen has been one of the catalysts during this streak, reaching a double-double in each of their last three games, while averaging 21.3 points and 16.0 rebounds, and shooting an efficient 67.6% on the floor. The Knicks must box out the 6-foot-10 big man and especially limit any second-chance opportunities he can make.

Darius Garland is coming off a season-high 21-point performance, where he shot 8-of-12 overall and 2-for-3 from deep in a 102-101 win over Toronto. He’s been a bit streaky from the three-point line, but when he’s on, it opens up his game. He’s shooting 40% from long range. As a playmaker, he’s averaging 7.9 assists per game—the seventh-highest in the NBA—but also has one of the worst turnover rates and coughs the ball up 4.1 times per game. Ricky Rubio is a much better playmaker, with an assist-to-turnover ratio of 2.2 and a defensive element off the bench as well.

Sexton is another formidable guard in the backcourt. He hasn’t been the most consistent and can be a bit of a volume scorer at times, but is also a handful when he gets going. Sexton is ice cold from the perimeter through this early portion of the season, shooting just 26.2% after knocking them down at a 37.1% or higher clip in each of his first three seasons.

Lastly, keep an eye on Evan Mobley. The rookie center is averaging 13.8 points and 7.9 boards per game, but his best contributions come through on the defensive end. He and Allen have been a solid combo in the paint, and his ability to defend up front has been important for the Cavs through their first 10 games.

At the center of Cleveland’s success is its frontcourt, so it will be interesting to see how Julius Randle and Mitchell Robinson go up against them. Randle will give Allen and Mobley plenty to worry about. The All-Star is coming off a big 32-point, 12-rebound performance against the Bucks. It took him a while to get going against Milwaukee, but once he hit his stride, it was another stellar game for him. He’ll look to start strong and put together a more complete performance from opening tip.

JULIUS WITH THE TOUCH pic.twitter.com/LwvV3qZAjL

As for Robinson, he needs to rebound from his showing against Milwaukee. After playing so well to start the season, he struggled against the Bucks. It might not have been the greatest matchup for him, but Nerlens Noel provided great frontcourt minutes off the bench to make up for it. Look for Robinson to get back on track against the Cavaliers, but more importantly, help keep Allen and Mobley quiet on the defensive end.

Tom Thibodeau wanted more three-pointers this season, aiming for 37-to-40 long-range attempts per game. So far, the Knicks have reached that mark, averaging 38.7 shots per game.

They’ve also converted at a pretty good clip, shooting 37.6% from beyond the arc, the fourth-highest in the NBA.

Sunday night might be a good time to show off their three-point stroke. While the Cavs are strong up front, they haven’t been the best at defending the perimeter. They have allowed opponents to shoot 33.8% from the three-point line, which ranks 14th in three-point percentage allowed.

Although Cleveland has gutted it out to a three-game winning streak, teams have been able to shoot well against the Cavaliers during this stretch.

Charlotte shot 38.5% and drained 15 three-pointers, then the Trail Blazers made 35.1% of their threes. In Cleveland’s most recent victory, Toronto shot 44.4% from long range.

Kemba Walker is out, per the team. With the Knicks playing against the Sixers tomorrow, Walker will rest in the first game of the back-to-back.

»READ: Julius Randle has all the tools to ruin it back this season