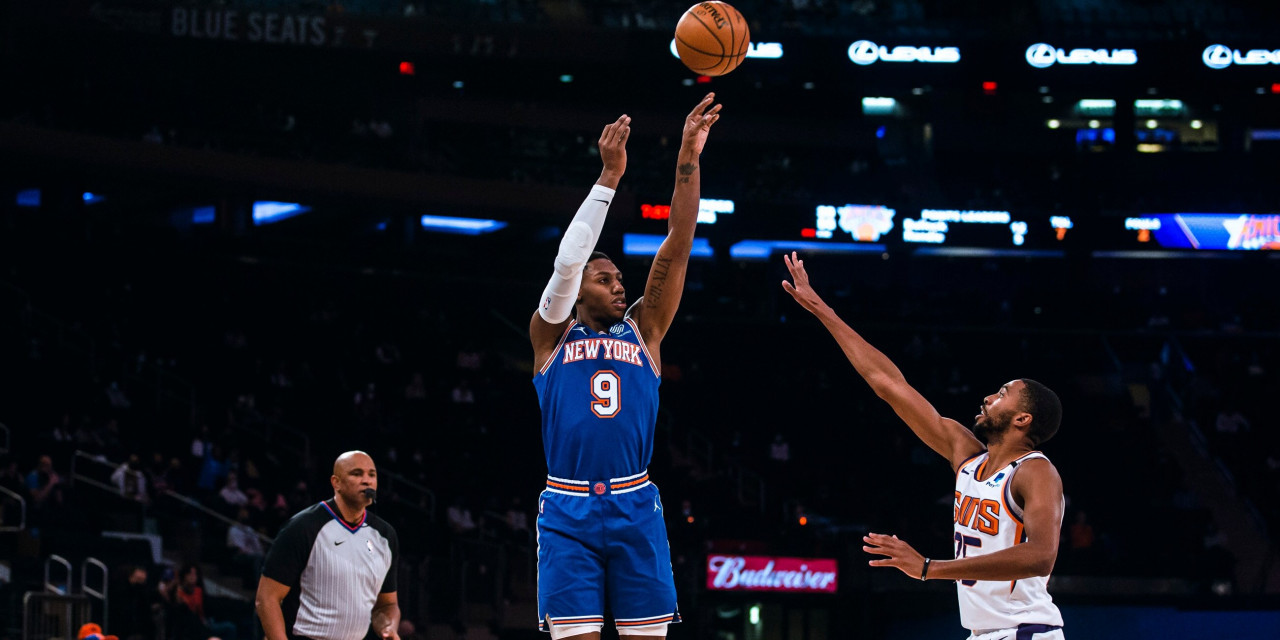 The Knicks are looking to score their first winning streak in November. To do so, they will have to hold off the red-hot Suns at Madison Square Garden.

Tonight could be quite the edition of Friday Night Knicks. The New York Knicks (10-8) will try to stop the Phoenix Suns (15-3) who arrive in New York City winners of their last 14 games.

The Knicks could start a win streak of their own if they can successfully end the streak. On Tuesday, the sharpshooting of Evan Fournier and a fourth-quarter takeover from Immanuel Quickley held off the LeBron-less Los Angeles Lakers. The Knicks were not without their own slew of injuries either; Derrick Rose, Mitchell Robinson, and Taj Gibson were all out and all three are questionable for tonight.

It will be the toughest test of the season against the defending Western Conference champs, here is what to look out for.

Immanuel Quickley needs to start. I cannot be more straightforward than that. Take your weak counters and cry about it. Quickley is the two-way player the starting lineup needs, and much like his running mate Obi Toppin, the team needs to trust the progress it saw in Vegas.

Quickley proved he can play either guard slot, so it doesn’t necessarily have to be Quickley in favor of Kemba Walker. The last game against the Lakers was just the latest example of the dynamic scoring Quickley brings. The difference in appearance when IQ is off the floor is becoming too much to ignore, another great game could help stoke the flames and forward the #StartIQ agenda.

Those F***rs Are About to Swamp Us

This matchup has heavy potential to go left. Not only do the Suns have Chris Paul, Devin Booker, and DeAndre Ayton all operating at their peak powers, they also have the best road record in the league.

The Point God, Chris Paul, comes in the league-leader in assists, and it’s not hard to figure out why.

Booker is a steady cooker. Ayton is putting together quite the rebuttal for not being extended over the offseason, averaging 16.0 points per game and 11.8 rebounds. Mikal Bridges and Cam Johnson are both connecting at high clips from deep. And Paul is the maestro for it all, averaging a double-double as well with 14.1 points per game to go along with his league-leading 10.4 assists.

The Knicks need to bring their best game, otherwise, things could get ugly.

Rowan The Warden Must Show Up

Booker will be ready to go off at MSG, that much is certain. Booker did not stay around for extra plates on Thanksgiving in anticipation for this game. The 35 points he hung on Cleveland could have been a preview for a classic Garden performance.

There was a time when an impending scoring storm from Booker would be spun as an audition for his close personal friend Leon Rose, and that Booker will be a Knick in the near future, but that time has moved on. It is no secret Booker loves playing the Knicks, especially at MSG.

Booker averages an eye-popping 30.2 points per game at The Garden on 51.2% shooting. If the New York Knicks are going to buck this trend, RJ Barrett will have to return to Rowan The Warden.

Barrett is in the middle of a Long Night scoring streak but could help his team in a big way by putting all his energy in corralling Booker. Barrett has risen to the challenge on many occasions, and tonight should be no different. Who knows, maybe this is the challenge that awakens Barrett out of his slump for good.

As mentioned previously, Rose (ankle), Robinson (concussion), and Gibson (groin) are all questionable. The lack of depth was passable last game, but a thin rotation tonight will put the Knicks behind the eight-ball before the game even starts.

»READ: Who Are Some Early Season Trade Targets for This Knicks Team?

»READ: It’s Past Due to Unleash Obi Toppin