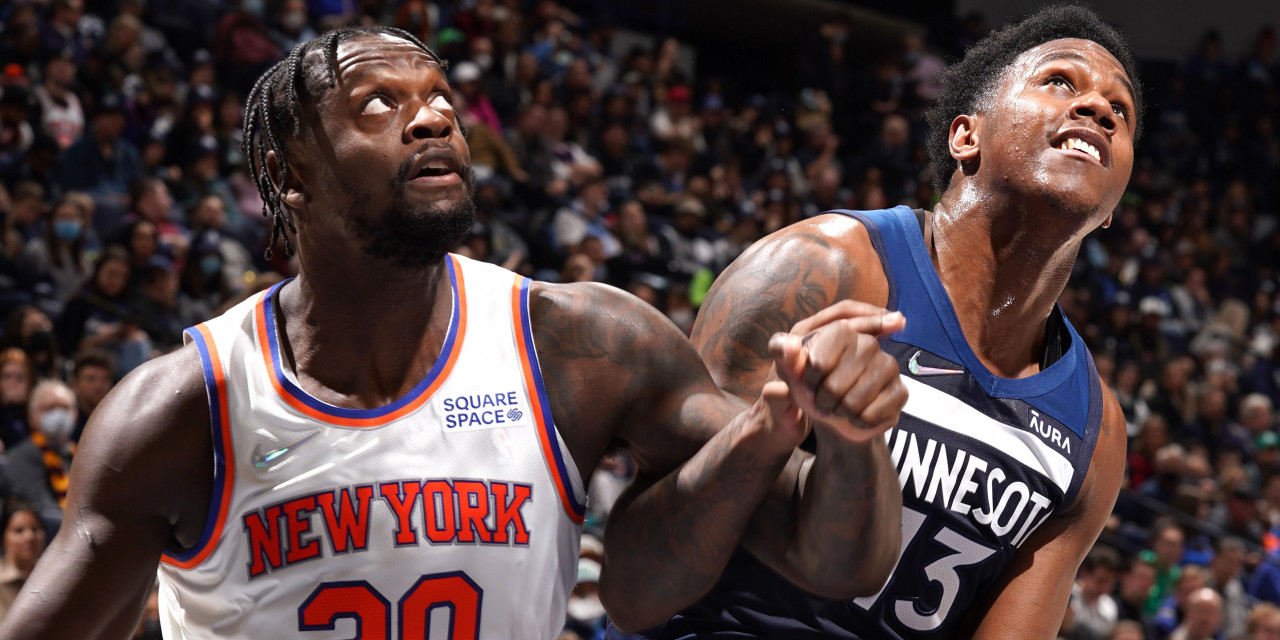 The Knicks can still stamp a solid homestand on the second night of a back-to-back as Karl-Anthony Towns and the Timberwolves visit.

The New York Knicks (22-22) are now back to .500 after suffering a crushing loss yesterday at home against the short-handed Charlotte Hornets (24-20) by a final score of 97-87. The Hornets were without their rising star point guard, LaMelo Ball, who missed yesterday’s contest with a non-COVID illness but were able to get the big win on Martin Luther King Jr Day. The Knicks presented no answer for a scorching hot Miles Bridges, who finished the contest with 38 points, 12 rebounds, and five assists while shooting 70% from the field and 55.6% from three.

New York has a chance to redeem themselves on Tuesday night at home on the second night of a back-to-back against the visiting Minnesota Timberwolves (21-22). The Timberwolves have had a nice season thus far given how poorly the last few seasons have transpired for the Twin Cities franchise. Just two years ago. the T-Wolves were selecting first overall in the 2020 NBA Draft, and now, if the season were to end today, they would be in the Western Conference play-in tournament as the seventh seed. Minnesota’s rise this season is due to a myriad of factors, like their star big-man Karl-Anthony Towns being healthy, but mainly because their first overall pick in that 2020 draft, Anthony Edwards, is simply spectacular—on and off the court.

Edwards is averaging 22.2 points per game and doing it efficiently while shooting 50.1% on his two-point attempts and 37.6% on 8.7 three-point attempts per game. Each of those shooting percentages is an improvement from his rookie year on more attempts. Edwards is a freak of nature athletically, standing 6-foot-4 and weighing 225 pounds, he’s almost always bigger, faster, and stronger than whoever is guarding him, while he still maintains a great shooting touch and certainly isn’t scared to let it fly. He and Miles Bridges actually have a lot of similarities to their games, and the Knicks had no answer for him yesterday.

The Knicks previously beat Minnesota on December 28th, 2021, when the Timberwolves’ top players were sidelined. Tip-off is set for 7:30 p.m. ET from the Garden.

Knicks Need to be Focused From Opening Tip

New York came out so lethargic and unfocused in their contest against Charlotte and cannot afford to do that again tonight. The Wolves are so dangerous offensively with their impressive trio of D’Angelo Russell, Anthony Edwards, and Karl-Anthony Towns. Russell is dynamic as a pick-and-roll ball-handler and creator. He gets to his spots in the midrange and isn’t afraid to get shots up where he’s comfortable all time. With Mitchell Robinson and Taj Gibson primarily guarding Towns, this matchup isn’t particularly great for the Knicks’ bigs. Towns is a phenomenal shooter, even recently anointing himself as the best big-man shooter of all time. The threat of Towns’ shooting could force the Knicks to switch on screens more often than usual, as Robinson and Gibson are best dropping back into coverage to protect the paint.

All of that could be a recipe for disaster for the Knickerbockers if they aren’t focused from the opening tip tonight. But with crisp, clean, and urgent rotations along with communicating on every screen, the Knicks have shown they have the personnel and discipline to have the defense “on a string” no matter the matchup.

The Knicks also need to be focused on the offensive end. They shot a lousy 40.0% from the field made only 12 of their 34 three-point attempts, while also turning the ball over 15 times. RJ Barrett twice threw the ball so wildly out of bounce, both passes being well above his target’s head. No one on the Knicks even scored 20 points on the night. This was an outlier from recent performances, especially for Barrett, but they need to clean it up tonight against Minnesota on that end as well.

The Timberwolves do not have any significant ailments. Jordan McLaughlin is out in health and safety protocols and Jaylen Nowell is probable with an ankle sprain.

Kemba Walker (sore left ankle) is questionable tonight while Nerlens Noel and Cam Reddish are out.