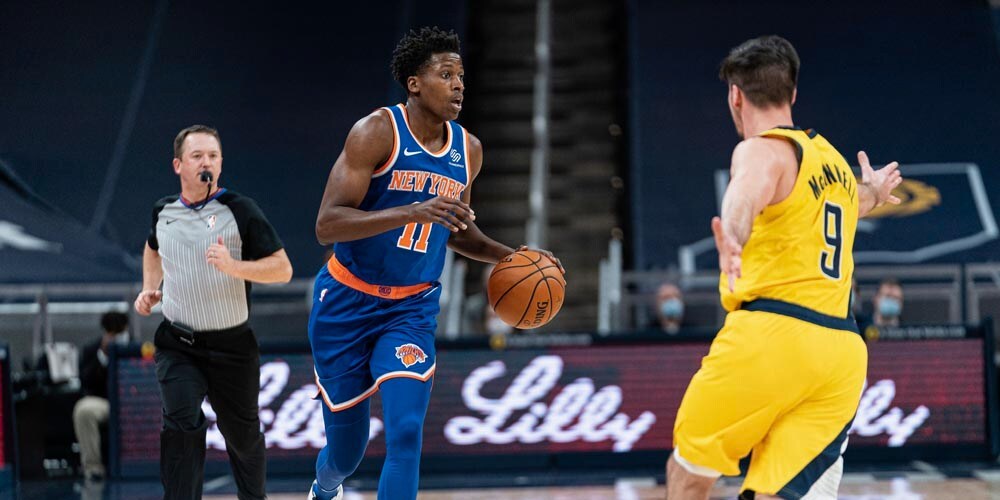 The Knicks and Pacers are virtually tied, with two other teams, in the back end of the Eastern Conference playoff picture. Tonight is a huge matchup.

The New York Knicks (16-17) are riding high after delivering a huge win in front of their fans. The first half of their season is winding down with levels of excitement no one expected out of this group. Tonight’s matchup, an 8 p.m. ET tip-off, with the Indiana Pacers (15-16) will close out this stretch of home games and offer another opportunity to make the Garden crowd proud.

The Pacers are a stronger opponent than the Kings, who New York put away with an unimaginable offensive spectacle in which three Knicks scored 20 or more points. Indiana has had a steady hold as one of the better teams in the conference, though New York technically holds the sixth seed where the Pacers are no. 8 after last night’s loss to the Boston Celtics on national television. The season series against the Pacers is split at one win apiece, with the prior two games both occurring in Indiana. New York lost in resounding fashion on opening night but earned a closely fought win in January.

Led by NBA-leading shot-blocker Myles Turner, who blocks an incredible 3.4 shots per game, the Pacers rank 12th in Defensive Rating. The team also ranks third in blocks per game and fifth in steals per game, one of just two teams to reach both marks along with the Sixers.

Domantas Sabonis, who will replace the injured Kevin Durant in the All-Star Game, is still around and wreaking havoc in the high post. He’s averaging 21.6 points, 11.5 rebounds, and 5.8 assists with a True Shooting percentage of 60.0. Malcolm Brogdon is still playing high-level basketball as well. The sharpshooting guard scored a career-high mark in New York and Indiana’s last battle, and he has passed that mark twice since then. His 21.4 points and 6.4 assists per game both lead the team. He also leads them in made threes with 2.5 per game (tied with former Knick Justin Holiday), shooting 38.3% from beyond the arc.

Every game is important for the Knicks, who are eager to return to the postseason and find themselves in a volatile spot in the Eastern Conference. Defeating the Pacers would help the Knicks get a leg up in a packed playoff race, with fourth and 12th places separated by three games. A New York victory would also put the team at a .500 record, which it hasn’t reached this late in a season since the 2017–18 campaign.

R.J. Barrett has looked to utterly destroy the Pacers so far this season. Whether he looks to re-live the spirit of the ’90s Knicks or is out for vengeance for defeating New York in the 2013 playoffs, the young Knick has the knack when facing Indiana this season. He has tormented the Pacers more than any other team, averaging 25.5 points per game on 63.3% shooting from the field and 7-of-8 from downtown across two games.

GREAT bounce back game from RJ Barrett tonight, let @kylemaggio take you through the highlights 🎥 pic.twitter.com/PowLmYrytX

The Pacers frequently throw double teams at Julius Randle, allowing Barrett to get more open looks. Although he still isn’t a super-efficient scorer, he has made Indiana pay for their transgressions of letting him get wide open. Especially since the team no longer has Victor Oladipo, a strong and athletic wing, Barrett may very well continue his red-hot scoring stretch against the Pacers.

Nerlens needs to step up

As TKW’s Jesse Cinquini recently detailed, Nerlens Noel has done an admirable job filling Mitchell Robinson’s place in the starting lineup. Although his sloppy hands make it hard for him to catch passes, an infuriating and common occurrence, he’s been keeping New York’s defense afloat during his stint as a starter with Robinson sidelined.

Noel gets the block on one end and a dunk on the other off the feed from Julius pic.twitter.com/yQfLKUe5wJ

Noel’s field goal percentage has increased from 53.2% as a bench player to 67.7% as a starter. The Knicks post a +2.3 Net Rating during Noel’s minutes as a starter compared to a -1.1 NetRtg with him as a backup, per NBA Stats. Noel has brought his elite shot-blocking to the starting lineup with him, blocking 12 shots since becoming a starter, which ties for the seventh-highest mark since then.

However, he faces a tough task tonight against Myles Turner. For one, Turner is a floor-spacing big. While his 31.6% shooting from deep isn’t intimidating, he does command attention since he shoots so frequently from behind the arc, which pulls Noel away from the rim that he protects so well. When on offense, Noel will have a tough time finishing against the most effective shot swatter in the league. Turner leads the NBA in total blocks, blocks per game, and block percentage, all with sizable margins.

Elfrid Payton missed his first game of the season on Thursday due to soreness in his right hamstring. It’s unclear if he will play tonight against the Pacers, but Knicks coach Tom Thibodeau labeled it day-to-day as recently as yesterday, per Newsday‘s Steve Popper.