Knicks Looking for Third Win in a Row Against Cavs 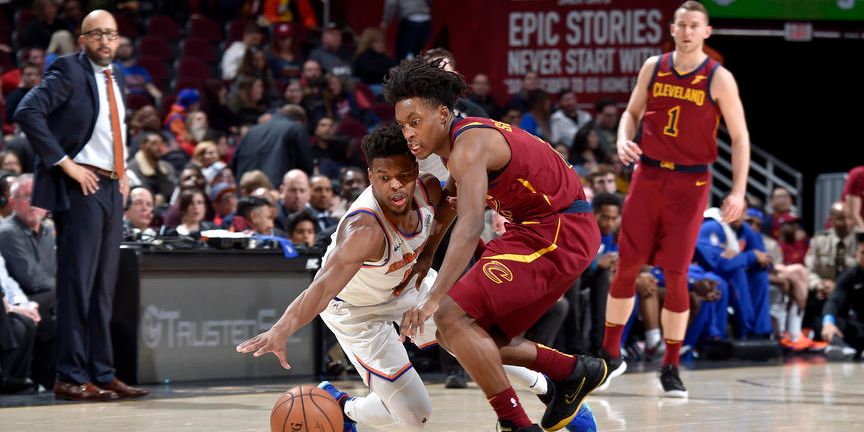 Fresh off their second consecutive win, the Knicks look to catch fire Thursday against the lowly Cavs.

After rallying from a 16-point deficit and beating Orlando on Tuesday night, the New York Knicks (13-48) will match up with the equally awful Cleveland Cavaliers (14-47) tonight at MSG.

Having picked up two Ws in a row now, the Knicks are looking for their second three-game winning streak this season.

The Cavs have been in the same boat as the Knickerbockers this year, riding out the remainder of the season with hopes of the draft lottery saving them in the summer. Their rookie one guard Collin Sexton has been a bright spot for Cleveland, averaging 15 points, three boards, and three assists on the season.

The Knicks lost their first two tilts to the Cavs this season with a combined deficit total of 10 between the previous losses.

Tonight’s game will be a battle between the two worst teams in the Eastern Conference. Both the Knicks and Cavs will be heading toward the top of the draft in the offseason, looking to pick up one of the young studs coming out of college.

Currently, Cleveland and New York are owners of a bottom-three record in the NBA with Phoenix at the number one spot, the Knicks behind them by a game and a half, and the Cavs in the three-hole by a game. While both teams have almost completely secured top lottery odds, since the top-four worst records are awarded an equal shot at landing the first pick, the Cavs and Knicks could still increase their chances a bit with a few more Ls down the stretch.

A Knickerbocker win tonight would tie the two teams for the second-worst record in the league, while a Cleveland win would put the Cavs two games above New York.

Mitchell Robinson was a huge factor in Tuesday night’s win against the Magic, putting in work on both ends of the floor. In 33 minutes of play, he picked up 17 points, 14 rebounds, six blocks, and three steals.

Robinson showed out on defense per usual, locking up the paint and at one point blocking four shots in four minutes. He was also able to contribute on offense, getting himself open down low over and over again. The rookie center finished the game shooting 6-of-9 from the field.

If Mitch Rob can play a another monster game tonight, New York will have a good chance at picking up another win.

»READ: Tim Kohut: Can Mitchell Robinson be the Knicks’ (new) big man of the future?