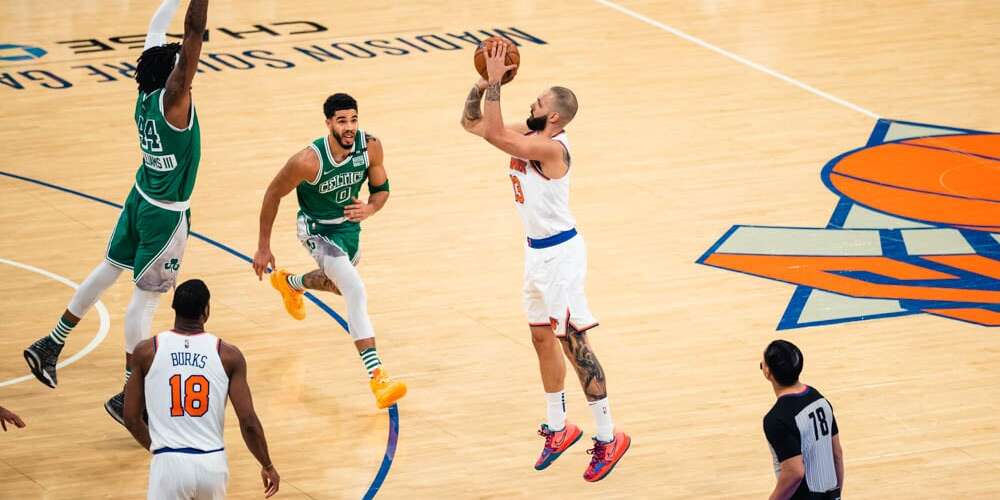 After a surreal moment at the Garden, the Knicks are in Boston looking to quell any counters by the Celtics in order to return to .500.

The New York Knicks (19-20) will be looking to seal the season series with a win when they face the Boston Celtics (18-21) for the second time in three nights on Saturday.

New York overcame a 20-point deficit for the second time this season when RJ Barrett banked and thanked as time expired on Thursday at Madison Square Garden, while Evan Fournier continued his exploits against his former side.

Off the back of a scoreless effort Tuesday against Indiana, Fournier erupted for a career-best 41 points in 42 minutes on Thursday night including 10 made three-pointers, tying J.R. Smith for the franchise single-game record.  In three games this season against the men in green, Fournier has averaged an outrageous 35.0 points, 6.3 rebounds, and 6.7 three-point makes per game on 55/54/60 splits.

This game will also mark history because some of New York’s online sportsbooks have (finally) launched today. Now that it’s live, fans do not need to go out to the casinos to place their bets and can do it from the comfort of their own home. It has been a long process, but it’s a good start to the new year. Just in time to get bets in for the game. Today, the Knicks are underdogs by about six-to-seven points.

Evan Fournier erupts for a career night vs. the Celtics in an instant classic.

While the Frenchman was outstanding on Thursday evening, he will need to back it up in Boston. Fournier has been wildly inconsistent this season, posting four games with 25-plus points but conversely 15 where he has failed to crack double digits.

The Knicks’ main man Julius Randle has been in good touch after returning from health and safety protocols, averaging 26.0 points and 12.0 rebounds per game on 50% shooting in the last two games. Randle has looked much like the player of last season with the ball in his hands recently. He torched Indiana with his mid-range game and overwhelmed the Celtics by attacking the paint from the second period onwards.

New York can’t let the euphoria of the moment distract them, as there are certainly areas to tidy up in Saturday’s contest. Boston blew the game open to a 25-point difference in the second quarter on the back of nine made threes in the period. The Knicks had 17 threes rained down on them by Boston, 13 by the Raptors last Sunday, and 18 by the Thunder last Friday.

However, there are signs of improvement overall as in their last 10 outings the Knicks have the fifth-best Defensive Rating in the NBA and allow the second-least number of points per game in this stretch due to keeping six of their opponents below triple figures.

Two of the four opponents New York did not hold below 100 were the Celtics and they will again have their hands full.

Jayson Tatum was simply sublime last game, finishing with a 36-6-9 state line on splits of 57/55/100 in his second game out of health and safety protocols while Jaylen Brown is fresh off a streak of 10-straight 20-plus point games, including a 50-piece last Sunday, which snapped on Thursday night.

Boston has been a team to especially exploit the Knicks’ lack of three-point defense, as they’re knocking down on average 18.3 triples against New York, mainly due to moving the ball and the defense. The Celtics have dished out an average of 26.3 assists per game against the Knicks (above their season average of 22.7), which would place them fourth in average assists overall.

Led by Robert Williams III, Boston is the second-best shot-blocking team statistically with 5.9 denials per game. The Celtics sent back 10 shots on Thursday, and it is something New York, specifically Barrett, needs to be aware of. The “Time Lord” had seven rejections overall and turned away Barrett five times.

On the injury front, Kemba Walker (left knee), Ryan Arcidiacono (left ankle) are listed as out while Evan Fournier (contused left thigh) and Nerlens Noel (return to competition reconditioning) are questionable. For Boston, Payton Pritchard (health and safety protocols) and Brodric Thomas (back) are out.

New York currently leads the season series 2-1 against the Boston Celtics and only 14 points have separated the two teams through three games. It is always challenging to beat the same team twice back-to-back with teams often countering and adjusting. Tom Thibodeau needs to be ready to pivot and adjust to come away with an important immediate and longer-term win.

Saturday’s game time is slated for 7:30 p.m. ET and will be broadcast on NBA TV and in both local markets on MSG Network and NBC Sports Boston.