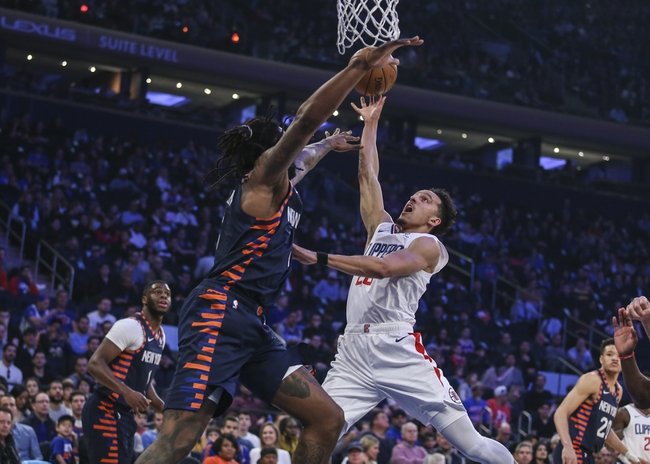 Despite solid performances from Emmanuel Mudiay and DeAndre Jordan, the Knicks lost their 60th match of the season in a matinee against the Los Angeles Clippers.

The number 60 holds significance in New York. It represented the great home run race of 1961 between Mickey Mantle and Roger Maris. It was the number Carmelo Anthony had to pass to capture the single-game scoring record at Madison Square Garden.

This 60 is not so glamorous. Today was the 60th loss of the season for the Knicks.

Last time the Clippers took on the Knicks they beat the young ‘Bockers to a pulp, 128-107. When today’s game tipped off, it appeared like a redux was in order. But David Fizdale was not about to let the Clippers rinse his guys again.

Following a Clipper 8-0 run to open the game, Fiz chided his starters. It was the most animated he has been in a huddle this season—he didn’t let his starters sit down during the timeout. His guys got the message. Led by DeAndre Jordan, the starters responded with an 8-2 run of their own, and finished the quarter down just 20-18. Defense kept the game in reach.

Offensively, the Knicks continue to struggle to generate points—particularly beyond the arc. They shot 2-for-14 from deep in the first half. Despite their ineptitude from distance, DeAndre Jordan and Emmanuel Mudiay kept the pressure on in close range.

The duo spearheaded the 10-0 run to give the Knicks their first lead of the game, 53-51. Jordan capped off the half splitting a pair of free throws to head into the locker room down just one, 60-59.

The good vibes were wiped away when Kevin Knox landed on Pat Beverley, forcing him to exit the game.

The third quarter was another uphill battle. Knox and Ntilikina were ruled out for the remainder of the game, putting more onus on guys like Mudiay and Jordan to pick up the slack. The pair responded, keeping their team within striking distance. Mudiay and Jordan combined for 44 of the team’s 84 points heading to the fourth.

An amazing thing happened during the first portion of the final frame. The ball started to move around. The ball movement was the catalyst for a run that saw the Knicks knot the score at 96-96. The game stayed tied or close to it for the remainder of the game.

Ultimately the numbers game won out. The Clippers are now 35-1 in games they lead after three quarters. The reason for their success is their depth.  That depth, personified by the play of closer Lou Williams, eventually wore the Knicks down.

It was a redemption performance after the embarrassment in their first meeting. But a loss nonetheless. The 60th of the season. The good news? There’s only eight games left.

March has become the month to start looking towards next season. Every Knick game is now viewed through a scouting lens; what’s the team’s glaring issue, and which prospect can fix it?

The answer to that question is quite easy. It’s offense. Fizdale has pushed the debut of his offensive system enough times Jay Electronica has started to take notice. There is not one guy on this roster who can go out and carry the load.

Points were tough enough to come by with Dennis Smith Jr. and Allonzo Trier playing. Without them, scoring points is like pulling teeth. Damyean Dotson, DeAndre, and Mudiay kept the team afloat, but that is not a consistent source. The Knicks are in dire need of an alpha.

Kevin Knox—who may miss some time after going down at the end of the first half—is not ready. Smith is the best hope at the moment, but his jumper is not reliable enough to trust.

The top priority in this draft should be finding that alpha. Whether it comes in the form of an earth shatterer like Zion, a cerebral maestro like Ja Morant, a relentless attacker like R.J. Barrett, or a calculated assassin like Jarrett Culver, the Knicks need it.

It is only fitting that the old man on the roster has the most energy for a noon game. DeAndre Jordan was the sole reason the Knicks were not blown out of the building from the jump. He brought the fight to his former team from the opening tip.

He finished the first half with 14 points, seven rebounds, three assists, two blocks and two steals. Bigger than any of his ferocious dunks or rebounds was his effect on the young guys. Jordan led by example today, keeping his team in it long enough for his youngsters to wake up.

Accompanied by Emmanuel Mudiay, DJ led the charge to keep the Knicks down just one heading to the half. Without them, this game could have easily had the running time of a 1980 Mike Tyson fight. DJ would add six more points, seven more rebounds and one more assist to finish with an impressive 20-14-4-2-2 line.

Mudiay has been the target of the frustration among fans, but today he was fantastic. The main gripe about Mudiay is his standing with Fizdale in comparison to Frank Ntilikina. Mudiay has had a Jon Snow-Robb Stark dynamic with Frank, with Knick fans playing the role of Catelyn Stark. Fizdale has allowed Mudiay (and Knox) a longer leash, while Frank was tossed to the side even when healthy.

Today Mudiay earned every minute of court time. He led the team in scoring with 26 points on a day where his teammates couldn’t hit the ocean from the sand. There is no question Mudiay’s midrange prowess is unsustainable—ask Trey Burke if you doubt it—but it’s not so bad to watch on an occasional Sunday afternoon.

Why won’t the basketball gods allow Frank to flourish? Why must they take our son away yet again? If you didn’t notice, Frank Ntilikina played six uneventful minutes before taking a powder. At halftime the team announced Ntilikina would miss the rest of the game with a sore groin. It is reasonable to expect that with eight games left, this could be the end of Frank’s sophomore season—and maybe his Knick career.

Frank wasn’t the only Knick to go down. Knox sprained his ankle late in the first half and did not return. If the injury is significant enough, his season may also be done.

These two were the sole reason the Knicks played well today, so it’s only fitting they collaborated for the top two plays of the night.

Mudiay to DeAndre for the alley and the Knicks are FINALLY on the board. pic.twitter.com/VwuXeUsLBi

Even in limited minutes, Mitchell Robinson manages to do something good. Mitch extended his streak of consecutive games with at least two blocks to 22 games. This season has had its downs, but at least we have our big man of the future.

Damyean Dotson had a rough day from three (1-of-8), but managed to score 18. Dotson’s development has been one of the more encouraging storylines of the second half of the season.

Kadeem Allen continued to capitalize on playing time. He was a key figure in the fourth quarter comeback and finished with 16 points on 54.5 percent shooting. If Frank does indeed miss the rest of the season, Allen could play his way into a bigger role.