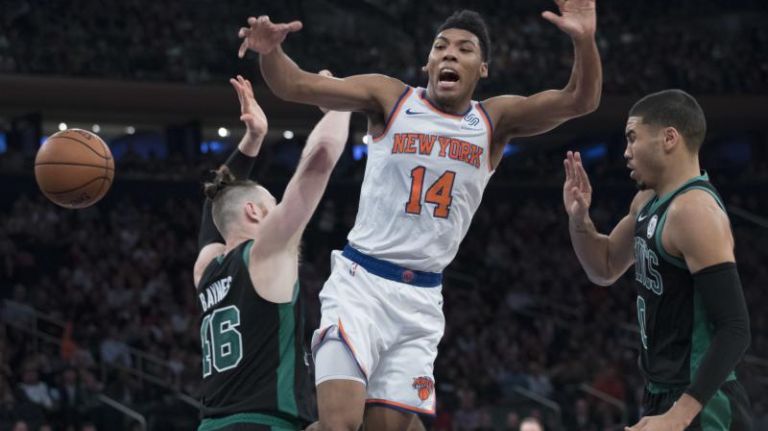 Despite an exciting game that went down to the wire, the Knicks tacked on another loss.

It’s no secret that the odds were stacked against the Knicks from the start. The Eastern Conference title favorite Boston Celtics were in town. With a young, unproven team going against a contending squad, things didn’t look good for the Knicks at the beginning of the game, as a hot start for Boston and another slow-to-get ready performance by New York saw the Knicks trail by as much as 16 initially. Combine that with an ankle injury from first-round draftee Kevin Knox, and it looked like a disaster in the making for the Knicks.

However, the Knicks were able to get a boost of energy from their bench, which propelled them back into the game. They maintained that energy throughout the rest of the game and demonstrated resilience, but they ultimately fell short, losing 103-101 to the Celtics on Saturday night.

It seemed like whenever Boston was pulling away, New York would answer and claw their way back into the game. Unfortunately for the Knicks, the game was out of reach in the closing seconds of the game. After a pair of Jayson Tatum free throws made it a three-point game, with less than eight seconds to go, Trey Burke was fouled while attempting the game-tying triple to send the game into overtime. He needed to make all three to keep the Knicks’ hopes alive, but he missed the first and made the second. Needing an offensive rebound on an intentional miss, he banked one off the rim, but the ball fell into the hands of the Celtics to secure the game.

Tatum finished with a game-high 24 points and 14 rebounds. His teammate, Kyrie Irving, provided some timely baskets, but finished with 16 points off of a lackluster 5-of-16 shooting performance.

It was a disappointing finish for the Knicks, who overcome double digit deficits numerous times and made the second half a closely contested fight to the finish.

After spotting Boston a 31-18 lead after the first quarter, the Knicks started to find a rhythm on the floor thanks to the play of their youngsters—Damyean Dotson and Allonzo Trier—who combined for 17 of New York’s 30 second quarter points. Trier began the second quarter of play strong, while Dotson closed things out with back-to-back treys top off a nice run before halftime. The Knicks outscored the Celtics in the second quarter, 30-19, to cut down Boston’s lead to just a two-point margin, as the Celtics clung onto a 50-48 lead at the break.

The Knicks fought hard in the second half, although they trailed for a majority of the game. They battled to the tune of nine ties over the last two quarters of the game, but couldn’t overtake the Celtics in the waning minutes.

Tim Hardaway Jr. played a much better second half, leading the Knicks with 24 points, three rebounds, and three assists. Enes Kanter provided a 17-point, 15-rebound performance, tallying his third-straight double-double to start the season–a feat that hasn’t been done since Zach Randolph did so in 2007. Trier chipped in 15 points, while Dotson had 10. Burke had 11 points, nine assists, and two steals in the loss.

The Knicks fall two 1-2 for the season and will resume action on Monday, Oct. 22, when they head on the road to take on the Milwaukee Bucks. Tip-off is scheduled for 8 p.m. ET.

Other takeaways from the game:

With 1:45 remaining in the first quarter, Kevin Knox went down with an ankle injury, as he was driving towards the basket. He was fouled on the play, although that wasn’t the reason for the fall. Knox was helped off the court by Mario Hezonja and Noah Vonleh, and he put little to no weight on his left ankle. Early diagnosis said that his x-ray was negative, and that it was an ankle sprain. There is no official timetable for his return yet.

There was another injury scare midway through the second quarter, as Trier also had a hard fall while attacking the basket. However, he was able to shake it off and keep playing.

Knox will join Courtney Lee on the injury list, who is still out with a neck injury. Lee is listed as day-today.

Mitchell Robinson returns to the court

Robinson returned to the court for the first time since the season opener against the Atlanta Hawks. The 7-foot-1 center made a brief appearance against Atlanta, logging a single minute of action before checking out with an issue with his ankle. It lingered into Friday’s game with Brooklyn, although David Fizdale seemed to have been able to play him. On Saturday night, he played 9 minutes against the Celtics, scoring one point and grabbing two rebounds.

The Knicks will be back in action on Monday night against the Bucks in Milwaukee.