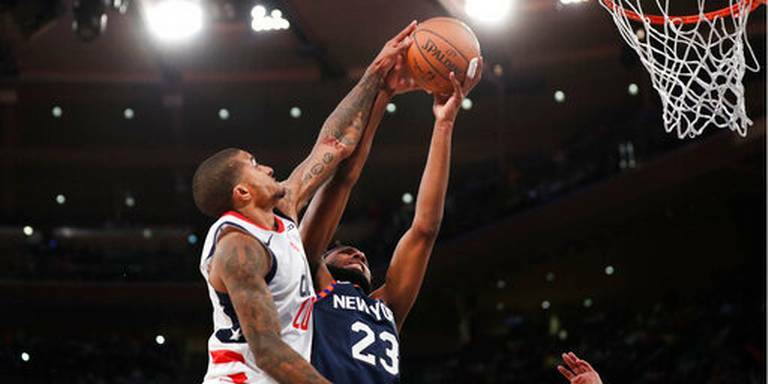 The Wizards, mostly comprised of fringe NBA players and G Leaguers on Monday night, wound up beating the Knicks on their home turf.

In the New Yrok Knicks’ last home game of 2019, they delivered one of their infamous fake comebacks, losing 121-115 to the Washington Wizards. New York now sits at 7-24 on the year.

The Wizards, 9-20, were without eight players tonight due to a slew of injuries and a suspension for Isaiah Thomas. Although 10 players competed for Washington, they were mostly made up of fringe players and G League call-ups like Gary Payton II, who D.C. signed hours before the game.

New York started off hot, scoring 37 in the first quarter and building a 13-point lead. The Knicks bullied the Wizards in the paint, made their first eight free throws, and added three triples for good measure.

The MAPLE MAMBA 🍁 🐍 showing off the post game!! pic.twitter.com/Cqz078DaeH

The happy times stopped once the Wizards switched to a 2-3 zone late in the first quarter, which they used throughout the rest of the game.

A lineup full of G League players locked in on defense and brought the game to a tie in the second quarter. Payton II and Anzejs Pasecniks, in particular, did a lot of damage.

Payton brought terrific energy on defense and made some hustle plays offensively. Pasecniks scored 10 points in five minutes across the first and second quarters with all of his shots coming in the paint.

The Knicks entered halftime up by one point but fell behind by five points just one minute into the second half, prompting a timeout from interi head coach Mike Miller. Washington’s lead grew to 13 with just under nine minutes left in the third quarter.

The Knicks entered the fourth quarter down by three points. Their defense was picked apart the whole quarter. Beal didn’t score until five minutes into the frame.

The Wizards earned the biggest lead of the game at 17 points with just under five minutes left, but New York cut the deficit down to three points with 48 seconds left. A successful defensive stand by Washington gave the Knicks the ball with 24 seconds remaining. New York failed to score on two possessions and lost by six.

Julius Randle led the way for the ‘Bockers, scoring a season-high 35 points as well as adding five rebounds. R.J. Barrett recorded 18 points on 8-of-15 shooting, and chipped in six rebounds and four assists. Elfrid Payton finished with a game-high 12 assists.

The Wizards were led by Bradley Beal, who shot a career-high 38 field goals. He converted on just 13 of them, finishing with 30 points and four rebounds.

Robinson blocked three shots in each half and added 13 rebounds and six points. He still dealt with foul trouble, though; he committed two quick fouls in the first seven minutes of the game and came out six minutes into the second half when he recorded his fourth personal.

Still convinced Mitch doesn’t have a timeline because he BLOCKS EVERYTHING pic.twitter.com/LvJwWWRAt3

Knox played rather poorly. The only positive thing he did was make a couple of good passes to open teammates on offense. He finished with eight points and three rebounds on 2-of-8 shooting from the field, including 1-of-4 on three-pointers. He had a plus-minus of -16, the worst of the game.

The Knicks were treated to a Festivus miracle in the form of a terrific Julius Randle performance. He crossed his season-high of 30 points with over seven minutes left in the game, ending with 35.

Back to back 3s for Julius who is simply ON tonight. He’s been in his bag. pic.twitter.com/jwsrMbpLlw

Randle made his first four shots and shot 11-for-21 from the field, 4-for-8 from 3, and 9-of-9 from the free-throw line. One interesting thing to note is that Randle didn’t bring the ball up at all. He let whatever point guard he was playing with do the honors. He also did his best to hold down the fort in the frontcourt on defense.

Barrett started guarding Beal. The rookie stuck tight with Beal around screens and locked in when Beal had the ball. However, he found out quickly that guarding the All-Star guard was no walk in the park. Beal made his first two field goals and Barrett got some help from Elfrid Payton, who took a few possessions to guard Beal.

Payton and Barrett split time guarding Beal to start the second half. Dotson and Frank Ntilikina guarded him when the other two were out.

Even though Beal shot poorly at 34%, he drew attention from the entire New York defense. The Wizards set screens and made the right passes to get buckets for other players. They came out after each quarter with terrific energy, building big leads after the second and third quarters and tearing one down after the first.