Knicks Lose Fourth In a Row, Drop Game in Sacramento 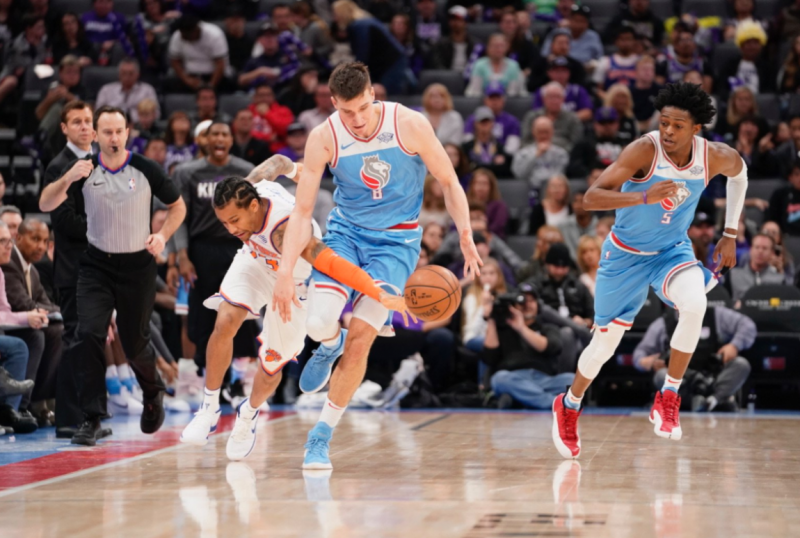 The Knicks got off to a cold start and kept their struggles throughout the game, losing to the Kings.


The Knicks, dropping their 40th game of the season, put in a shameful effort in Northern California on Sunday night. They were defeated in Sacramento, helped by them trailing by 12 after one quarter. They went into the locker room trailing by five points, sticking around with the lowly Kings. Thanks to the efforts of Bogdan Bogdanovic, Skal Labissiere, and others, the Kings triumphed over the Knicks. The tank rolls on. A few thoughts:

• We’ve been re-configured to think that losing is good. And at this point, it is! But it likely won’t matter. Take a look at the standings:

My lottery standings from yesterday. Knicks could finish 0-21 and have a hard time getting higher than 8th https://t.co/ZGuRtUYtqj

We can always root for the losses, but they can only drop so far. Luckily, I’m confident in the prospects that the Knicks will be able to nab in June.

• Enes Kanter had a double-double at halftime, notching 12 points and 11 boards after just 24 minutes. Good for you! Congrats buddy! He finished with 14 and 16. Kanter’s effort is undeniable, so let’s commend him for that. But we know he’s not impacting winning at this point.

• Big Kyle O’Quinn game. 14 points, eight rebounds, four assists, three blocks. This is the type of role player that you want on winning teams. His future may not be with the Knicks, but his impact off the bench is incredible. You have to love this guy.

• Trey Burke played just seven minutes in the first half. He played most of the second half, playing 18 out of a possible 24 minutes, finishing with 11 points and six rebounds. It sure feels like he should get as much burn as he can handle, no matter the cost for the rest of the roster. At this stage in the season, he should never have a game where he gets fewer than 10 shot attempts per game, so let’s not let him do less than he did tonight, okay Jeff?

• Five assists for Frank Ntilikina in the first half. Nice work from our rookie. Answer for this!

Nominated for Best Picture: The story of a frustrated fanbase that wants justice for their young point guard.

Frank Ntilikina is the center of attention in Three Billboards Outside Madison, Square Garden.#OscarsSoKnicks pic.twitter.com/sPtuNUptnE

• Losing to the Kings is an embarrassing feat. The loss is fine, but it’s bad.

The Knicks will be back in control of the tank on Tuesday in Portland. Tip at 10 p.m. EST.