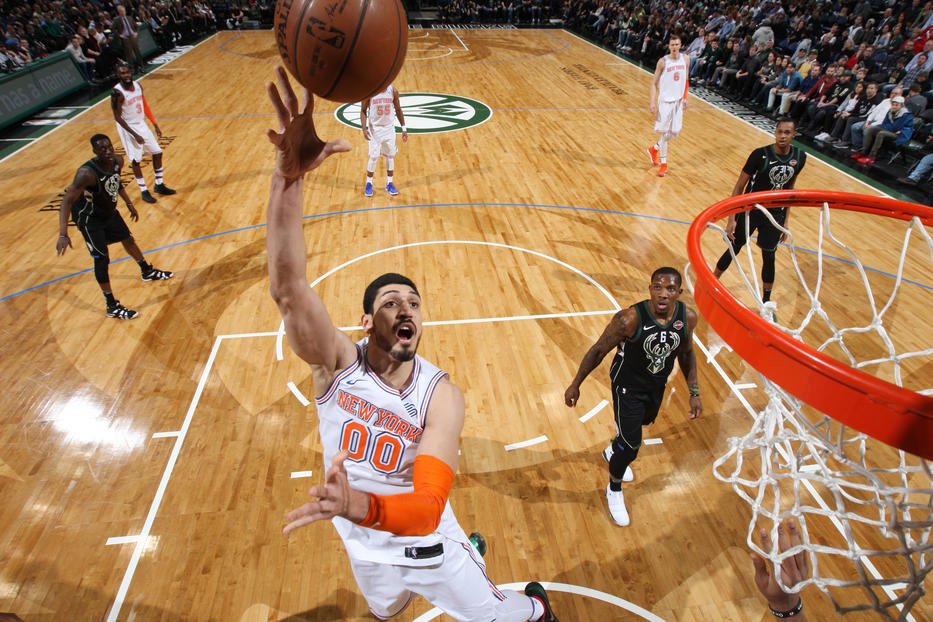 Giannis Antetokounmpo buried the Knicks on Friday night as another road affair ended with a loss for New York.

The Knicks were in Milwaukee on Friday night, looking to eradicate the stink from the horrid loss in Boston on Wednesday night. They played the Bucks to a draw in the first half, with the second quarter horn buzzing seeing the teams knotted at 55. In the second half, the teams brought it down to the wire, with the final two minutes deciding the contest. The Knicks and Bucks have made a habit of playing close games, with multiple games last year hinging on just a few possessions in the waning moments of the fourth quarter. This one did not finish in favor of the Knicks. Giannis Antetokounmpo stuck the final dagger in the proverbial heart of this Knicks team, finishing a spinning layup over Enes Kanter with 1.9 seconds remaining. Tim Hardaway Jr.’s attempt at the buzzer went awry, and the Knicks fell to 23–30.

Ntilikina commits the turnover and snatches the ball right back pic.twitter.com/LdmPVaqwfm

Ntilikina to Kanter to close out the third

Before we file this away as the latest chapter in “Excruciating Losses: The Complete Collection,” let’s have a brief discussion about Jeff Hornacek. I don’t think there is any rush to get rid of him, and I also don’t think he’s one of the worst five coaches in the NBA. He may be close though. From not putting Kristaps Porzingis in the best spots, to refraining from shooting threes despite having a squad that shoots the fifth-best percentage from deep in the league, to insisting on giving Jarrett Jack serious burn there are lots of areas to be upset. Let’s focus on just one part here.

Jeff Hornacek chose to close this game with his starting unit of Jack, Lee, Hardaway Jr., Porzingis, and Kanter. Against the Bucks, this is an embarrassing deployment of resources. Frank Ntilikina should always be closing games due to his defensive prowess and ability to switch onto forwards, so that’s the first thing. To task Kanter with getting switched onto Giannis with the game on the line is indefensible. As a coach, you have to know that the Bucks are going to go for exactly that. As I mentioned before, give Kanter credit; he stuck with Giannis and contested the shot well. But if Kanter is on the bench, it’s likely KP that switches onto Giannis instead of KP having to give up the switch like he did, which I would tend to believe he did so lackadaisically because the coaching staff told them to switch on everything:

When it comes down to it, this game won’t be any different than the other agonizing games the Knicks have lost in crunch time. Jeff Hornacek will likely last the season, and I don’t even know if the Knicks would be able to land a replacement markedly better than him, but he is often out-coached in situations that he should not be.

The Knicks are back in action on Super Bowl Sunday against the Atlanta Hawks. Tip at noon.