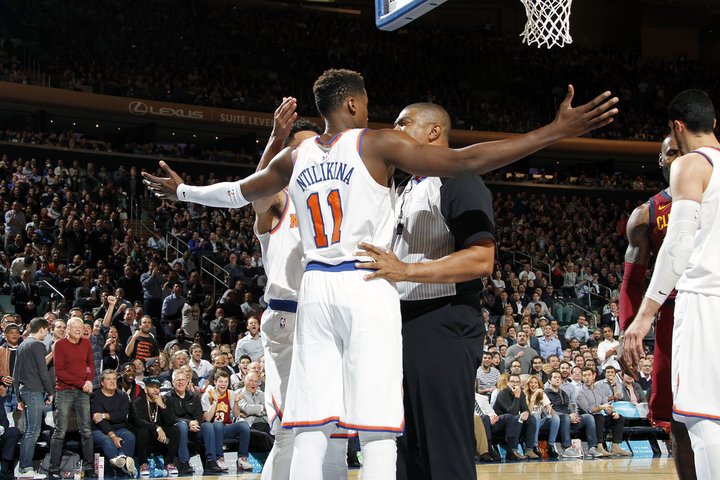 Despite leading for the majority of the game, the Knicks fell at home on Monday night in gut-wrenching fashion.

In a much anticipated match-up, the surprising Knicks hosted the underwhelming Cavaliers at MSG on Monday night.

The main story entering the game was undoubtedly how Frank Ntilikina and the Knicks would respond to comments LeBron James made earlier this week in which he said Dennis Smith Jr. “should be a Knick.” Knicks fans and players alike came to their rookie’s defense in recent days, and tensions on the court quickly boiled over with Enes Kanter and Frank getting involved in a miniature scrap with LeBron in the first quarter.

New York came out firing, and Cleveland simply couldn’t match their energy in the first three quarters. It was the fourth quarter that proved crucial for the Cavs, in which they finally heated up and outscored the Knicks 43-25. While they ultimately came up short, the Knickerbockers showed some serious promise against the reigning Eastern Conference Champions.

Let’s take a deeper look at Monday night’s battle in the Garden.

The first quarter featured one of the most exciting moments of the entire Knicks season when Frank got physical with LeBron after a dunk, sparking an altercation between him and Enes Kanter that had to be broken up by the referees.

Enes Kanter WILL NOT BACK DOWN.

If anything, this quarrel demonstrates the camaraderie this team has already developed in the young season, as well as their aggressiveness. It was especially cool to see Frank unafraid to back down from LeBron, and go at him throughout the game.

Kanter and Hardaway Jr. Lead the Way on Offense

While it wasn’t enough to put them over the edge, Hardaway Jr and Kanter were the primary reason New York’s offense performed so well for most of the game.

As we’ve seen multiple times this season, THJ tends to step up his game when the number one option in Porzingis is either struggling or out of the game. With KP in foul trouble and generally not playing like his usual self, Timmy did it once again, hitting shot after shot and finding open looks for his teammates. He finished with 28 points on 10-of-20 shooting and racked up 10 rebounds and five assists as well, playing the most balanced game of any Knick all night.

Timmy gets the TOUGH basket to go to keep the Knicks ahead!

As for Kanter, the motivation stemming from LeBron’s comments that he “always has something to say” surrounding the Dennis Smith situation was probably what gave him the push to play extra well against Cleveland. The Turkish big man was snatching boards, scoring consistently, and even dropping a few nice dimes.  In what was one of his best performances all season, Kanter dropped 20 points on 9-of-15 shooting and grabbed 16 rebounds.

Not to mention, he almost fought LeBron. GOAT (buy the merch).

With the most attention on him since he got to the league, Ntilikina had another solid game. While he played his usual offense, looking for the pass and taking open looks, where Frank stood out Monday night was on defense. He racked up a total of SIX steals in 24 minutes, including ripping LeBron more than once.

While the scoring just isn’t there yet, Ntilikina has showed some serious potential this young season. Any player that can play great defense and consistently find open looks for his teammates at 19 years old is something special.

Not to mention, he almost fought LeBron.

Raise the banner for Frank. pic.twitter.com/adAmQA2i2X

KP just didn’t look like himself against the Cavs, forcing shots and overall playing passively. This might have been due to foul trouble that put him on the bench early in the first quarter, which could have shaken up his rhythm for the rest of the night.

While he did come through in the final minutes of the game with a clutch three to extend New York’s lead, it was a missed free throw by KP that allowed Cleveland to tie it up late in the fourth quarter.

Kristaps finished with 20 points on 7/21 shooting, along with seven rebounds. While these numbers don’t seem too bad, we’ve grown accustomed to seeing KP go off every night, and a seven rebound game just shouldn’t be happening too often.

The Knicks just seem to specialize in playing well until the fourth quarter, which has to change. Seriously, these games are breaking my heart. New York picked up their sixth loss of the season Monday night and now hold a record of 7-6, good enough for the sixth spot in the east.