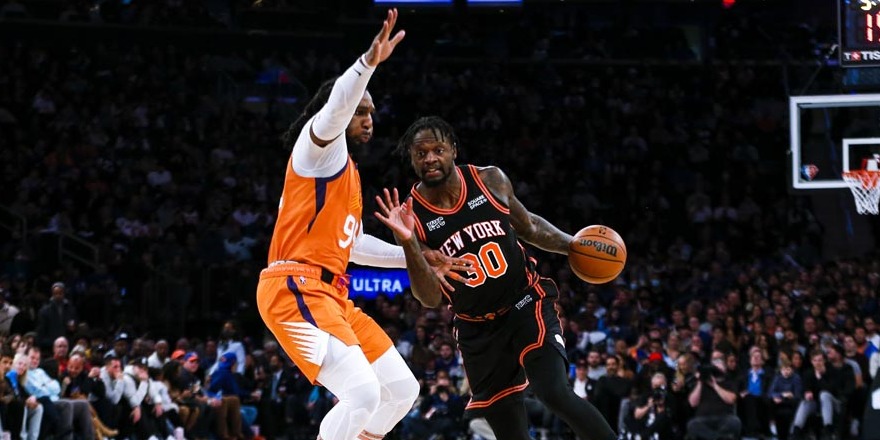 The Knicks squandered another double-digit fourth-quarter lead and lost to the Suns. Cam Johnson delivered the death blow with a buzzer-beater from deep.

The New York Knicks (25-38) began their final West Coast road trip of the season by traveling to the Footprint Center in Arizona to take on the only 50-win team in the NBA, the Phoenix Suns (51-12). The Suns were without future Hall of Famer Chris Paul, who missed his fifth straight game.

New York was without Derrick Rose, Nerlens Noel, Quentin Grimes, and the birthday boy, Obi Toppin, who suffered a left hamstring strain in New York’s loss in Philadelphia. In a game that went down to the wire in Phoenix, the Knicks lost at the buzzer on a career night from Cam Johnson by a score of 115-114. The Knicks have now dropped seven games in a row.

Julius Randle got off to a hot start, keeping the Knicks afloat in the first quarter scoring 14 points while the rest of the team combined for just 10. RJ Barrett had a rough start to the evening as he began the night on 0-of-5 shooting but was able to contribute some in the second quarter, scoring 10 of his own.

Suns forward Mikal Bridges got off to a quick start, scoring 11 points in the first quarter. He was the lone Sun to score double-digit points in the first half and took over the scoring reigns with Phoenix’s top gun, Devin Booker, who was out due to health and safety protocols. Cam Payne had eight first-half assists, matching the entire Knicks team up to that point. Phoenix also hit nine three-pointers to take a 58-55 lead into the second half.

The Knicks began the second half on a 10-2 run with a combination of defense and three-point shooting. The Suns were able to fend it off early in the period but the Knicks starters would prove to be too much, as they got hot from long distance. Alec Burks and Evan Fournier led the way with a combined six three-pointers made in that period.

With 2:40 left in the third quarter, Randle got into a shoving match with Johnson and was assessed a pair of technical fouls, causing an automatic ejection and ending his stellar night early. Randle left the game with 25 points on 50% shooting to go with seven rebounds and four assists. The ejection would galvanize the rest of the team as they picked up the slack. New York scored 38 points in the third, taking a 12-point lead into the fourth quarter.

The Knicks dominated the glass, out-rebounding the Suns 49-33 behind an outstanding performance from Mitchell Robinson. He had 17 points and 15 rebounds, nine of which were offensive rebounds, as well as four steals and a second-chance shot that gave the Knicks the lead with 15.6 seconds remaining. Every other Knick starter scored double-digits tonight.

RJ was clearly fouled but MITCH TAKES THE LEAD pic.twitter.com/9Ted6hCHrg

Barrett had a rough night, shooting 6-of-26 but managed to score 20 points and hit seven of his 10 free-throw attempts. Fournier had 16 points. Immanuel Quickley scored 13 points to go with eight rebounds. Burks recorded 16 points, nine rebounds, and six assists. Unfortunately, Burks also missed a clutch free throw that left the door open for the Suns to win the game.

Johnson, the night’s hero, had an exquisite evening for the Suns, scoring a career-high 38 points (21 of which came in the fourth quarter) and connecting on a career-high nine three-pointers. He kept the pressure on New York by hitting clutch shots, including a three-pointer to tie the game with under three minutes left and then a buzzer-beating triple to win it.

Cam Johnson was CLUTCH for the @Suns knocking down the #TissotBuzzerBeater to win it!

🔆 Cam had 21 PTS and 6-7 3PM in the fourth-quarter alone! pic.twitter.com/uQEk2REzSt

Payne scored 17 and had a career-high 16 assists on the night. Bridges took a back seat after a hot start, ending his night with 20 points, six rebounds, and four assists. Jae Crowder, who struggled most of the night but hit two clutch triples in the fourth, finished with 14 points and seven rebounds.

All in all, it was another heartbreaker for the Knicks as they continue to fall in the standings. Hopes of landing an unlikely play-in spot are dwindling by the day. Next up, the ‘Bockers head to Los Angeles to take on the surging Clippers, who have won five games in a row.

»READ: Analyzing The Disappointing Guard Class of The 2022 NBA Draft

»READ: Is Cam Reddish Locked Into The Knicks’ Rotation at This Point?

»READ: Mapping Out an Ideal, yet Realistic, Potential Roster For Next Year’s Knicks