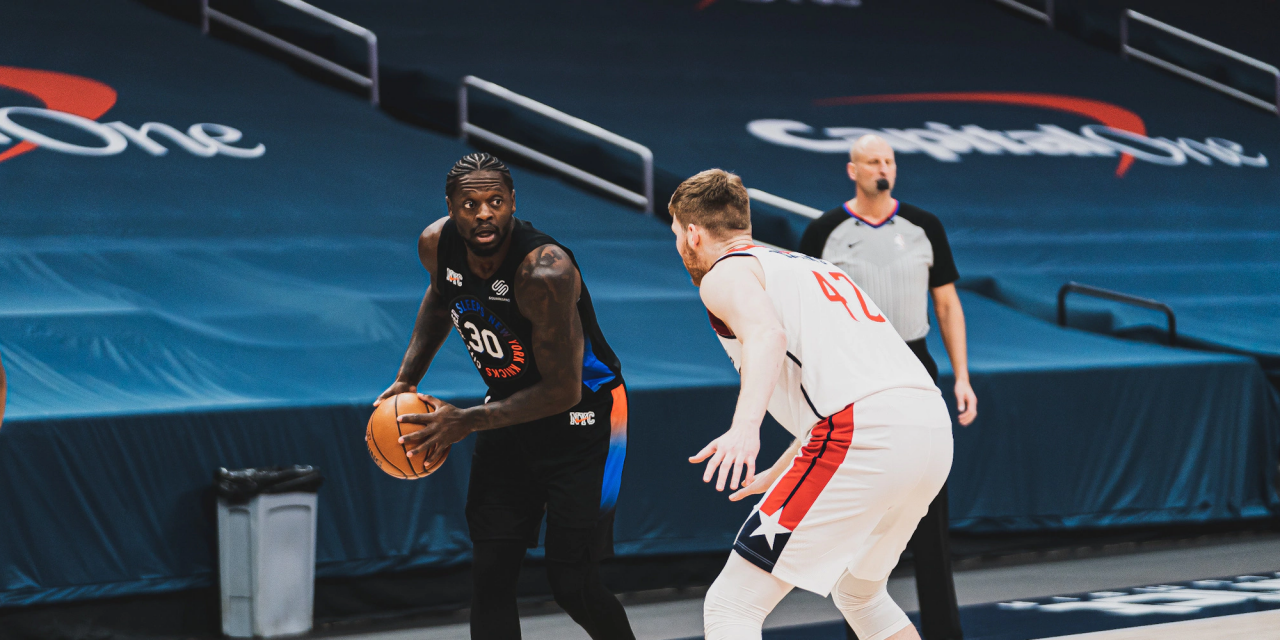 The Knicks cruised to a road win over Russell Westbrook and the Wizards but lost starting center Mitchell Robinson in the process.

The New York Knicks (12-15) decisively thumped the Washington Wizards (6-17) 109-91 to improve their road record to a respectable 7-9. As usual, it was Julius Randle who carried the torch for the Knicks—he scored 23 points and dished out four assists in 32 minutes of play. New York also received a scoring punch from their two reserve point guards—Immanuel Quickley and Derrick Rose combined for 30 points on 11-for-26 accuracy from the field.

LOOK how much space Julius has with REAL guards on the floor. IQ knocks down the 3 off of the kickout. pic.twitter.com/6xc3OBZ8N9

The Knicks once again wreaked havoc defensively and never allowed the Wizards—who mustered just 91 points—to obtain any semblance of cohesion or rhythm on the offensive end. Washington shot 26.5% from distance and 38.2% overall.

Robinson stood out as one of the top performers on either side. He managed to compile a double-double of 10 points and 14 rebounds in the first half alone. Since entering the NBA, Robinson’s bread and butter has been offensive rebounding, and he feasted on the glass tonight, even compared to his standards. Alex Len, Washington’s man in the middle, frequently rotated off of Robinson to contest shots at the rim. As such, the Wizards never put a body on the seven-footer, who with five offensive boards outrebounded Washington’s entire team in the first half.

Robinson did more than generate second-chance opportunities. He excelled as a pick-and-roll threat as well, diving to the rim with precision and purpose and accumulating a few scores at the dunker’s spot for his efforts. While Robinson put together an impeccable game offensively, the energy he exerted on that end didn’t affect his influence on the other. Robinson was characteristically imposing as a rim protector. He didn’t come up with any blocks, but he contested and altered several point-blank looks and stayed out of foul trouble with just one personal foul. Although these contests won’t show on the stat sheet, what matters is that his work resulted in misses. All in all, Robinson was all over the place in this one. He significantly impacted the game for the Knicks in his 20 minutes of game time, compiling a fantastic plus-minus of +17, the best mark of any Knick across the first two quarters.

Despite an undeniably brilliant showing from Robinson, his night came to an unfortunate and untimely end at halftime thanks to a right-hand impingement. Here’s to hoping this injury is benign and Robinson can make a swift return to the starting lineup.

Russell Westbrook was held in check

Sans their best player and franchise cornerstone in Bradley Beal, the Wizards needed a big scoring night from Westbrook to come away with a victory. Statistically speaking, the Wizards are one of the worst defensive teams in the league, meaning it was evident that the Knicks would have no trouble scoring. But New York arguably has no offensive weapons of Westbrook’s caliber when he has it going, which is why the Knicks wanted to avoid a high scoring affair at all costs. Fortunately for the orange and blue, they accomplished this goal with flying colors, thanks to forcing Westbrook into an unspectacular game.

Elfrid Payton, who’s garnered his fair share of flak this season for valid reasons, did a commendable job of guarding Westbrook one-on-one. While not a superb on-ball defender, Payton is bulky and powerful for a player of his stature; he utilized his physical profile to keep the ever-athletic and explosive Westbrook in front of him and away from the basket. Payton’s pressure shifted Westbrook’s gameplan from scoring to playmaking, a fact that worked in New York’s favor considering Washington’s mediocre ancillary talents. Westbrook did produce as a playmaker with ten assists, but he was also quite careless and sloppy with the ball, as evidenced by his five turnovers.

When all was said and done, it took Westbrook 22 shot attempts to score 23 points—a number hardly above his season average. This is no small feat considering the offense revolved around Westbrook in the absence of Beal. The Knicks continue to prove that they belong in the discussion among the very best defensive teams in the NBA.

»READ: Immanuel Quickley’s point guard potential may be at odds with the Derrick Rose trade