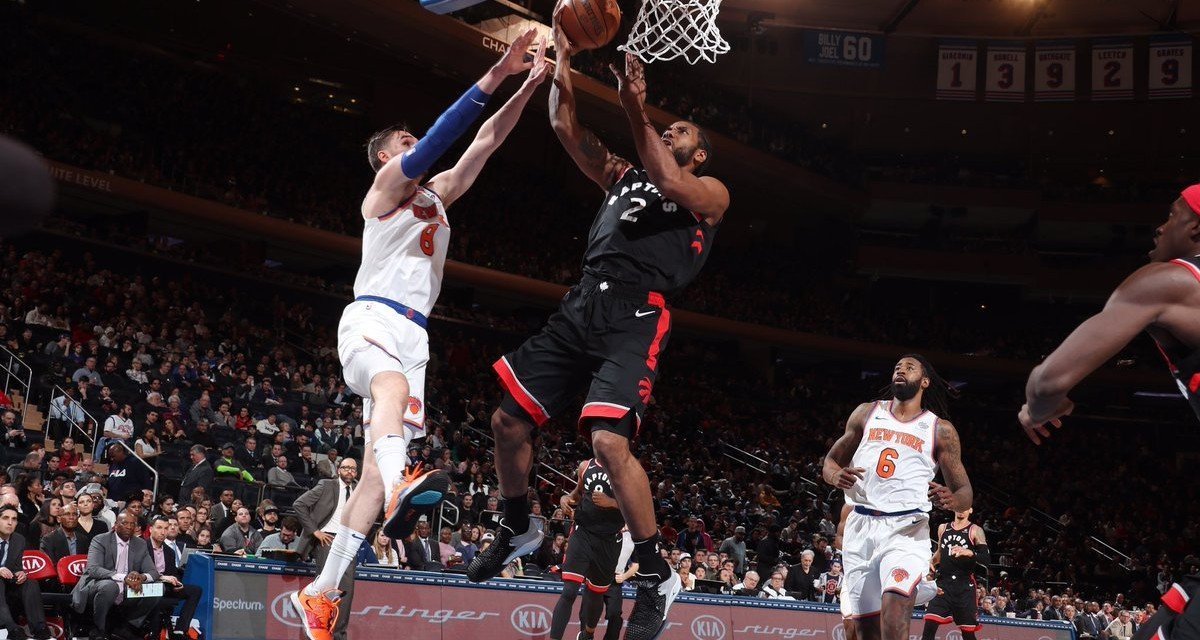 In a low-scoring affair, the New York Knicks couldn’t find enough offense down the stretch to take down the second-best team in the East, the Toronto Raptors.

Let the losses stack up. The Knicks are now on the precipice of being all-time losers. Tonight’s 104-99 loss is their 16th in a row, tied for the longest single-season losing streak in franchise history. Despite the outcome, this game—highlighted by strong defense—was not the eyesore last night’s game was.

It has been a long time since the Knicks (10-45) started a game by kicking their opponent in the teeth, so tonight’s start was a treat. Their 14-0 run in the middle of the first quarter was a glimpse at what Fizdale wants. A big reason he moved on from the Enes Kanter, and now Noah Vonleh (replaced by Mario Hezonja), was to play at a faster pace.

For a little more than five minutes, the Garden felt like the Garden. It was a pleasure to watch the Knicks play basketball. The Raptors (41-16) regained control at the end of the quarter by pumping the brakes and forcing the action to the halfcourt. In close quarters the talent gap tends to reveal itself, and the Raptors have the heavy advantage in the talent department.

A frenetic first quarter pace led to tired legs in the second. It was a rock fight the Raptors narrowly won, 21-19. The defense of Hezonja, Damyean Dotson and DeAndre Jordan masked troubles the offense had generating points in the half-court. Jordan in particular was the best man on the floor for the Knicks in the first, cleaning the glass for 11 first-half rebounds.

The opening minutes of the third had the makings of a classic “third quarter Knicks,” with the Raptor lead ballooning to 13. Then a duel between Kevin Knox and Kyle Lowry saved the day. Knox slightly outscored Lowry, 10-8, but both of Lowry’s three pointers kept the Knicks at bay. The Knicks cut the deficit from the 13 down to as low as three, but as Lowry did earlier in the quarter, Norman Powell hit a flurry of threes himself to keep the Knicks at bay.

The fourth quarter offered a similar narrative to the third, close but not close enough. Kadeem Allen and Mitchell Robinson, the most unlikely sources of offense, helped keep their team in it. Allen finished the night with 14 points to go along with six assists, four rebounds, and two steals. But as we said, the Dinos shut the door on any run. Danny Green hit three trey balls to keep the lead secure.

Another Knox three—he shot an impressive 44.4 percent from deep tonight—cut the lead to 99-96 with a little over a minute. Once again, the Raptors did just enough to keep the lead safe, this time for good.

DeAndre Jordan was more than an expiring contract in the Porzingis trade. Dennis Smith Jr. has dazzled, but Jordan is not far behind. It looks now that there was no axe to grind between Fizdale and Enes Kanter; Kanter just wasn’t the center he had in mind. Jordan, on the other hand, is the veteran center Fizdale envisioned deploying.

Fizdale mentioned playing faster when he decided to cut Kanter off for good. His actions since then have backed every word up. Mitchell Robinson is the future, but he has a lot to learn. Jordan and Robinson are cut from the same cloth; Robinson projects to be a prolific shot blocker and oop-catching extraordinaire.

Jordan was just that for the Lob City Clippers, and still has some juice left in his tank.

Once Fizdale irons out the kinks of DJ’s minutes—not playing him over Robinson to close games—this will be a fruitful mentorship.

The best moment of the first half came during the 14-0 run in the middle of the first quarter. When the Knicks are running, they are a completely different team. Knox benefits the most from this playing style. In the infant stages of his career, Knox’s two best shots are his floater and transition three.

Hezonja’s move to the starting lineup seemed to do the trick. Mario was able to replicate similar activity on the boards we have grown used to from Vonleh, pulling down six boards in his first eight minutes.

Smith Jr. might be the lead man Fizdale has been desperately looking for all season. His tenacity has been a welcome sight, and his propensity for highlight-reel plays makes him a seamless fit for Broadway.

Despite DSJ’s welcomed play, Kadeem Allen was the best guard for New York tonight. In the best game of his NBA career, Allen was active on both ends of the court, finishing with 14 points, four rebounds, six assists, and two steals without turning the ball over.

Just think, this time next season the man on the other end of that pass will be Zion Williamson.